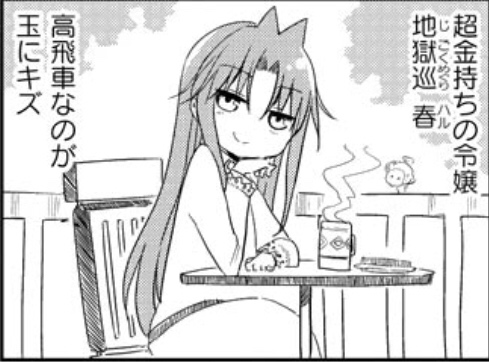 What does キズ mean here? It does not seem to be 傷 (wound/injury), and since it’s katakana I suspect it’s some kind of slang but I did not find anything on zokugo-dict...

In this case, キズ is part of a set phrase which is 玉にキズ or 玉に傷 (lit. A scratch on the jewel) which is analogous to the English version A fly in the ointment.

The phrase then means that it's a small annoying something that sours the mood of enjoyment or success (similar to how a scratched jewel isn't as beautiful as an undamaged one, and is as such a minor annoyance or flaw).

高飛車なのが、玉にキズ
(Her being) domineering is the "scratch on the jewel (lit.)"

A very loose translation that is probably truer to an English tone is:

She thinks she's on top and that's her (only) flaw.

Special thanks to Chocolate and By137 for the point-outs.

玉 refers to a precious stone.
瑕 is a flaw, an imperfection.

A precious stone which would otherwise be very valuable and expensive, loses most of its value due to a small imperfection.

According to the site below it comes from an ancient Chinese proverb.
http://yain.jp/i/玉に瑕

Not the answer you're looking for? Browse other questions tagged translation meaning manga or ask your own question.

5
Hikaru no Go Manga - dialogue question
3
「あんたもマンガだ！！」 - how to understand it?
2
What does らいたい mean here?
2
What does ぼうしのどんぐり mean on this page of Yotsuba&!! ?
5
What does そうするの mean here?
1
What does “なかなか” mean here?
2
Meaning or nuance of 調きょ?
2
Why is “学校があるからお休みが染みるんだなあ” a poem?
2
What is the meaning of 月 in this sentence?