Handwritten kana that looks like ヤダ, but I can't find ヤダ in a dictionary

studying Japanese for some months now I, began translating some Japanese sentences written on pictures or drawings. Unfortunately I came across a drawing with handwritten kana that I cannot clearly identify. 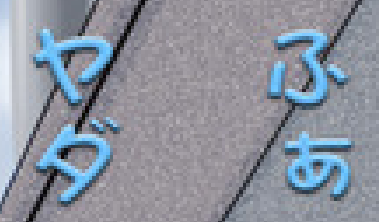 It's quite simple to read the both right kana, being ふぁ, I suppose they are pronounced as [Fa] and shall be a sound of relief, like "Ah" or "Phew".

But the two left kana are quite hard to identify for me, as I'm used to computer-written signs. So I'm not even sure whether this is Katakana or Hirakana... The first kana could either be ヤ or や (although therefore the small dot at the top would be missing). But neither Jisho.org nor Google Translator gave any useful hints what the lower left kana is supposed to be... It might be ダ so the resulting term would be ヤダ [Yada]. But is that reasonable? No Japanese dictionary knew this term. Of course it's highly probably that this is just another term to describe a sound made by the speaker. But [Yada]? I can't imagine a reasonable equivalent nor an emotion, which the sound [Yada] could transmit. Thanks a lot for your help!

It is written in katakana, probably for emphasis.

Not the answer you're looking for? Browse other questions tagged colloquial-language kana writing-identification or ask your own question.

6
What is that expression used to generally mean "...is what I would say, but..."?
3
Is there a term for words that share the same kana spelling?
1
Something that can be written with kanji but not with kana?
2
Is there a standard way to clearly differentiate similar handwritten (kana) characters?
-1
Can't find this handwritten kanji/kana?
0
た ち つ て と -> だ ぢ づ で ど (ta chi tsu te to -> da dji dzu de do) - Why is it different from all the other kana that can get dakuten?
5
What are these Okinawan kana-like characters?
2
Because I cannot find the root verb in any dictionary, what does をしめて回った mean in this sentence?