Why do I often see guys saying 何をしているの

Isn't の at the end considered feminine? Also, what should I use if I want to sound masculine or gender neutral? 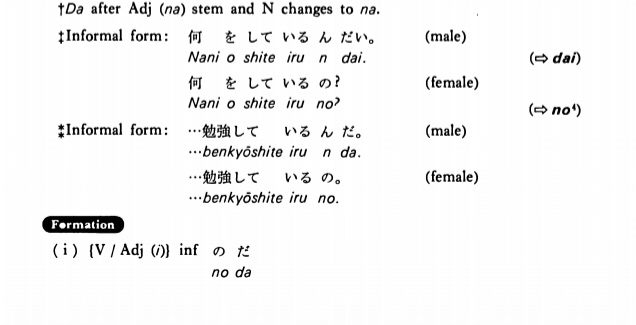 That chart is not incorrect but maybe a little misleading. Here's my impression (I dropped を and い because it's usually dropped in informal sentences):

I agree with the discussion at the link that DXV sent. I also agree with DVX's implication that the image you sent may be outdated. Please let me elaborate:

For the specific phrase:

I think the tone of one's voice is more important than the actual use of の at the end. It is possible to say this in a masculine way, a feminine way, and a gender-neutral way, simply by modulating your voice.

I also think that the image is missing an important third possibility:

This sounds masculine to me, and

Considering the image you sent, if I knew:

then I would say:

However, this doesn't mean it is always possible to associate 何をしているの？ with a specific gender.

So I think an updated version of the image you sent might say:

Using ん or の indicates a reason when giving an answer. An answer for a reason would end for "~のです" for "that's why...". ん is more common is spoken (informal) language and the です is either omitted or changed to だ.

Thus the question "何{なに}しているの?" is asking the reason for "what are you doing?" or "what are you doing that for?". Notice that it gives emphasis in much the way as the phrase in English. Of course, this is also achieved with tone of voice. If you aren't sure which to use "何{なに}し[ている]{LLH}?" with a rising pitch accent is gender neutral.

It is acceptable for men to use the "feminine" forms at times but it is considered more blunt if women use the "masculine" form. Notice that feminine form more closely resembles the polite "何{なに}をしているのですか？" as it would be written. In general, using だ instead of です is more often used by men in Japanese.

19
What is the proper use of だろう, is it “masculine”, and how is it different from と思 【おも】う?
14
What is the implication when a gruff old man ends a sentence with わ?
3
What are the different ways of saying to agree or disagree with a person?
3
「ね」 vs 「な」 in 「そうだね」 /「そうね」/ 「そうですね」
4
Saying something was happening when something happened
6
Saying “Hello” to family members?
3
How to say “I want to see A doing this”?
4
Better to say my 人柄 is 保守的 or 引っ込み思案?
0
What is this 英語だと implying?
4
Difference between である and だ in the written form