In the context of a C19th print of the actor Iwai Hanshirō, the publisher’s name and address is included: 長谷川丁十九バンチ 福田熊治良枚. How should the last character 枚 that comes after Hasegawachō jūku banchi Fukuda Kumajirō be understood and read? The references I have for 枚, mai, are “counter for flat objects (e.g. sheets of paper),” or bira, “bill, handbill, flier, leaflet, poster, placard.” Why is it placed directly after the name of the publisher Fukuda Kumajirō? I often see shuppanjin (出版人), where the suffix jin (人, じん) attaches to the name of the occupation, and there is also hanmoto (版元).

Edit (after Naruto's request to include an image): 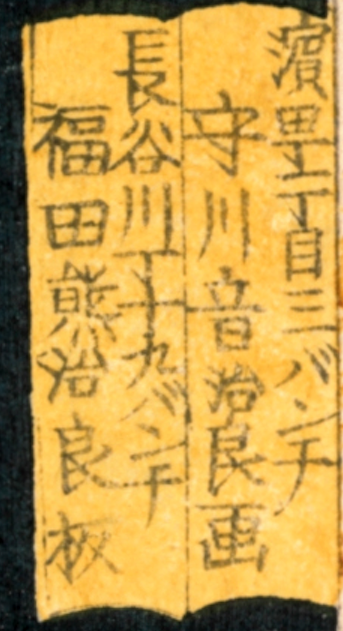 The characters in the cartouche were not all equally clear. I have increased the contrast in Photoshop. Yes, the character is 板, not 枚.

板 means "board" in modern Japanese, but 板 was used like modern 版 ("print" or "publish") in the past. As for the reading, I'm not sure, but はん and ばん seem equally reasonable to me in this context.

Not the answer you're looking for? Browse other questions tagged translation meaning kanji readings reading-comprehension or ask your own question.

9
In which terms, if any, is へつ used as an On-reading of the character 閉?
5
How is character size dealt with?
4
“Last edited by” - how to translate?
3
How shall I understand this short text?
2
Meaning of 端っこ & 近ポジ & what's that character? (picture inside)
5
Cannot recognise the kanji in a cartouche 保里尾[ ][ ][ ]晴
4
I don't understand this passage
2
Help identifying a Kanji character from image