Is kanji (especially hyogai kanji) more prevalent than usual on Twitter, or is it the opposite?

Since it is very easy to input kanji on computers or mobile devices, I've always wondered if tweets have more kanji (particularly non-jouyo kanji) than typical Japanese text, especially since kanji characters save character space. But on the other hand, tweets are very casual and slangy.

People rarely use hyogai kanji if reducing the number of characters is the only purpose. For one, usually hyogai kanji do not drastically reduce the number of characters, so it's simply not worth the effort. For one, as you have correctly guessed, using rare and obsolete kanji make your tweet look fairly odd. Lastly, the 140 character limit has not been that compelling for Japanese people: 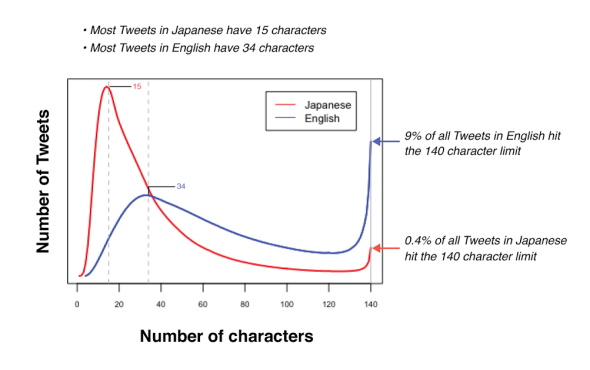 Basically, most people write text on Twitter just like they do on a blog site with no character limit. Still, people sometimes replace words that are normally written in kana with a bit difficult kanji versions ("かえって" → "却って", "むしろ" → "寧ろ", ...).

27
Distinguishing certain characters in handwriting and print (Similar-looking Kana and Kanji)
5
How many possible phonological forms could be represented by a randomly chosen single character?
3
How to find alternative writings of a kanji in electronic form?
9
Can an individual Kanji character have more than one radical?
1
To describe how to write a kanji, is it more useful to say the radical first, or the base kanji?
0
‘Nanpū’ (難風), ‘Bōrei’ (亡霊) and other matters
15
Are there any words that are longer in kanji than in hiragana?
0
Is the Japanese か more rounded than the Chinese 力?
3
What is the difference between 卓 and 台?