Although I was helped by someone, some particular lines left me and a friend confused and we haven't reached a conclusion.

The verb 許す has been used a lot, mostly in the negative 許せない because the plot is about two guys and it's about revenge, thus "I will never forgive what you did" is said a lot (another common usage for 許す is "to allow", but I believe that "to forgive" is used in this context).

Now, one of these guys says 許す in 3 ways, and I wish to know if the following sentences can be understood in two ways or just one. I'm sorry if I can't provide more context, but even just what you can understand at first glance could be of help. Here are the lines to which I provided my translation attempts:

That is the thing which I will take with me to hell.

As you can see, a lot of 許す. I tried to break down every sentence、also forgive me for writing them in that weird way above. I wanted to better illustrate just how the lines are written in the manga speech bubbles, thus a total of 5 speech bubbles when the characters talks with 許す.

OK, so now I tried to break down every line and translate quite literally:

許せない the past potential form in the negative, meaning "Can't forgive." Simple here, and here it seems to act like a noun modifier right? Thus I can say "I, who couldn't be forgiven". BUT, at the same time and I'm not sure of this, but can I interpret it as :" I, who could not forgive" (a certain act)?. Maybe something else is needed for the latter meaning and this is where I would need help with...

Isn't this a state of being? as in "I'm currently (still am) in the state of not being able to be forgiven." (I'm so sorry if this sounds so confusing!)

永遠に許せないそれを/ To me it sounds like the sentence is a modifier for それ, thus "The thing which I can never forgive"

And this is where I don't know anymore because I don't know how to interpret the causative 許される. I get the feeling that here it would work with the meaning of "to allow".

I'm truly sorry for such a long and most likely poorly explained post, I really did try to explain as much as I could. Anything would be of help!

Here is the original for context: 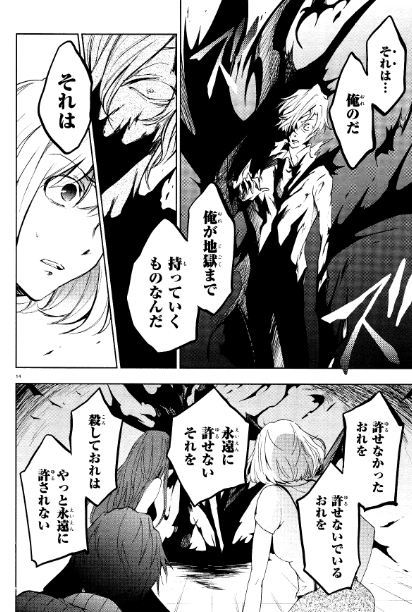 The first one can either mean "Me, who you couldn't forgive," or "me who couldn't forgive...,". Without any other sentence we wouldn't be able to tell which one it is because here the past tense of the verb makes it act also like an adjective (it qualifies the 俺).

The second one can't mean "... of being able to be forgiven" because it is not a passive sentence here but an active sentence. But you're right on the rest of the sentence, it basically means "me who can't forgive...," (me who is in the state of not being able to forgive...,).

Thanks to this one with いる that tells us that the performer of the action is actually 俺. It lets us know that the first sentence means "me who couldn't forgive...," and not the other one.

永遠に許せないそれを殺して : I will kill that, the thing which I will never be able to forgive

And this sentence again confirms the fact that the performer of the action of 許す is 俺.

As for the last 許す:

I understand it as: "I will finally not be forgiven for the eternity after I kill this thing which I can never forgive".

If there is no further context, I doubt that the 許す in 永遠に許せない would mean "to allow" because that wouldn't make much sense to me not to specify what you can't allow. Same for the last 許す in 永遠に許されない

I feel like maybe the 俺 is feeling guilty about something he did and doesn't want others to be forgiving him, so that's why he's thinking about killing "it".

Sounds wordy but knowing so little about the context that's pretty much all we can think of... You can try replacing "forgive" by "allow" to see if it makes more sense to you.

There's also another possibility: maybe the それ is replacing 俺 and the person who wrote this wants us to think that それ is something that is within 俺:

But maybe I am taking it a little too far

Not the answer you're looking for? Browse other questions tagged translation words verbs manga .