"to be impressed" in Japanese

I was googling how to say "to be impressed" in Japanese and I found a few options:

感動 seems to me to be the most commonly used (?)

The sentence I'm trying to translate is "I was impressed by your way of thinking". Would 感動 be okay in this case? The dictionary translates it as "being deeply moved emotionally" as first option, and I don't feel like I was that deeply emotionally moved, more along the lines of admiring/thinking that someone is cool.

I am a native speaker of Japanese. In order to show the differences of words given by OP, I placed them on the illustration below. 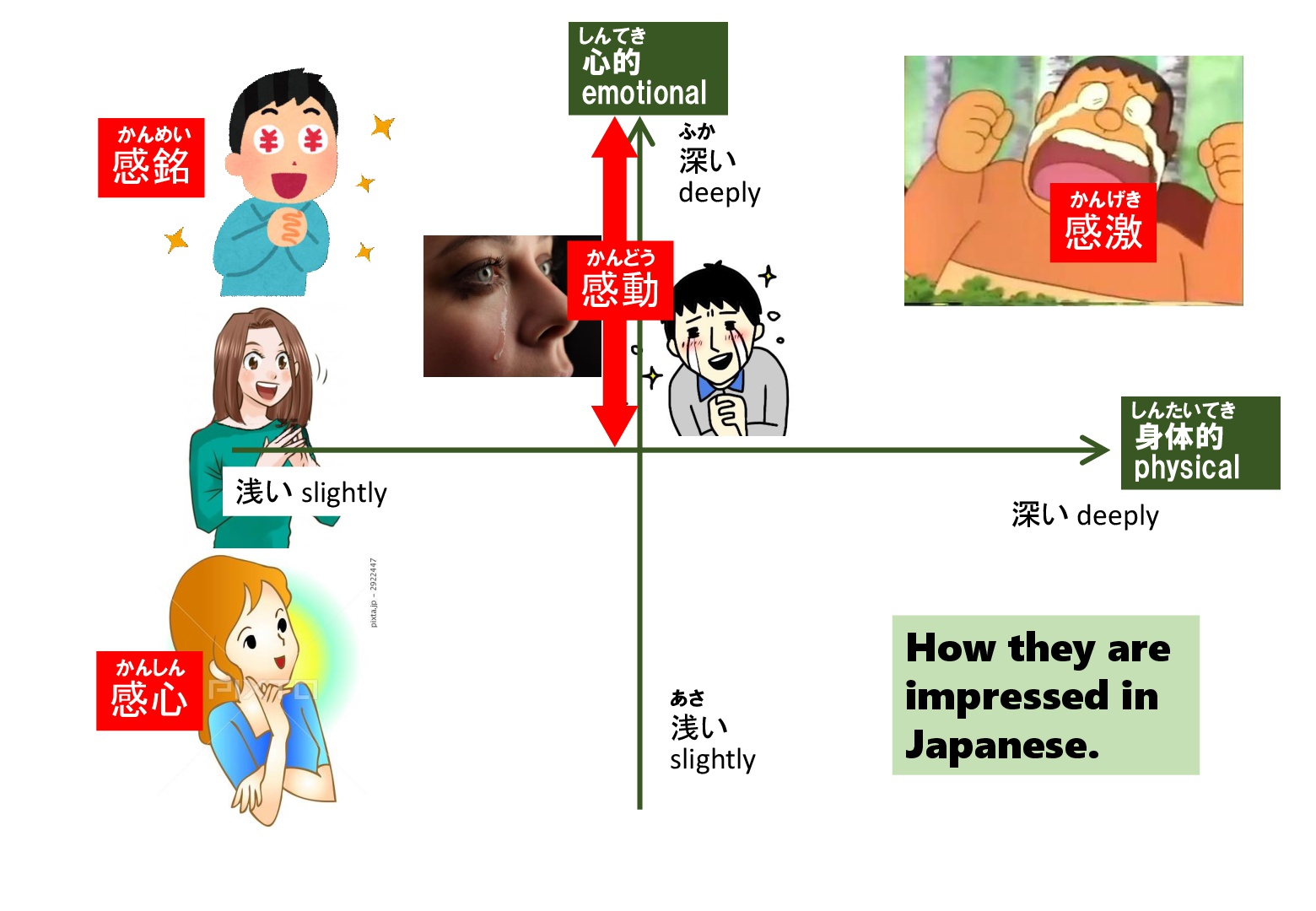 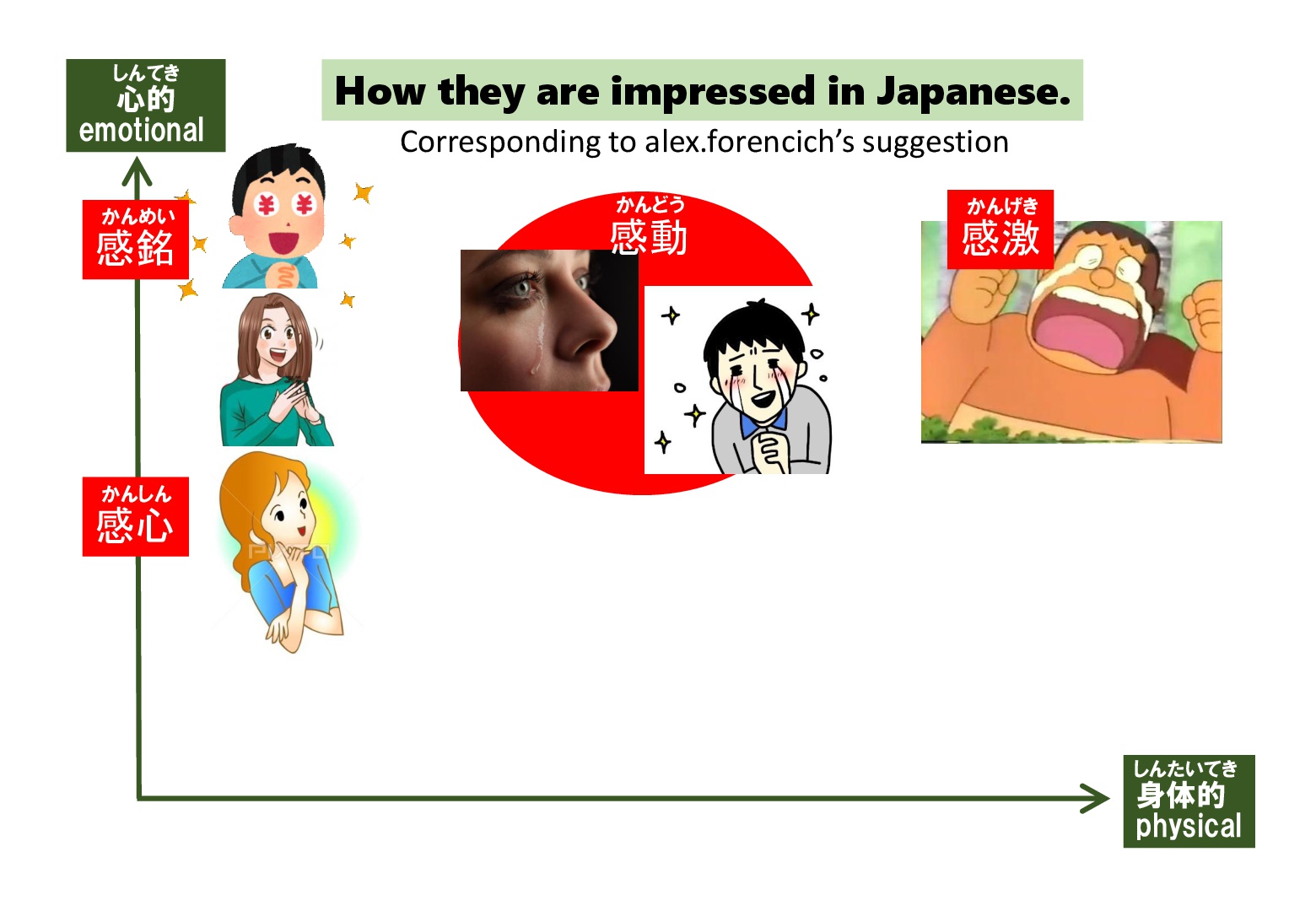 For example, what is your reaction after watching a typical tragedy like Titanic?

What is your reaction after seeing a very well-written answer on this site?

All your examples are quite good I think. Depending on the situation they can all be translated as "to be impressed with/by something" in English.

I believe this page could really help you get an idea of the differences in usage. As you can see they are all reported together as synonyms of 感動, the common meaning being the following:

That is, "being touched by a certain thing and having one's heart deeply moved by it".

Then you can see the explanation in the different nuances of all the other words. I'll paste it here:

Let's say that we got 感動 covered (as your heart being deeply moved by something).

感銘 is something even stronger (忘れられないほど深く感動し). Something so strong to the extent that you could never forget about it. Which I believe is why the character 銘 (inscription) is used.. something that will be "inscribed onto your feelings".

感激 is used when the thing you are being vehemently impressed by (that's why the use of the character 激 after all) comes out in some sort of form (actions, words, etc). It is quite emotional and used in private/personal settings.

感心 is used when your heart, rather than being shaken directly, you are being touched both emotionally and intellectually (this is quite hard to translate) by what happened (the thing that is impressing you) and your heart is moved also by a judgment of this something being great, exceptional. According to this other link, 感心 is a weaker version of the other three more easily and commonly used.

This being said, I think for your example "being impressed by your way of thinking" 感心 or 感激 could both possibly work.

PS. There's nothing like a bunch of examples of usage. You can find several here on weblio by searching for "I was impressed".

17
加える/増やす and 加わる/増える or even 増加する/殖/足, various kanji for "adding things"
21
What are slang terms for Japanese money?
15
What's the difference between 触る and 触れる?
0
What is the difference between こんにちは and もしもし?
18
Differences between それとも ・または・もしくは・あるいは
6
Is there a word that describes greenish-blue colours (of any shade)?
4
How to say "challenge" in Japanese?
2
Uses of 「四つ角」in quizlet as intersection？
3
"Safe" as an adjective?
3
"To be satisfied/content/fulfilled": Differences between 満ち足りる、心ゆく、気が済む、満足がいく?