Use of ちょうズレる in a sentence

Since the speaker is Kansai, at first I thought these were two separate sentences and that や was Kansai だ. But now I think it is just and.

The thing that mostly confuses me, and the reason I'm posting this is the last bit ちょうズレる. For one if you trust the Japanese-English dictionaries it's something like: very/really a bit off/deviant/off. Which didn't make much sense to me because putting an intensifier and a word that means little of something together doesn't make much sense (very a bit off) and ズレる entries in English dictionaries didn't seem to fit.

Now I THINK, after checking the Japanese definition, it means more something non/standard, something that stands out and deviates from norm. Using very and something deviating from norm a bit together still feels strange, but I think the speaker is probably saying that such (level of) feelings as these (self sacrifice and determination to want to save) IS REALLY out of the ordinary. And so this is my curent translation of that line.

Both her determination to protect someone and her willingness to sacrifice herself are out of the ordinary.

My question is am I right in my interpretation, and if anyone can explain to me why use ちょう and ズレる together when I'm guessing Japanese probably has other words for something being out of the ordinary without the implication of it being a BIT out of the ordinary.

Some have gone looking for the original source. Just to clarify, I haven't yet tried to parse the rest of the comment, what I'm trying to figure out does not come from that page. That page is talking about the same manga, but that's not how it was said in the original. The following is the text in the original manga panel and is identical to what I typed I think. 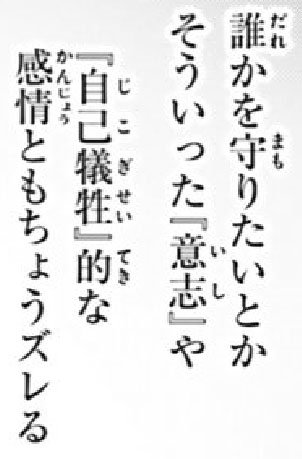 EDIT 2: Looks like this is a sentence from a Kansai-ben speaker....Then this ちょう (often also written as ちょー, ちょお) should be a kansai slangy version of ちょっと.

In general, while ズレる tends to refer to a small but significant difference, it's also perfectly fine to say すごくズレている, 大幅にズレた and so on. Please don't take that "a bit" part too literally.

ズレる without と can mean "different from the norm", but in this case there is と that marks the target of a comparison. ～とズレている is simply "to be (a little) different from ～".

The sentence roughly means "(Her behavior pattern) is also a little different from 'will to protect someone' or 'self-sacrifice'". This also aligns with the previous context. This person thinks her behavior is different from 自己犠牲, because the word 犠牲 means giving up something important to her. Her life is so unimportant to her that she does not think she is sacrificing something. In other words, she is acting somewhat like a heartless robot that does not understand the meaning of life.

Not the answer you're looking for? Browse other questions tagged translation meaning interpretation or ask your own question.