I'm reading Minna no Nihongo (Chapter 15) and it says what I wrote in the question. I would think the negative would be 知っていません。

An English translation of the link provided by Tsuyoshi Ito:

It is common knowledge that the verb 知る is an exceptional verb amongst verbs that take the ～ている form. ～ている is appended to the subject-changing verb and expresses the state after the change; its corresponding negated form is expressed as ～ていない.

But contrary to expectations, the negated form of 知っている is often not 知っていない and is 知らない instead. To the best of my knowledge, I think there are few people who have come up with a theory and explained why this is.

One of these is 『新日本文法研究』 by Susumu Kuno.

But here, an analysis is done on the type of circumstances that 知っていない is used in by taking 知らない as a basis. So, the explanation is insufficient to deal with why 知る basically yields 知らない.

It's just that when 知らない and 知っていない are described and sorted out in terms of syntactic and semantic factors, then there will be clues to solving the problem of which form it appears in.

Firstly, before considering the issue there are things that we must first confirm. And that is the issue of where 知る lies amongst the many other verbs.

Normally the following are used to show the resultant state of a movement/action:

There are 2 points here that we should be cautious about. First, not every verb appended with ている expresses a state. That is to say, 歩く is an intransitive verb but 歩いている expresses a progressive action.

We think of the verb that ている is appended to, and expressing a state, as an instance of a subject-changing verb, as opposed to the case of 歩く which is a traversal verb.

Then it seems that the problem is not with the case of Verb+てある expressing a state. But when considering the verb 着る we realise that it is a case that that particular reasoning is not applied; although there are transitive verbs used - ～ヲ着る, there are also cases for which state is expressed when ている is appended - ～ヲ着ている. (ヲ instead of を to emphasise that it's a direct object and transitive verb).

We see that while there are traversal verbs in the class of transitive verbs we also have to think of transitive verbs as including a special group of verbs that expresses change in the subject. Within the object-taking particle ヲ, its verb's meaning has a traversal aspect. And, behaving in the same manner as 着る, it also possesses a subject-changing aspect because it changes its own state as well.

That being the case, although the verb 知る is transitively used in the manner of ～ヲ知る, it can be said to be in the same verb group as 着る because it yields the form 知っている.

Regarding this fact, I think it is appropriate to think that it is due to the "semantic features" of the verb 知る and the image(= the way we perceive) that we have of 知る.

Why it is that 知らない is a basic form:

Regard the displayed mental activity as the filling in of information when visualising the verb 知る:

For the illustration to show it, the verb 知る here is transitive. The mental activity is the filling in of information(denoted by ◯). So the sequence of events are as such:

(X) 知る: Filling in of information
(Y) 知った: Information has been filled
(Z) 知っている: What's left as a result(of X and Y)

By comparing the visualisation of 知らない with the above diagram, we can think of two cases represented as ア and イ as follows:

For subject-changing verbs, normally ア is connected with イ to have ～ていない expressed. But for 知る, it seems that the portion connecting ア with イ (denoted by =>) has been detached and individually dealt with instead.

So what does this mean? We will see what happens when we compare and consider 来る.
Using 知る's diagram, take people to be information and rooms as minds: 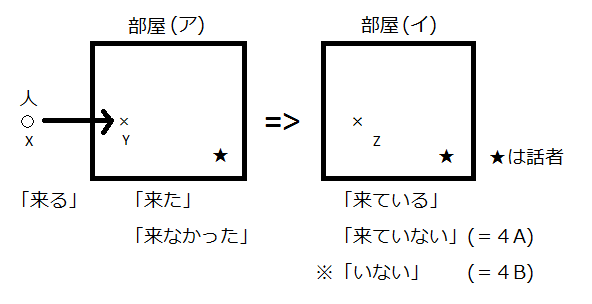 Suppose a friend enters a room you are in and asks:

What's important here is that response (4B) has two sides. One perspective is that by saying ここにいない, it means 来ていない. While it states the state of (イ), it does so by taking the situation of (ア) as a premise.

Another perspective is that we can say 山田 is "いない" even though we do not know the state of 山田's coming(if he will/has come) simply because we were present right from the beginning. That is to say that (4B) does not negate 来た; which as a result means ここにいる. In fact, (4B) negates "existence". As for what it means to negate "existence", to put it in another way is to say that this room's "property" is that of "a place of which 山田 is non-existent".

It is a strange way to put it but the point is that it is not the aspect of a ～た→～ている transition.

Answer 3 given to this question seems interesting. You might want to take a look at the original: 久野すすむ (1983) 新日本文法研究.

The original Q and A site (link provided by Tsuyoshi Ito. Switch to EUC-JP to display it correctly.)

Not the answer you're looking for? Browse other questions tagged verbs conjugations or ask your own question.

4
Why is しっていません a mistake ?
2
why is "know" expressed as 知っています, and what does 知ります really mean?
0
Why is "not knowing" 知らない and not e.g. 知っていない?
4
Still confused with tenses
3
Correct negative form of punctual verbs
4
What is 在り方 used for?
4
知りませんでした or 知っていませんでした?
1
Meaning of 君の知らない物語
1
The use of "ている"

8
What's the meaning of ず in 通ず? (Not a negative)
5
When did 全然 get restricted to the negative?
1
negative verb confusion
1
かきます（to write) when used with the particle に
4
Conjugate る-ending verbs into negative form
2
Is the negative potential of 書く used in this sentence and what is its meaning?
1
Concept of Negative Form of Auxiliary Verbs
1
Understanding the negative potential form