Is 寝る a stative or active verb?

Looking at past questions I am still confused about the answers given:

昨日も全然寝てない。
Yesterday I didn't sleep at all.

昨日も全然寝てなかった。
Yesterday I didn't sleep at all.

I want to confirm my understanding of active vs stative verbs:

Because of that I also cant understand why 昨日も全然寝てない。 is not 昨日も全然寝てなかった。If it was a stative verb.

If 寝る is an active verb in this scenario it also wouldn't make sense at all because I would translate it as "yesterday I am not sleeping".

This post may be related but I only see examples where it is used as an answer to a question.

When you talk about something in the past, the difference between 寝た and 寝ている can be sometimes blurry, and they are often interchangeable. For instance, if someone in front of you looks sleepy, you can say both "昨日あまり寝てないの?" and "昨日あまり寝なかったの?". But 寝ている tends to be used in relation to the current situation, so 寝てないの may be chosen more often in this case. Likewise, before a boring but important event, you would usually choose "昨日ちゃんと寝てる?" rather than "昨日ちゃんと寝た?" See also: Why is a verb in the past (た形) contradicted with ～ていない?

Imperative 寝て(い)ろ always has a progressive meaning, because making a command about something in the past does not make sense (You cannot say "Have slept!" in English, either.)

Past perfect 寝て(い)なかった ("had slept") is relatively uncommon, but it's used when you talk about it in relation to another event in the past.

EDIT: Here is the basic difference between present and past perfective aspect. The eye icon indicates what you are describing. Past perfective aspect describes a continuation of state until some point of interest in the past; its current status is not important. 寝ていた works just like this, too, but it can also mean progressive "was sleeping". 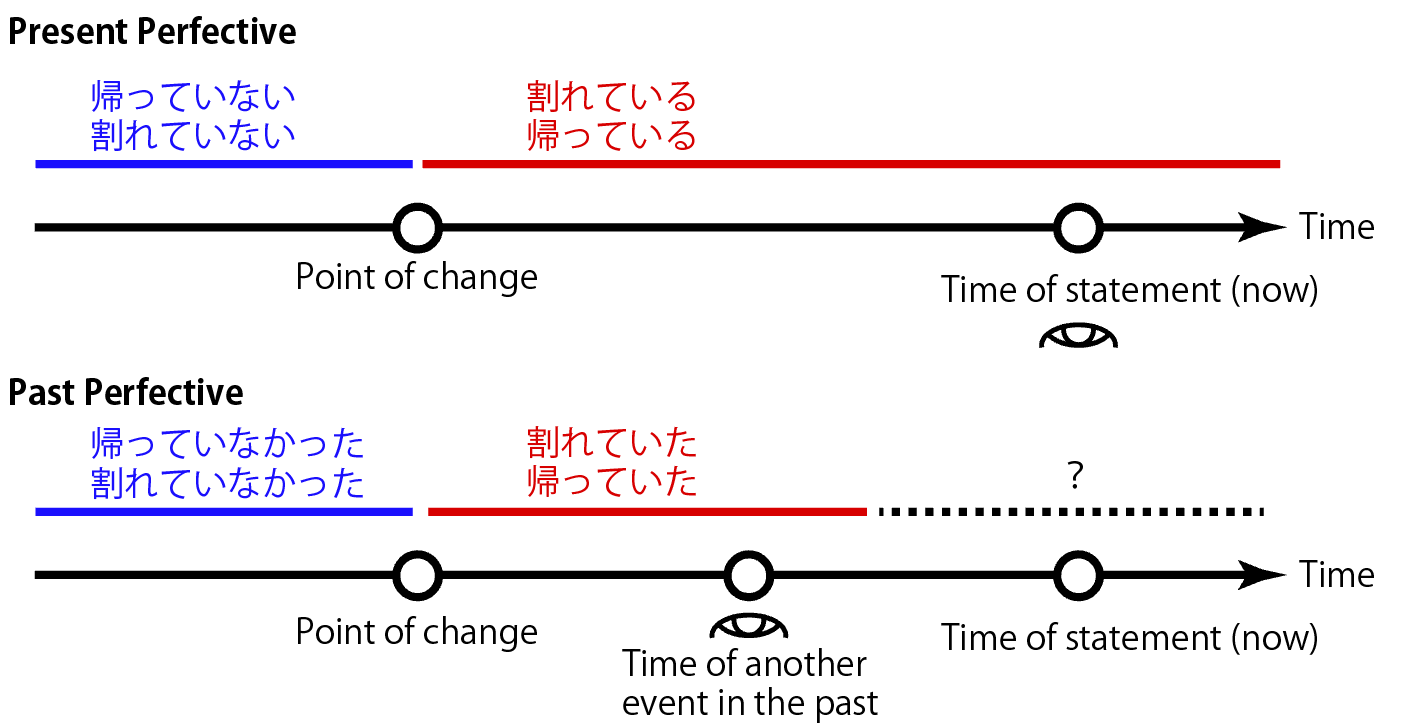 I'll answer your question because the difference between the two expressions is obvious.

Assuming that the subject is "he", 帰っていない means "He has not come home and he is not at home now".

Note: added the following three lines
Linguistically, 帰っていなかった is used as an expression in which the tense of 帰っていない is shifted one step to the past, but sometimes it is used with the nuance that the state of 帰っていなかった was contrary to the expectation. In this case it is used as follows:
帰っていなかった implies that "帰っていると思ったが帰っていなかった I expected that he had come home but he hadn't. ".

By the way, we usually say 帰ってない instead of 帰っていない.

Not the answer you're looking for? Browse other questions tagged grammar nuances verbs .

0
食べていました meaning "Have eaten" or "Just ate"
78
When is Vている the continuation of action and when is it the continuation of state?
16
Why is a verb in the past (た形) contradicted with ～ていない?
9
Meaning of 寝てない
1
Usage and meaning : 寝ろ vs 寝てろ?
4
Confused with verb form ( I am eating vs I was eating, vs I haven’t eaten (yet))
3
What conjugation of 送る is used in 返事をしたつもりだったが、送れていなかった
2
Question about ている ていた for explaining state for something
2
Understanding てきている and the difference between てきた and てきている
2
になりました vs になっています
See more linked questions

5
Examples of when passive form in English takes active/non passive form in Japanese
5
Do Japanese stative verbs have the inchoative aspect?
9
Meaning of 寝てない
1
Usage and meaning : 寝ろ vs 寝てろ?
2
How can the ~たい form of a verb be modified for past/present or positive/negative use?
3
How to interpret intransitives in non-past tense
1
Usage of ている in Punctual Verbs in Japanese and the Concept of Present Perfect in English
2
Why usage of た and not ている in the following usage
2
Does the legality/idiomaticness of verb+のの+方 depend on the verb?