However, I came across a usage which, at least at first, doesn't seem to conform to that understanding. In my JLPT textbook, there is this graph showing the number of people in the farming industry (ignore the red line, it's just a pen mark): 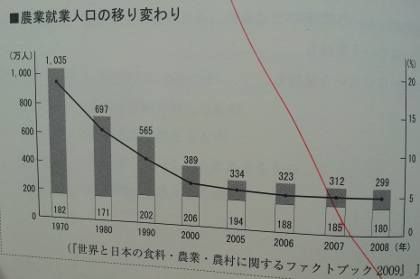 One question asked which of four sentences best describes the change from the beginning to the end of the graph. This is the correct answer:

Instead, after checking the answers and seeing that this sentence is indeed the correct description, I'm now guessing the sentence is supposed to mean "There were over 10 million people, but it was cut down to 3 million."

However, I can't see how in this sentence 切{き}った means "cut down to", and not "cut from".

What is it that I am not seeing in this sentence, or what am I not understanding about 切{き}る?

切るdoes have many figurative meanings, however.

One is "fall below" for prices, times, numbers etc.

Another is to "lay off, fire". When used in this sense, the meaning might seem close to "to reduce in number", so that could be one cause for the confusion.

Don't think about "cut". Stop thinking about "cut from" or "cut down to" or anything else. At a certain point, thinking in English about Japanese becomes more obstructive than anything else. Just think in Japanese.

Well, OK, the example from your question (300万まん人にんを切きった。) isn't the most intuitive. Let's go with another example. I first encountered this meaning in the context of a race, and I think that's a great way to understand this meaning, so we'll go with that (lifting Chocolate's example from another comment...). Again, only think in Japanese.

...Once you've got a good grasp on this sense of 切る in one setting, you can easily carry that over to other settings.

I hope that helps at all. =X (If I made mistakes, by all means point them out, fix them!)

11
Does 「えらい 」also mean "terrible"?
22
Does Vて+いる always mean an action already completed?
1
Can't parse sentence with 「へったくれもない」
2
Use of は with 自分 in a subordinate clause
1
How is this sentence interpreted?
3
What does 気が遠くなるほど mean?
1
What does it mean
0
what does 見てできる mean?
1
What is the most natural way to tell others that I learned something from someone else?
1
Implicit negation in conditional phrases with なら