How does one say 'tried as an adult' in Japanese?

My best guess would be 「成人・成年として裁判にかける」, but neither seems to return many results. Incidentally, what's the minimum age to be tried as an adult in Japan?

I think the minimum age to be tried as an adult is 14 years old...

We just say (刑事)裁判にかける if the suspect is an adult who is over twenty.

As opposed to adults, juvenile suspects who are between age of nineteen and roughly twelve will take 少年審判 at 家庭裁判所 (Family court) first, where the judge decide what punishment will be conducive to suspects’ reformation. 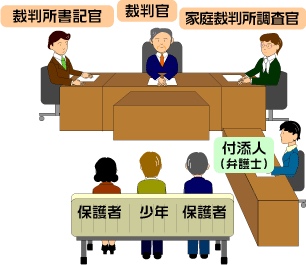 As the image shows, there is no prosecutor at 少年審判 so the suspects won’t be ‘tried as an adult’ unless the judge decides to remand them. According to the juvenile law, suspects under 13 shall not be prosecuted.

The press often use 家裁送致する(される) for the juvenile suspects and 児童相談所に通告 for pupils.

As for your second question this article may be interesting: https://www.japantimes.co.jp/opinion/2015/05/28/editorials/juvenile-crime-and-punishment/#.WiymVGJcWEc