A couple of questions, including the use of the word ‘nanpū’ 難風. 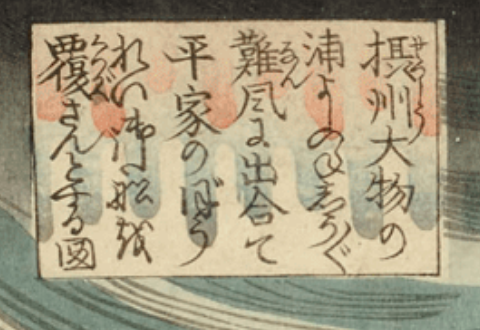 The ‘mifune’ (?) and the ‘wo’ (を) are difficult to read, but I think the characters 御船 are correct in making sense of a “capsized” (‘kutsugae’, 覆) boat. In a recent post, @droooze gave a good web-link (http://www.shufazidian.com) so I have looked there for clarification, on top of my usual references:

There appear to be many ways of writing/describing a storm or a wind: a storm or tempest is usually represented by the character ‘arashi’ (嵐). In terms of ‘nanpū’ (難風), the character (難) can be read as “difficult,” “trouble,” “hardship,” or an “accident,” “calamity,” “disaster,” “danger,” and (風) “wind.” I trust I am not incorrect in my observations, but I have found ‘fūha’ (風波) for rough seas, literally “wind and waves”; ‘bōfū’ (暴風), literally a “violent” or “forceful wind”; ‘hayate’ (疾風), a “fast wind” or “gale” that might be thought of as a very sudden bōfū; ‘akufū’ (悪風), an “evil wind” or “bad wind”; and ‘reppū’ (烈風), a “strong wind.” Do modern Japanese speakers use these terms interchangeably, as general synonyms for a storm, or is one always mindful of the quality of the storm/wind and the way that words are used culturally, historically, semantically? That is, does it debase language and meaning if it is simply translated as a “storm”, rather than a “difficult,” “troublesome,” or “dangerous” wind (and in the case of those latter three, or any other, I would ask which would be a more definitive translation of ‘nanpū’?).

Why do I ask this? Because I often think about the importance of the poetics and ‘spirit’ of the words: it would, for instance, be inappropriate if “Blow, ill wind, blow away, Let me rest today, You're blowin' me no good” was changed to “Blow storm, blow away, Let me rest today” (Ted Koehler’s lyrics put to Harold Arlen’s 1934 musical composition). There are many other lyrics or prose with references to a particular kind of wind (ill wind, lonely wind, whispering wind, wayward wind, restless wind, summer wind, soul wind, north wind, west wind, etc.) and many synonyms for wind or storm (squall, hurricane, tempest, gale, zephyr, gust, strong breeze, breeze) that have subtle or significant differences in meaning and intent that—I hope—would be respected when translated into another language.

The title also references ‘bōrei’. This is another case in point. Many museums will translate this and related terms purely as ghost, but is this solution in tune with the vernacular understanding of ‘bōrei’ (亡霊; 亡 “dead” or “departed”; 霊, 靈, rei, “soul/spirit”, also seen as 亡灵), a ‘shiryō’ (死霊, a “dead spirit”), a ‘yūrei’ (幽霊; 幽, yū, "faint" and 霊, rei, "soul/spirit"), or an ‘onryō’ (怨霊)—literally a "vengeful spirit" or "wrathful spirit”—a yūrei believed to be “capable of causing harm in the world of the living” and “causing natural disasters to exact vengeance.” I'm interested in other's perspectives, especially in the context of the use of the word in literary works and artistic titles.

As for 難風{なんぷう}, I think you are bit overanalyzing the synonym. It should simply mean “difficult wind “ like you feel it hard to control something such as balance and hard to go forward when you are riding a bicycle, since the wind is too strong.

I guess 難風{なんぷう} itself is not so common word though, I often feel 難しい風 in a very windy day. Probably it’s hard for you to catch a ball falling down from up the sky when it was in a bit of turbulence like 難風{なんぷう}.

Yeah, I think Japanese people are mindful about the difference between 暴風{ぼうふう}:tempest , storm, 疾風{しっぷう}: quick wind, 爆風{ばくふう}: blast, 悪風{あくふう}: evil wind, 烈風{れっぷう} sharp wind as if cutting your face and so on.

Not the answer you're looking for? Browse other questions tagged translation meaning kanji obsolete-kana or ask your own question.

2
Name/Title at the end of a sentence. Vocative case?
5
Are both spellings for ふけ (fuke) "dandruff" ateji? If not what's actually going on?
4
How do I make sense of the calligraphic characters for 六波羅坂東寺会戦?
0
のもさーこう, イロイロ and other considerations
1
だって, なんだって and some other interpretation questions
0
San, sama and other honorifics in translated literature
12
Meaning of 然 in conjunctions and other grammatical words
7
Questions on an 1840's text: Battle at Yamaki Palace 治承四年八月中句右兵衞佐頼朝公
1
what does と and other kanjis stand for in this sentence?
1
Usage of other word forms