How is the subject of this subclause made clear?

The sentence in question: このほか、体につけると普通の３０％ぐらいの力で重い物を持つことができる機械もあります。

=> "In addition, there were also machines which could lift/hold heavy things with about 30% of the regular strength, when you wear them on your body."

My main issue with this sentence is that my translation ACTUALLY wants to say "robots which can MAKE (it so that) you use only 30% of the strength you usually need...". However, "to make X to Y" and "strength (case X) compared to strength (default)" are components which aren't represented by anything I could identify as a suitable equivalent in the japanese original sentence. Well, at least 普通の could hint at an implicit reference to the default case, but I'm not sure about it.

The main issue still stays that the full block 体につけると普通の３０％ぐらいの力で重い物を持つことができる seems to modify 機械.But then, the reference point of ３０％ぐらいの力で seems to be the machine itself, at least from a syntactical perspective. And this wouldn't make much sense, as a machine can't lift something with only 30% of the power required to lift it. It can help YOU to use only 30% of your strength, because the machine takes on the other 70%. But it can't meddle with physics itself, can it?^^ :D Since 体につける definitely must refer to the person wearing the machine, there is indeed something hinting that the subject of 持つことができる is a person. But there isn't much besides that, and I still wonder wether there any other explicit syntactical elements showing us that the subject of 持つことができる is a person, and not the machine to which the full block 体につけると普通の３０％ぐらいの力で重い物を持つことができる is attributed.

Japanese relative clauses lack relative pronouns such as "which", "that", etc. So before you get fully used to them, they can look fairly ambiguous. What you're seeing here is an "adverbial head" type relative clause, which is discussed here.

Here are some simpler examples. Haven't you seen similar expressions?

As you can see, in each example, the subject of the relative clause is omitted ("you", "I", "he", "people" or whatever depending on the context). The modified noun at the end works neither as the subject nor the object of the relative clause; instead, it plays an adverbial role (レストランで寿司が楽しめる, 部屋からビーチが見える, ペンで字を書く). The interpretations marked with × are "technically" possible, but we know they are wrong because we have common sense.

Of course this sentence is referring to a so-called powered exoskeleton.

The syntax seems explained in the comment. Other than syntax, I think a machine is this kind of thing. 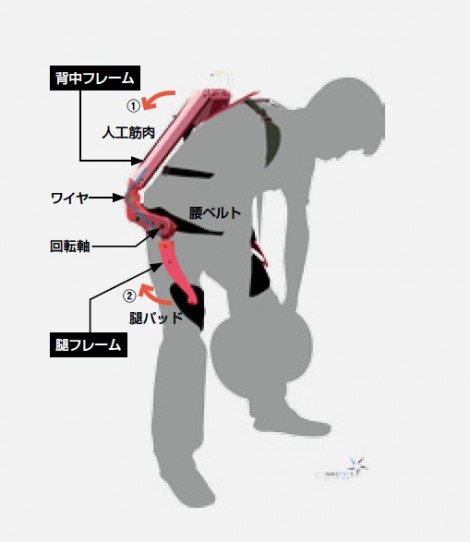 kimi Tanaka, cool! I'll elevate my comment to an answer.

The subject of the subclause is absent. It's not the machine; it's the user of the machine or "you." To keep the English as close to the Japanese as possible, it's an "attach-it-to-your-body-and-you-can-lift-heavy-things-with-3‌​0%-of-your-usual-str‌​ength machine."

7
相手には when speaking of “two third persons”
6
Does 考えさせられる小説 make sense?
12
Relative clauses types and confusion
4
Relative Clause Ambiguous
3
Using prepositions in relative clauses?
3
Question about 変な奴だって思う子がいたら
2
How to say “the one I sent the letter to”
1
What machine are they talking about here?
0
How to make sense of 呪縛から解放されるウソという名の魔法
1
Meaning of お世話になる vis a vis place of work or place where someone is being trained
See more linked questions