Is this a contraction of something? How does it differ from something like 寝ると or 寝てると? 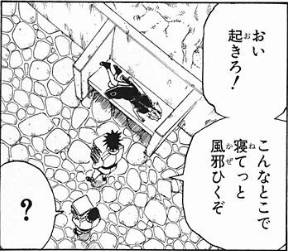 This is obviously a contraction of 寝てると. Not sure if this pertains to certain dialects/age groups etc. though. Haven't heard this one myself in real life.

The ーと in this sentence relates two parts as a consequence, but also gives an admonishment: I.e. this character is effectively saying: "You shouldn't sleep in such a place or you will catch a cold, you know!".

(Contrast this with ーば (as in こんなとこで寝れば...）which would just states the fact/opinion plainly: "if you sleep in such a place, you will catch a cold.")

The "tto" contraction used here is emphatic, or possibly male speech. Or both. It strengthens the statement, as if the character is saying, "you really shouldn't sleep here."

It is a phonetic feature of Japanese that changes toward stopped consonants are emphatic. For instance consider：

Not the answer you're looking for? Browse other questions tagged て-form contractions particle-と or ask your own question.

13
Where does the suffix 〜がる come from?
2
「行くときゃ誰とゆく」— what's this きゃ and the とs?
1
Meaning of verb followed by ちゃ
1
Using て-form to indicate purpose
4
Verb te form + くれて
0
How to interpret ないって
3
サインもらっとけとでも言う - Breaking this phrase down
2
Why is とは used over に in this Sentence?
3
What is せんな a contraction of?