Question about use of セリフ in Yotsuba vol 1

I was struggling with this part of Yotsuba vol1 and couldn't find any other questions on it so I thought I would post here to make sure I am understanding this right.

And is a response from Jumbo after Yotsuba comments on how much he has grown since she last saw him.

Just from looking at an English version of the comic, I know that he is saying something long the lines of:

Hah. Where did you remember that phrase from?

I know どこ means where, and from Jisho it looks like おぼえた comes from 覚える (to remember).

The last part, セリフ has a few translations on Jisho:

of which option 2 seems to make the most sense.

Does this all seem correct, and if so is there any reason why the last word is written in katakana? 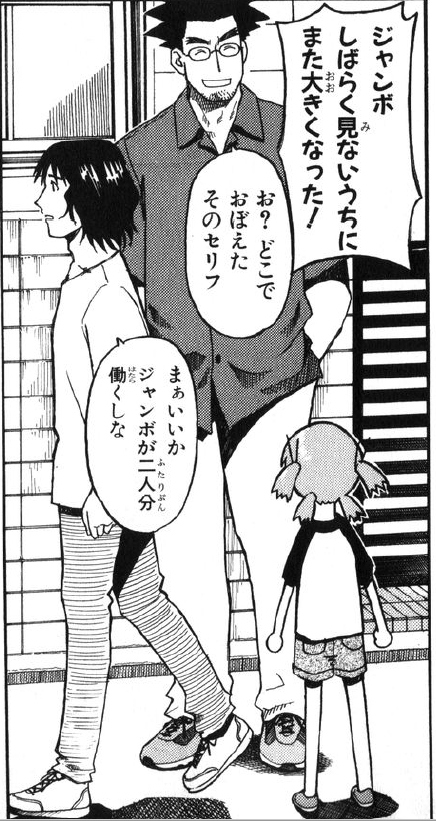 Does this all seem correct

Yes, it not only seems, it is correct.

if so is there any reason why the last word is written in katakana?

No. No other reason except for: "usually written using kana".

Most likely because one or more predominant dictionaries of the Japanese language included that form as a referential, or some style guide defined this form as preferred.

セリフ is usually written in katakana because the kanji 台詞 is a uncommon reading and putting it in katakana makes it easier to read, like they do with vegetables and the sort.

As to why katakana over hiragana? Again, it's easier to read. Note the lines below.

One thing kanji and katakana do in Japanese is help make reading easier. Because we usually use hiragana for particles and copula, putting it in hiragana as well would make it harder to parse = read.

Also, in fictional writing, writing things that usually are kanji or katakana in hiragana gives the effect of sounding like a kid.

is there any reason why the last word is written in katakana?

Yes, there is a reason. Writing it in katakana is most easy to recognize the word in the phrase for the average people who read this comic book.

There are four ways to write the phrase in the comic as follows.

Knowing that kana is a generic term for hiragana and katakana, I'll explain the following things.
Jisho's explanation of "Usually written using kana alone" means that you are better not to use kanji in writing "serifu". However, it does not mean that "serifu" should be written in katakana.
Therefore, it is incorrect to make a decision that "serifu" was written in katakana based on the explanation of the dictionary.

In written Japanese, most highly educated people know the meaning of 台詞 and how to read it, but if you use 台詞 it is safe to put ふりがな for it like 台詞｛せりふ｝ or 台詞（せりふ）, because average people don't know how to read it. But ふりがな for 漢字 implies that the writer thinks the reader is uneducated person. In this difficult situation, writers including the writer of this comic book would select セリフ rather than せりふ, because all ひらがな phrase is difficult to make each word be recognized clearly .

Although it may seem strange, in Japanese language that has various ways of writing, caretaking Japanese people would solve this kind of problem each time with thinking this kind of consideration when they write someting with considering the level of the readers.

Not the answer you're looking for? Browse other questions tagged words kana or ask your own question.

56
Why are katakana preferred over hiragana or kanji sometimes?