I have a doubt about this sentence that i found in a book : 太古から続く闇が降り落ちるよりな部屋が現れる

I am reading a japanese book in order to learn kanji and i found this sentence :

In case if you are wondering about context, a character has just opened a door in a dark basement. As far as i understood he discovered a room and darkness dissapear or something like that. My problem is first part of sentence : 太古から続く闇が降り落ちる... (it says something about darkness falling down but what is confunsing me is first part "since ancient times 太古から" because it does not makes sense in that context)

If someone can help me to understand, that would be nice :D

Even if "よりな" is a typo of "ような", the following sentence does not make sense, because the room must appear bright after opening the door in a dark basement.

I don't know what kind of a typo is there, but the context must be that a room appears after the darkness is cleared, where the darkness was very dark which lasted for a long time from ancient times.

Then I boldly interpreted the original sentence before a typo as follows.

I think (3) is more natural as Japanese than (2) with almost the same meaning. 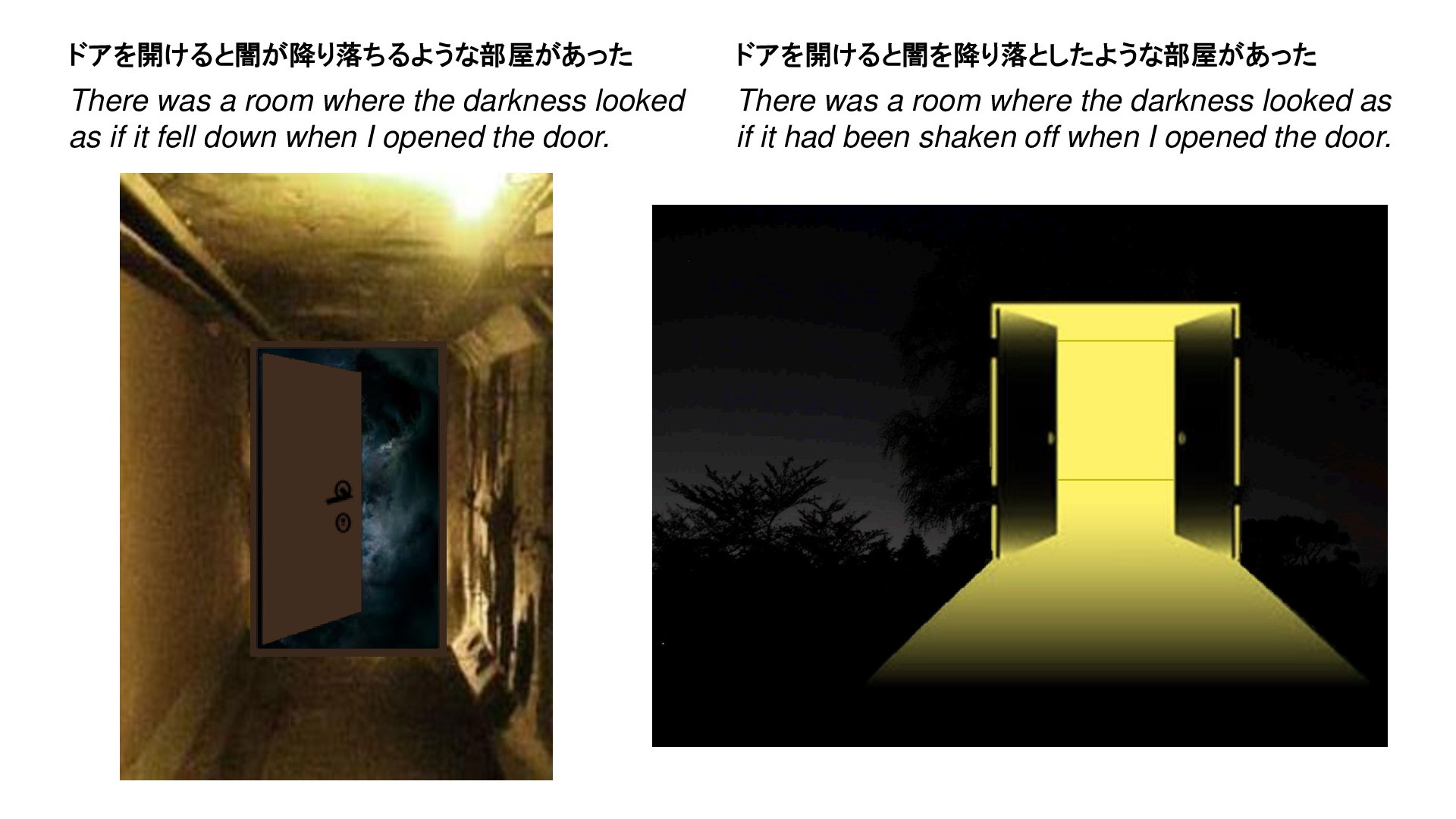 Why the author used the expression "太古から続く闇 the darkness that has been continuing since ancient times" ?

The author, I think, wanted to express that it was not a darkness of an ordinary darkness, for example the darkness for half a day when it becomes after the sunset, but it was a darkness that had lasted for tens or hundreds of thousands of years. To put it another way, it was a darkness that did not turn bright easily. I think the relationship between "darkness" and "since ancient times" is a kind of a metaphorical effect that the author intended.

In general, the longer the time to put the material to be dyed in dyeing solution is, the more difficult the dyed dye will disappear.

So as in the case of dyeing, I think that the author thought figuratively that the darkness did not become brighter easily when the darkness lasted for a long time.
There is no example of "降り落ちる falling down" even if I looked it up in the corpus named "少納言｛しょうなごん｝" that many Japanese examples are stored.

In fact, judging from my experience, I understand the meaning of "～が降り落ちる" as Japanese, but I think it is not used much. There is an expression "～が降り注{そそ}ぐ" which is more commonly used having somewhat the same meaning as "～が降り落ちる". By the way, "～が降り注ぐ" has 32 sentence examples in the corpus.

Examining the Internet, I could find examples of "雪{ゆき}が降り落ちる Snow falls", "雨{あめ}が降り落ちる It rains" and "木{こ}の葉｛は｝が降り落ちる Tree leaves fall." As you know "snow", "tree leaves" and "rain" are all small pieces, not masses. So, it is quite difficult to understand the concept of "闇 darkness" as a piece or a part of something like the leaves, raindrops or snowflakes.

As a result of the above examination, if the error-free sentence which the questioner cited is "太古から続く闇が降り落ちるよりな部屋が現れる", and the context or situation understood is like "A character has just opened a door in a dark basement and discovered a room and darkness disappeared or something like that", it is reasonable to interpret the sentence as follows.

As discussed in the comments above, 「落{お}ちるよりな」 would make no sense. It should be 「落ちるような」, which makes perfect sense.

「～～ような」 forms a simile, which is why the preceding phrase can be the most unrealistic.

"A room where it looks like a darkness continuing from ancient times falls down comes into sight."

Not the answer you're looking for? Browse other questions tagged translation expressions or ask your own question.

11
安らぎの人 translation into English
2
What does 緊張感{きんちょうかん} in this sentence mean?
2
Translation difficulties and the meaning of 着くように
5
What does 望むところだ mean?
2
A little help with these sentences
5
What's the function of に here?
1
How is 「外野が無理に殻をこじ開けて」 related to 「自身の闇」 in this sentence?
2
Could I get help with this translation please?
3
A little help with a sentence and also the meaning of だと
1
光の差さぬ暗い影 vaguely understanding this line