What are these Okinawan kana-like characters?

I was taking a look at Wikipedia's page on the Ryukyuan languages when I came across the following picture: 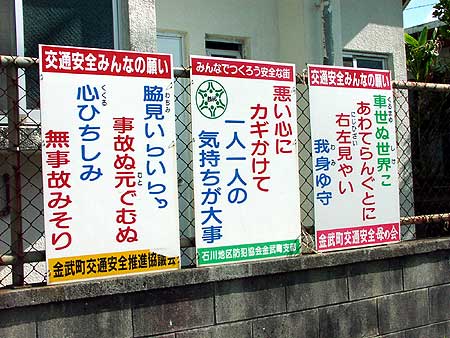 The billboard on the left features three kana-like characters that I have never seen before, and that are not part of the gojuuon system. Interestingly, they are not listed on Wikipedia's page for Okinawan scripts either, despite this page detailing four different transcription systems (Conventional, Council, Ryukyu University, and New Okinawan).

Given that the caption below this picture says that it was taken in the town of Kin, I presume that the sign is written in a Kunigami language variety? However, I can't seem to find any references that describe a unique kana system for this area. Would anyone be able to provide any references that list the readings for these characters (and any others that may be in use for this language variety)? Thanks!

In this webpage 沖縄の言葉で書かれた注意書きがわからなすぎる, there is the following picture: 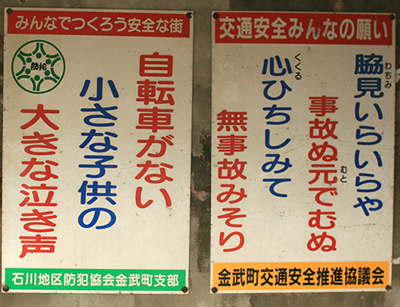 Comparing this one with the one in your post makes me think that maybe it is just your picture is missing some paint.

Not the answer you're looking for? Browse other questions tagged orthography kana ryukyuan-languages or ask your own question.

27
Distinguishing certain characters in handwriting and print (Similar-looking Kana and Kanji)
11
In Okinawan, what is the ン in ウチナーンチュ?
7
What phonetic shorthands (like 〼, 〆) are there in Japanese?
2
Is there a standard way to clearly differentiate similar handwritten (kana) characters?
5
What are the right shapes of kana?
1
What are the small kana words put above kanji called?
1
What are the kana between kanji called?
8
Academic/historic attempts to create an alternative writing system similar to Hangul?