「開放禁止」 Can I open the door?

I found a sign on a door that says

The door leads to the staircase outside of the building.
Here's what doesn't quite make sense to me: unless the case of emergency, am I prohibited from:

I'm kind of scared to go through that door, to be honest.

This is technically ambiguous because 開放 means both 開け放つ and 開けっ放しにする, but I personally feel this 開放 just means "to open" rather than "to leave open." Thus the sign should mean "emergency exit only."

But the biggest reason is, "非常時以外はすぐドアを閉めろ" makes very little sense as a sign, from the security standpoint. I have seen many doors in Japan that are normally locked but can be manually unlocked in case of emergency. The sign OP saw is technically ambiguous, but I assume it refers to the same thing as this. 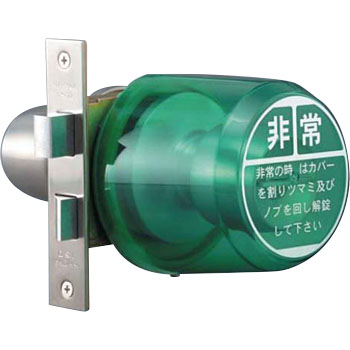 It's a set phrase, meaning: EMERGENCY EXIT ONLY.

"Do not open (this door) except in emergencies."

In my opinion, there is no doubt about the meaning among the native Japanese people because it's a set phrase of "signs." You can think of the interpretation of the Japanese phrase linguistically, but it's non sense in practical life in Japan. You should learn the meaning of traffic signs and this kind of signs just mechanically.

It is another thing that Japanese people obey/follow these signs. For example:

You may see there are cars parking in the area, although it is not in an emergency.

Only for the handicapped

You may see non handicapped people may park in the place with the sign.

You may see cars stopping and parking in that area.

EDIT: I stand corrected. See other answers for details.

TL;DR - It means the latter. However, it looks like some Japanese confuse the meaning.

I personally was confused with this phrase. This is because "開放" was accompanied with "厳禁" (strictly prohibited.) This raised a feeling that opening it would get me in trouble.

One of the results in my googling shows me that "開放厳禁" indeed means both. However, from the point of the meaning of each word, it should not mean the former.

I looked for "開放" in dictionaries and found that "開放" means "to leave something open" (It does not mean "to open something." The entry is found in デジタル大辞泉.) Hence the meaning is the latter - "Strictly don't leave it open unless in the case of emergency."

I did a further search on other Q&A sites and found that if the person who put the sign really didn't want someone to open that door, it should've said "締切," which means "Keep it (like windows or doors) shut," or "立ち入り禁止."

P.S. I went through the door after that because it didn't have any security measure (something like in naruto's answer.) I asked this because I saw that door sometimes used by somebody who doesn't seem to be a worker there.