How to say f*** yeah in Japanese

I often get asked about swear words by Japanese people. As I sometimes watch Netflix, I can see how other translators approach these phrases and get helpful hints.

Specifically, I'm curious about the phrase 'f*** yeah', expressing strong agreement or satisfaction. Maybe I would try ii ne! Or just tanoshimi! Or maybe yabai! But these translations are probably inadequate.

Can anyone think of a better rendering?

Seeing as Japanese doesn't really have anything analogous to English 'curse' words, you won't find anything that really feels the same. That particular phrase has a sort of punchiness to it that nothing in Japanese really renders well. It's in some ways more of a cultural thing than a linguistic one - expressing that particular emotion looks different when Japanese people do it versus people from the Anglosphere. If you're looking to describe it to Japanese people, you might want to make use of some copious body language, and a description like 'it's like this, but more intense (and also censorable)'.

There are ways to translate it, though, modulo the above situation. It depends on exactly what's being commented on, though. (To note, these are based off of stereotypical Toukyou-area speech, and these examples could sound very different to speakers from elsewhere. Other dialects likely would phrase these rather differently. Thanks @Will for pointing this out.)

Celebrating an accomplishment - おおー！やったぜー！ and similar (possibly やるじゃねーか！ for someone else's accomplishment); or some variant of よっしゃー！ (thank you @Kurausukun)

'Yes, indeed, this is the case' - 違いねーぞ／その通りだぜ and similar

Here's a good article, although in Japanese: Japanese Questioning How To Say F*** Yeah!

This can give off the same feeling, but still does not directly translate.

Apologies if this should be a comment (don't think I can include photos in comments so putting as an answer), but "Saikou" would seem to fit, if this sign I photographed at a cat cafe in Harajuku is anything to go by (in katakana, interestingly): 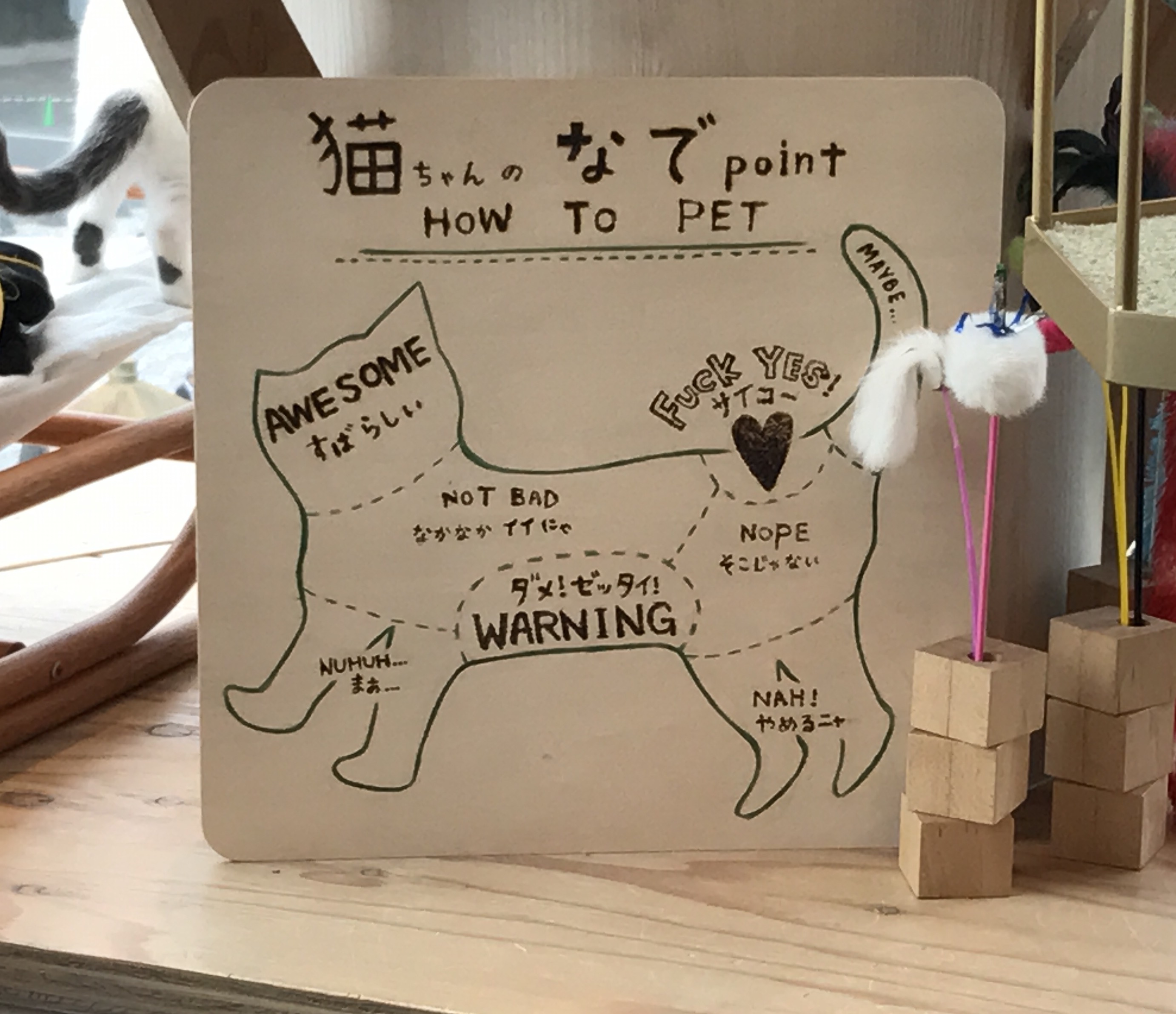 Noting that I'm in central Tokyo, the only thing that sounds close to me is a super-dramatic やっっったー！ in the way of a celebratory analogue.

That said, you're looking for the 'agreement' meaning, as in:

Anyone down for karaoke? / Fuck yeah!

In that case, the example conversation playing out in my mind resolves to

And in other cases...

Other words of agreement like 是非 or もちろん or いいよ just don't have the adequate punch. The enthusiastic volitional -o-! is my best suggestion.

In the case of agreeing with an opinion, rather than a suggested action:

Trump is the Abe of the West / Fuck yeah! (maybe you're goddamn right would be a better English response here, but the sentiment remains)

In this case, the enthusiasm and immediacy of the response capture the emotion more than the words.

As for the final possibility, satisfaction, I think Sjiveru's answer covers that quite well.

Not the answer you're looking for? Browse other questions tagged translation slang .