In typography, kerning is the process of adjusting the spacing between characters in a proportional font, usually to achieve a visually pleasing result.

In English and other languages that use the Latin alphabet, certain characters placed close to each other can be confused with another character that is visually similar to the combination of the merged characters. Some notable examples are rn↔m and cl↔d.

Japanese writing doesn't use spaces between words, so the other type of ambiguity introduced by bad kerning doesn't apply to it because Japanese people already live with it.

Are there any characters among ひらがな, カタカナ(ｶﾀｶﾅ), 漢字 and ローマ字 that, when placed close to each other, are often confused with characters that look similar to their combination? I'm not looking for a comprehensive list, but I'd like to know whether this happens in Japanese as well. I'm mostly interested in computer-displayed and printed text, but examples from handwritten text are welcome, too.

To clarify, I'm not interested in visually similar characters such as タ (katakana ta) and 夕{ゆう}.

As you know, most glyphs in Japanese fonts share the same width, so problems arising from kerning (or variable character widths, broadly speaking) almost never happen in Japanese typography. Well, we can think of some unrealistic examples... hankaku katakana ｲﾑ (i+mu) looks like kanji 仏 (ほとけ), and hankaku katakana ﾉﾚ (no+re) looks like zenkaku katakana ル (ru), and so on. (cf. Halfwidth and fullwidth forms) Basically these are mere wordplay.

In handwriting, this can sometimes be problematic. Occasionally people wonder what they are seeing is a single character or two characters. Clumsily written 村 can easily look like 木寸, and there are tons of similar examples. Of course we can usually understand what's written with the aid of the context, but vertically-written kanji numbers (一, 二, 三) on envelopes can be extremely difficult to read. 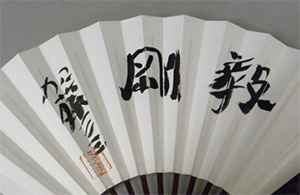 A fan with the name of 加藤【かとう】一二三【ひふみ】, a retired professional shogi-player

Not the answer you're looking for? Browse other questions tagged handwriting ambiguity typesetting or ask your own question.

5
On the legibility of Japanese writing (compared to the Latin alphabet with its variable letter height) – What's the correct kana height?
5
Can't recognize these handwritten kana (or kanji) in a text
4
What is a typical font size for Japanese text?
7
“Normal” handwritten Japanese
3
Handwriting in Japanese
1
Best practice height/character count for text in tategaki format