There appear to be some kanji and other characters such as ①, ②, ③, Ⓐ, ㊄, ㊗, ㊛, ㊑, and many more, which are enclosed in circles.

These characters are listed in unicode and there are quite a lot of them, with various seemingly unrelated kanji, as well as numbers and hiragana and katakana characters.

There is also a character called 'combining enclosing circle' which appears to be intended to circle the character before it, though this doesn't work in all fonts.

Finally, in Microsoft Word, when the Japanese IME is selected, it even offers a menu option to encircle a character in your document with quite varied settings as to how to display it.

It appears that there has been a lot of effort put into making these characters accessible, and yet they don't have any clear usage that I can find, or even a mention of them at all online. Why do these exist?

These characters have been used at least partly because Japanese typography preferred characters neatly aligned in a grid. These symbols share the same fixed width as kanji and hiragana, and it's easy to align them using the poorest word processors. We even have fixed-width versions of Roman numbers (Ⅰ, Ⅲ, Ⅷ) and Latin characters enclosed in circles and parentheses. 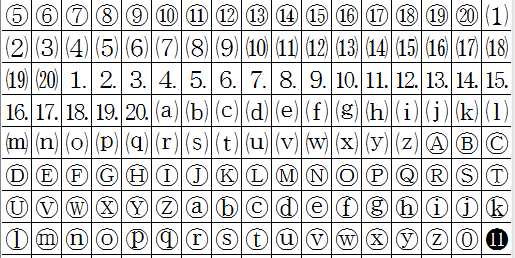 Despite the effort of some word processors and Unicode Consortium, the support for 丸囲み文字 has been unsatisfactory, and there were times when even the use of simplest 丸囲み数字 was discouraged in e-mails due to a certain compatibility issue. As a result, there characters became relatively unpopular these days.

Not the answer you're looking for? Browse other questions tagged kanji symbols unicode or ask your own question.

7
What does ㊙︎DVD mean?
5
How do I write out a multiple choice question in Japanese?
2
Is there any linguistic value behind encircled katakana letters?
0
Different ways of enumeration

28
Distinguishing certain characters in handwriting and print (Similar-looking Kana and Kanji)
9
kanji 有る, usage in the negative be verb
7
Usage of kanji for words usually written in kana
0
Rosetta Stone's usage of kana for words instead of kanji
3
What Unicode code points are needed to write Japanese Jōyō-Kanji?
4
Does Korean hanja usage correspond to Japanese kun'yomi and on'yomi kanji usage?
9
Why are Japanese fonts different to Chinese?
0
Usage of ★●■▲◆▼ shapes in different combinations
0
How do you read the double 々々 and what does this symbol ／＼ mean in the book?