If the ている form of these verbs doesn't mean that they're in a continuing action then what do they mean?

Q1 How do I use the ている form of these verbs.
Q2 What's the difference between using the past tense of these verbs and the ているform.

Doesn't it mean we already did it? Like if I were to say
Example 1

Doesn't this mean I already went home and I'm there?
Example 2

I ask this question because if the ている form here doesn't mean a continuing action but rather a continuing state then what does this state mean?

Q3. How do I conjugate these verbs into their progressive forms

ている is very simple. It's basically the moment when someone did a verb (past tense), receive a change in state, and the result can be seen clearly as a consequence of the verb.

notice that here the action 'eat' has been done. The speaker is in the state of eating as a consequence of doing the verb eat and start on the moment after the speaker bite, chew, and swallow. We regard this as progressive verb because as you did the verb, it is continuous.

落ちている It's on the ground

Here, you don't say that this means it is falling. Now imagine a coin is falling in the air from a table in midair. This coin hasn't done the verb 'fall', after all if this coin has done it, then we'd say the past tense (fell) while it is in the midair (which is weird). Here the coin has fallen (and we can see the state : on the ground).

verb + ing doesn't always mean progressive verb because some are instantaneous and doesn't possess the continuous manner (like the verb 'fall'). This type of verbs then, when changed into + ing, will mean that it is on the progress that the verb is going to be done (but not yet done... it's like on it's way to do the verb). (not the progress after the verb had begun).

Here's another example... we don't say, "he's dying". Because if we did, it means that the guy is still breathing, minutes away for what awaits him, where he'll die sooner or later. And that means the verb "die" hasn't been done.

開けている I have opened (door/window) [emphasizes the state of the opened ....]

閉めている I have closed (door/window) [emphasizes the state of the closed ....]

お腹が空いている My stomach is empty (hungry)

怒っている (I, you) am/are angry

作っている I have made ... [Emphasizes the state]

If you want to say "dying or falling" then you can just use the future tense... (I think?)

The motion verbs are included in the latter. When we say "going", we haven't done the verb "go" (we haven't arrive yet). So if you can say it in the past tense... then you can use ている for this class of verbs (I went to Japan --> you can say 日本に行っている). When you use ている, it means you are still in Japan. However if you use 行った, you might or might not be on Japan at the moment of saying.

Japanese has a lot of ways to say things. like 終わっているところ and 行く時 or just use the plain form with additional context or time specifications when trying to express your so "Progressive form of motion verb".

to help you differentiate these 2, you may translate ている as 'has/have'. 家に帰っている --> I have gone home vs 家に帰った --> I went home. 帰った would be used if you already left the house (Like in school/office you say... "Yesterday I went home."). But you will probably see that most of the time ている is not translated as 'have/has' because we want to emphasize the change of state. Have/has' is more of an action. 分かっている (I have understand it... and therefore : I understand (state of understanding the matter). It is often used by the speaker to reassure the listener that the speaker is capable/going to be fine. 分かった is an expression that is commonly used when one hears something afresh and understands that (like when a teacher tell you what you should do, you reply in this manner). In English it is typically "Yes, I understand" and "Understood.". So as you can see, as you might wonder what's the difference between the present tense, past tense, and the progressive/resultant state (like 困る、困っている、困った) in the future for some words, take note that sometimes the differences rest on the type of/special words used which will give special expressions that no other words will give.

困っている I'm troubled (State of being troubled, especially for over a period of time)

困った I'm troubled (modal た, when the speaker's expectation has matched or failed to matched reality --> this is not past tense!)

So you shouldn't be that worried. If you cannot differentiate the ている and past tense for a word (like 困っている and 困った) and they have the same meaning... it'll probably mean that the differences lies in the way of expressing and nuances. For these words, you will understand them as you receive more experience, familiarize with the words/sentences, and keep on studying Japanese. For now know that ている is a state (can be translated as 'has/have') and the past tense is an action.

信じている I believe in ... (I have believed in... therefore I'm in the state of believing)

I'm going to answer only about how to express someone/something is in a continuing action in Japanese.

落ちている
This phrase has two meanings:
- It is falling.
- It's on the ground.
We differentiate them by watching the object.

雨が降っている
This phrase has only one meaning:
- It is raining.

死んでいる
This phrase has only one meaning:
- He is dead.

In this article there is a very interesting expression: 生まれも育ちも高知です 土佐弁はですね、標準語では表現しきれないことが表現できるときがあるんですよ。 I was born and raised in Kochi prefecture of Shikoku. With the dialect (called Tosa dialect) of my birth place, there are times when it is possible to express things that cannot be expressed in the standard Japanese.

With using よる or ゆう, we can express someone/something is in a continuing action freely like:

落ちよる or 落ちゆう
This phrase has only one meaning:
- It is falling.

雨が降りよる or 雨が降りゆう
This phrase has only one meaning:
- It is raining.

死による or 死にゆう
This phrase has only one meaning:
- He is dying.

Isn't it regretful that you cannot express them in the standard Japanese? There is, though it is incomplete. It is not based on the conjugation of a verb, but is a method of adding つつ (conjunctive particle) and ある(auxiliary verb) to the continuous form of a verb. However, it couldn't express perfectly that someone/something is in a continuing action but has the nuance of entering the movement from now on. However, it is effective against "死んでいる" which cannot express someone is in a continuing action to death at all.

落ちつつある
This phrase has only one meaning:
- It is going to fall and has already started.

雨が降りつつある
This phrase has only one meaning:
- It is going to rain and has already started.

死につつある
This phrase has only one meaning:
- He is going to die and has already started.

What about 落ちているところだ? Isn't that unambiguous that something is in the middle of falling? – user3856370

As is shown above, user3856370 gave my answer a good example. So I would like to consider the example further.

Indeed when I hear the phrase with 落ちているところだ, I could image that someone or something is in a continuous action of falling. I admit that an ambiguous condition that 落ちている has is surely resolved, but ところだ in 落ちているところだ makes me image something like a frame taken with a camera. So, I have to judge the phrase is not sufficent to express that someon or something is in a countinuous action of falling.

Interestingly, "落ちていたとこだ" that is a past tense of "おちているところだ" does not depict a moving scene of something but to express a mark made by something or a place of something fallen to the ground.

I will express all of the answers by an illustration drawn below, so please take a look and feel the difference. 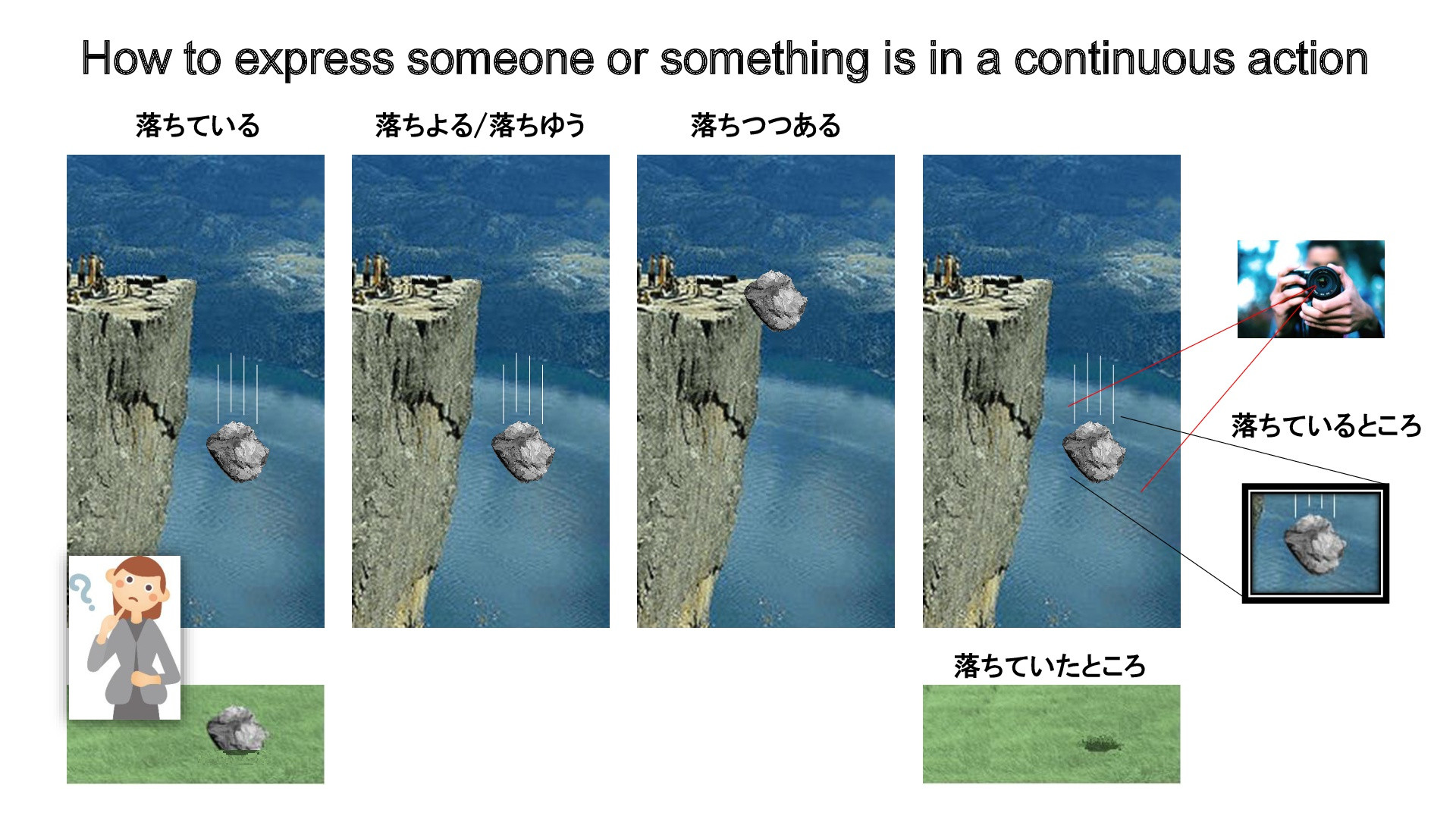 Pretty sure that ている form is always the state of doing that thing. Not will do, not doing in general, DOING RIGHT NOW. I think you can for the most part think of it as "ing" in English (although be careful, because "ing" can nominalize a verb, and ている cannot.)

Note, I believe you can force this as doing in the future aswell by adding time specification, for example

明日、５時で、働いています。 Tommorow, At 5 o'clock, I will be working.

Hope that helped. In short, I don't believe 行く、来る、and 帰る are any exceptions to the rule.

Not the answer you're looking for? Browse other questions tagged verbs conjugations .

8
Which forms of a verb do I need to memorize to distinguish ichidan from godan?
8
What's the difference between ～てある and ～た (past form)?
2
て-form and other conjugations of 謙譲語
2
Honorific and humble forms of suru verbs
3
Progressive tense used as adjective
7
What's the difference between an adjective's adverbial form and continuative form?
7
Is 寝る a stative or active verb?
3
Progressive form of movement verbs (or other stative verbs)
3
How to interpret intransitives in non-past tense