At what time did furigana start being used?

I was wondering if anyone could tell me when furigana started being used in Japan? I'm writing a research paper, and I've been searching and digging around for the answer but can't find it anywhere.

Short answer: In the words of Ariga, they're "as old as writing itself".¹

You might be surprised to learn that furigana is older than hiragana!

To understand what I mean by that, we'll have to make a digression first into what kana even means. The first thing to keep in mind is that the Japanese didn't invent the use of characters to write sounds. From the very beginning, the Chinese have been using their kanji characters to write sounds, too, just like kana. For example, the character 阿 originally denoted the Chinese word "a", meaning "large mound"; but it was often used to denote the sound a itself, not just large mounds—for example, when representing the Sanskrit name of the Celestial Buddha Amitābha, written in Chinese as 阿弥陀佛 *a-mi-tuo-but. The sound "a" could also be represented as 安, 亜, 悪 and several others. We call these phonograms. A phonogram is a kanji like any other, but it's being used to represent the sound only, discarding the meaning. Theoretically any kanji could be used as a phonogram, but for reasons that are easy to imagine, a few hundred kanji (like 阿) became especially associated with phonogram usage.

When writing was introduced in Japan, at first it was used to write Chinese, not Japanese. But even in this stage, the Japanese had the problem of how to write down certain Japanese words, such as personal names or place names. What they did was of course to take the already-existing phonograms and use them to represent Japanese sounds. These days people call these phonograms Man'yōgana, after the classical poetic anthology Man'yōshū; but the Japanese already used them way before the Man'yōgana, and it has been shown² that they used pretty much the same set of phonograms as their Chinese source, with a few Koreanisms thrown in (which makes sense because, as the Japanese themselves tell us in the Kojiki and Nihon Shoki, they learned writing from Korean masters). For example, here's a section from the Inariyama sword, though to date around 513CE:³ 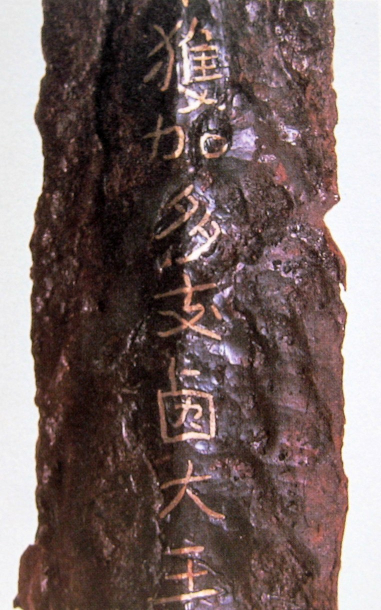 Though written in Chinese as was the norm, this sword has a long list of Japanese names written in phonograms. The section above shows the characters 獲加多支鹵大王, phonograms for わかたきろ-大王, some Great King Waka Takiro.³ Around the 8th century, the same technique would be used to record full Japanese poems in the Kojiki (written in Chinese but with Japanese quotations), and increasingly for Japanese in general.

(What were phonograms called back then? Well, they were "borrowed names", or… 仮名 kana. The word was opposed to "true names" 真名 mana, or kanji used for meaning. Note that, at this stage, kana weren't considered to be different characters than kanji; only different ways of using the same characters.)

Let's look at a page of one of the oldest surviving manuscripts of that Kojiki, the oldest text (ca. 712) with Japanese literature in it. This is from the Dōka copy, ca. 1381 (courtesy of kojiki.org):

We have a normal section in Chinese-style, 次天之常立神; but then comes a curious note in smaller type, 訓常云登許訓立云多知—set in two columns, just like the Chinese did in their tradition of commentaries and annotations. This isn't something invented by this manuscript only; all Kojikis we have do this, and the author describes what's he's doing in the preface, so we know it's part of the original work. What's going on with it? This sentence starts, like much of the Kojiki, introducing a deity: next (次), comes the Heavenly… 天之{あまの}… something-or-other-no-Kami 神. The author then tells us how to read the hard part in the middle, that is, the core name of the god: use a Japanese kun 訓 reading for ‹常›, 云=pronouncing it as toko (glossed in phonograms, 登 to 許 ko). Then use another kun 訓 for ‹立›, 云 pronouncing as tachi (in phonograms, 多 ta 知 chi). We can finally read the god's Japanese name: Ama-no-toko-tachi-no-Kami.¹

This is, in most ways that matter, the first Japanese book, and it has furigana.

Though the above are the same as furigana in function (they're a phonetic notation on how to read kanji, distinguished from the main text in smaller type), they're still not quite the same in form (they follow the text as instructions, rather than being parallel with it). Modern furigana are a type of interlinear gloss, a "writing between the lines" (or columns). These also have precedent outside Japan, but to avoid even more digressions, let's skip to the part where Buddhist priests put two and two together and started using interlinear glosses to help with reading holy texts aloud. Buddhists in particular cared a lot about that, because 1) they wanted to instruct novices in Buddhism and spread it as efficiently as possible, and 2) they believed that preserving the proper enunciation of the mantras was important for them to be effective.⁴

So you see, Japanese Buddhist monks studying classics in Chinese had all the tools and all the motives to gloss the pronunciation of kanji using phonograms, and that's what they did:³

This table lists some phonograms used side-by-side with kanji, like modern furigana, in the Buddhist text 阿毘達磨雑集論 Abidatsuma Zōjūron (ca. 800). I'm only quoting the ones with an -a vowel for brevity; see the references for more. (Similar developments in phonogram notation took place in Korea, too⁵). Did you spot our friend the phonogram 阿 in the title of the text? Abidatsuma 阿毘達磨 is a transcript of the Sanskrit word Abhidharma, a kind of religious text. And, as we might have expected, 阿 is listed in the table as a furigana for the sound a in the manuscript, too (in a somewhat decayed shape). Unfortunately I couldn't find online images of the manuscript (if anyone has access to relevant materials, please post them!).

But wait: something's off here. Symbols like 和 for wa or 万 for ma are clearly phonographic kanji as described, but others look like pretty much like modern katakana. We've seen in the Kojiki that the character 多 was used for ta, for example, but here in the Abidatsuma it's been reduced to a single タ – our modern katakana for it. And the one for ya looks less like its putative kanji, 也, than the modern hiragana や. What happened?

This is the final piece of the puzzle: graphical simplification. If you've ever tried to draw characters with a brush, you know the ungodly amount of work that is to draw a lot of them. If you're writing cute Japanese words like Ama-no-tsune-tachi-no-kami with full-blown kanji phonograms, you'll be sitting there the entire day (in fact the author of the Kojiki famously complains about that in the preface; it's the reason he gives for using convoluted kun readings, like writing ama- "heavenly" as 天, rather than just writing everything as phonograms, like 阿万). But the difficulties of drawing too many strokes didn't afflict just the Japanese, and Chinese writing already had its own solution to draw things more easily: the same we had in Western handwriting, that is, cursive. Here's an extract of a cursive piece by a celebrated Chinese calligrapher, Wang Xizhi (303–361; image via the met):

Notice how this piece conveniently portrays one Chinese use of interlinear glosses. Does the flowing style feel familiar? I'm sure you must have noticed that あ is just a cursive 安, which had always been a common phonogram for a, and 也→や, too, is clearly recognizable. If you're not convinced of how are these shapes related, watching them in movement should make it clear.

These simplified forms lend themselves naturally to phonogram use, because they're so convenient, and phonogram is so verbose. I've been glossing (heh) over this, but there's been a tendency from the beginning to use simplified shapes for phonograms. One of the Japanese innovations was the gradual specialization of ultra-cursive forms to phonogram use, mixing them with fuller characters meant to be read by meaning. This is unlike Chinese in that now there was a clear visual indicator of how each character should be read: if they're ultra-cursive, read as phonograms. This is hiragana.

As we said, quick-and-dirty hiragana was a natural fit for furigana glosses, as in や in the Abidatsuma table above, or the bottom one in the ka list (𛀙; it looks like a の with an accent, but it's actually an old cursive version of the phonogram 可 ka). There emerged also a second method of simplifying characters, associated with Buddhist glossing: just straightforwardly abbreviate them. Draw only the first two strokes of 阿, giving ア, or half of 多 for タ, or half of 加 for カ, and so on. Both kinds of simplified characters became specialized for phonogram use, in no small part thanks to their role as furigana glosses for kanji. In fact, you might have spotted a normal furigana ト already in the Dōka Kojiki manuscript shown above—this wouldn't be as old as the original Kojiki, but it's still pretty damn old; by the Heian period modern-style furigana can already be found in manuscripts… about at the same time as one finds modern-style kanji/kana Japanese text.

What I wanted to show with all this exposition was that all the ingredients were there from the start: kanji, phonograms, annotations, glosses, simplified shapes, all predate the introduction of writing to Japan and have parallels elsewhere. And the particular system they formed in Japan evolved organically, and organized itself naturally; furigana, okurigana and the very hiragana/katakana themselves, all of it happened together as a coherent whole.

Not the answer you're looking for? Browse other questions tagged history furigana or ask your own question.

8
Can "furigana" be used to refer to ruby that isn't kana?
3
Did the modern usage of katakana predate the Americans?
7
What's it called when furigana push characters apart because they're so long?
3
When did the word 「女性観」 come into standard usage? Is it a more politically-correct form of 「婦人観」?
7
History of Japanese "Vulgar" Vocabulary
8
Why was つ originally used to mark consonant gemination? When was that?
8
Academic/historic attempts to create an alternative writing system similar to Hangul?
6
Ordering of writing furigana in multi-character words
4
How do I ask about books that include furigana for the kanji?
3
Why does furigana often appear in the most unnecessary places in Japanese books?