I have embarked on a project of translating a novel I am writing into Japanese in parallel with writing it, and one of the hardest parts for me (in contemplation, I haven't really gotten that far) is figuring out what pronouns are appropriate for the various characters I am developing. I was wondering whether anyone could give me a rundown on what a person's choice of first- and second-person pronouns says about them and their relationship with the person they are addressing.

The setting makes it a bit difficult, because while the main characters are high school students, the 'fantasy' nature of the work means that primordial quasi-deities, hundred-million-year old demons, several-hundred-year old elven royalty and aristocracy, and such are not uncommon. For a very small number of characters, I have a clear idea of what pronouns they might use, but I don't have enough experience to decide on many others.

This might be a bit niche, but really I am looking for a guide on archaic and modern Japanese pronouns and the association they have with characters and situations.

(I probably won't go so far as to have dialogue in Classical or dated Japanese, but that is a possibility as this project unfolds.)

The pronoun associations you're looking for—old men use washi, tomboys use boku and so on—are more a trope of fiction than of real life (to an extent, even things like "women's speech" are more a prescription or ideal than an accurate description of real-world speech patterns). Luckily, someone has been studying exactly those tropes: Satoshi Kinsui, who calls it 役割{やくわり}語{ご} or "role speech". Take a look at this example (from this Japan Foundation page): 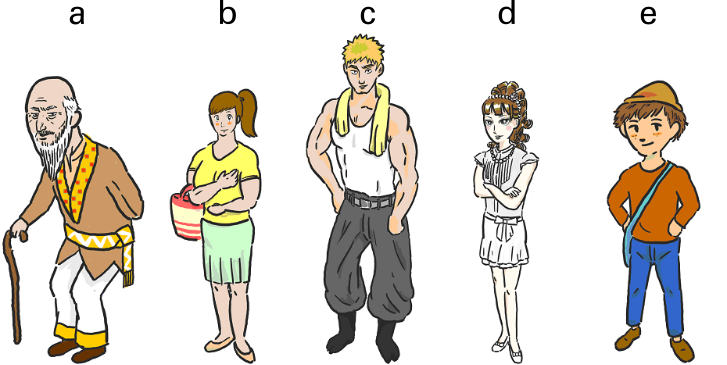 Can you connect the characters above to the speech patterns below?:

It's not the kind of thing they teach you in Japanese classes, and again, it's not representative of real life; but if you've been reading manga or playing videogames, it will sound incredibly familiar and quite self-evident.

So I recommend you look for Kinsui's work, starting from wikipedia or his website. If you have access to Japanese sources, try to get some of the material published on yakuwari-go. Consulting Kinsui's 〈役割語〉小辞典 I can find, for example, that the pronoun nanji:

I'm posting a summary of the entire entry because I want to give a sense of how extensive is Kinsui in laying out fictional patterns of language and their associations. If you're interested in the topic, I highly recommend this author. See here for an introduction which lists some pronouns; if you're unsure about the connotations of any of them, you could try looking'em up on nicopedia, or just general web searches (the keyword 役割語 is your friend).

That being said, the most natural way of learning these tropes is to expose yourself to them. If you want to write fantasy, why not binge on fantasy novels or manga? High-school students interacting with elves etc. is an entire subgenre (including e.g. the aforementioned Rayearth), and if you like light novels, there are more of them than anyone could possibly handle. Go read stuff you like, and take notes on which pronouns are used by which kind of character when addressing who—and not only pronouns, but also verb inflections and such. You'll not be procrastinating, it's research!

what pronouns are appropriate for the various characters I am developing.

what a person's choice of first- and second-person pronouns says about them and their relationship with the person they are addressing.

the main characters are high school students, the 'fantasy' nature of the work means that primordial quasi-deities, hundred-million-year old demons, several-hundred-year old elven royalty and aristocracy, and such are not uncommon.

I am looking for a guide on archaic and modern Japanese pronouns and the association they have with characters and situations.

The most primitive form for the first-person seems to be あ, but this might cause a problem of not being understood by us native speakers. I think for young characters, われ is good for boys, and わらわ for girls, although われ for both boys and girls seems to be more accurate.

If the high school students you mean they are modern people, then you know that, 僕 or 俺 for boys and 私 for girls.

For these... For example, I see that Kenji Miyazawa made an old female snow deity call herself あたし, in his short-story, 水仙月の四日 written in the early 20th century.

For the second-person, they are more likely called by the proper names or the nicknames, except adults from the perspective of children; they might use such as じじ, ばば to call their grandpa and grandma.

28
How should I select what first-person pronoun to use?
14
In actual Japanese society, how often are second-person pronouns used?