Those these seem to come up all the time, for the most part I'm unclear as to how to differentiate them. Per the title, what are the subtleties in use and meaning between: 特殊, 格段, 特段, 特別, and 別段?

In daily language, 特別 is the word with broadest meaning that is approximately same range as English special. 特別 can replace any other word you've mentioned in most settings (unless there's predefined terminology), only with possibly less exact and/or apposite feeling.

特殊 suggests that something belongs to a rarer type/class rather than one-off uniqueness. The word carries an overtone that you're trying to categorize it. The word also sometimes stands for euphemism of unlaudable quirkiness.

特段 and 別段 specifically refer to that treatment or consideration is special. You can read the 段 as "case", so that they mean "of special case" and "of separate case". 特段 sounds like needing more carefulness than 別段. It should be noted that they may be more seen as a part of idiom "not particularly".

（特段／別段）の定めがない限り unless otherwise specified
（特段／別段／特別）異状は見当たらなかった。 I found nothing particularly unusual.

I think my previous answer was inadequate, so I carefully examined various materials and dictionaries and thought about the answer, but by this answer I thought I could not solve the questioner's problem and I decided to stop the work.

After that, I thought about the way to explain subtle differences between the five words of similar meanings given by the questioner to those who are not Japanese native who are studying Japanese.

I thought about how to grasp the difference between these words if we are Japanese.
First of all, we first check the sound by looking at these words. Next, we suppose some possible words from the sound, then narrow down the words by looking at the kanjis of each word.
As an answer to the questioner, I thought, the analogy of narrowing down the possible words by the kajis is effective.

All five words given are made up of two kanjis. If I separate all the kanjis constituting the five words apart, I could get five different kanjis. Combining the five kanjis by 2 characters gives a total of 20 different words. Of these words, 13 are meaningless combinations, and only 7 are left as meaningful words. The questioner found out five of the seven meaningful words.

Although the result is not sufficient, I felt that such a probing method may be meaningful for knowing the similar words' differences. 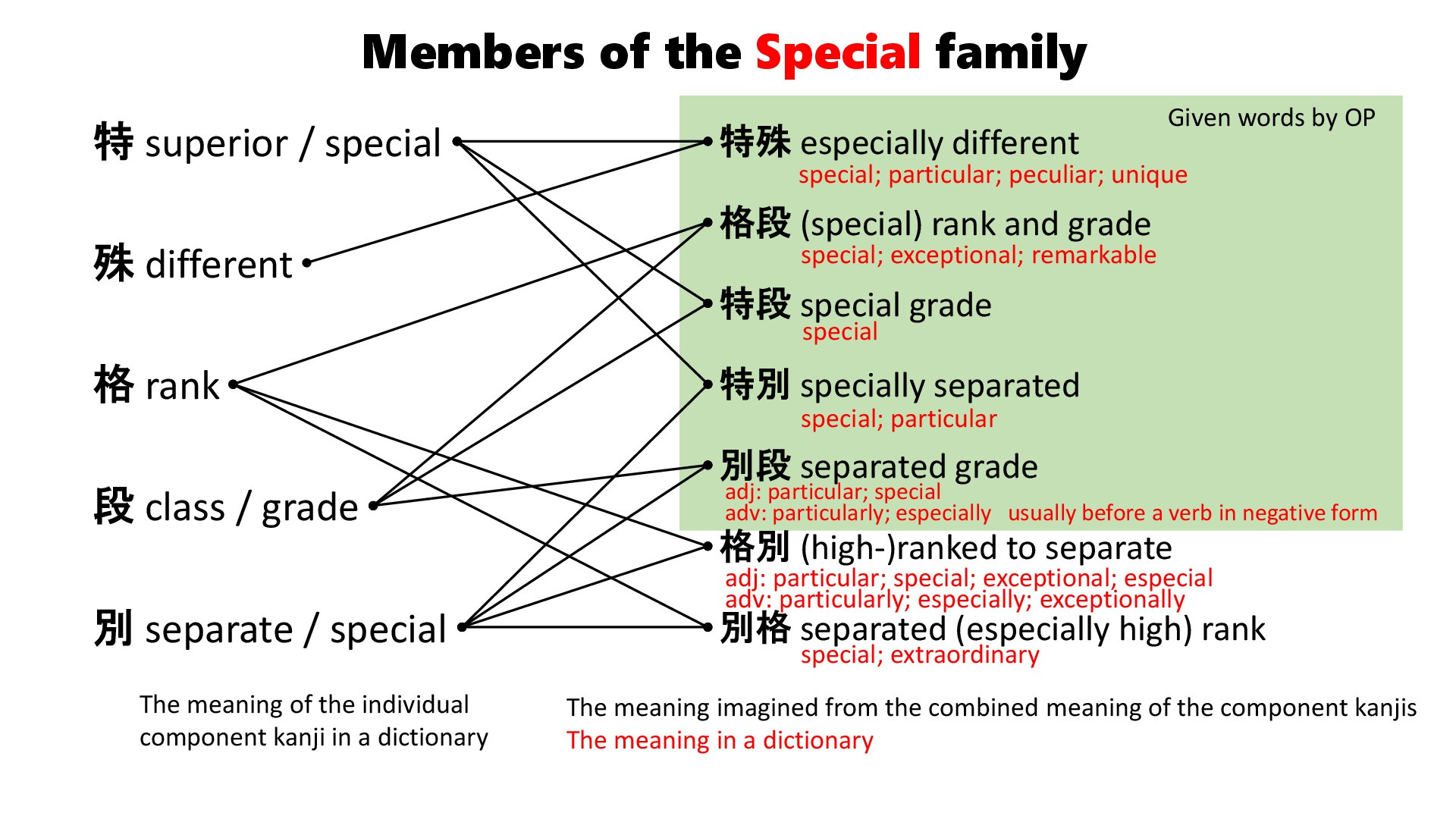 Here is a table of the synonyms of 「特別」 classified according to the meaning. If you have enough time, you could know which word is used well by checking the frequency of each word on the Internet.