I am creating a present for a Japanese Taiko drummer. He is my teacher and is celebrating his birthday tomorrow.

The present will be the Muppet character Animal sitting at a shime daiko, his bachi at the ready. I would like to add a kanji to those bachi to mark them as Animal's.

A taiko drummer considers his/her bachi as an extension of themselves. They mark their bachi (drum sticks) with a kanji representing their name. This is a solemn act by which they put their own soul into the bachi.

I have googled for the translation and have been swamped with a lot of alternatives and can't make out which one would be best for me to use given the above scenario. Considering the symbolic nature of marking the bachi, I'd rather leave them unmarked than make a mistake.

I'm not sure that you're looking for a translation of "animal". I think you're looking for Animal's Japanese name. If he did have a localized name that was in fact written in kanji, then you could use that. But that does not appear to be the case. It appears that his Japanese name is simply his name transliterated. On a few different sites, I saw his name written as アニマル. This Fandom wiki page has アニマル: 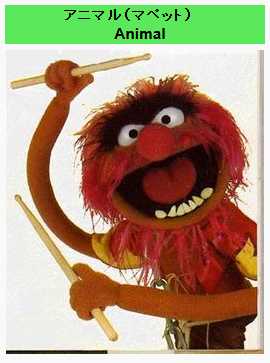 So if you want to brand his bachi with his name, then I would suggest アニマル.

Not the answer you're looking for? Browse other questions tagged names nouns or ask your own question.