Reading order: “Wolf and Spice” or “Spice and Wolf”?

I've noticed the animation series named 狼と香辛料, or "Ookami to Koushinryou", is sometimes referred to as "Spice and Wolf" and sometimes as "Wolf and Spice". Now, I'm no expert in Japenese reading order, but I do remember that it's basically the reverse of English; and that "to" means "and", and "Ookami" means "wolf". That should imply the correct reading order is "Spice and Wolf" - but is it actually more symmetric and can be read both ways?

[Japanese] is basically the reverse of English

is mistaken on this point.

Lists in the Japanese language function exactly like their English counterparts. i.e., if a Japanese speaker says, 大きい方から読みます (I am going to read from the largest to the smallest), they don't then say 1,2,3,4,5; they say 5,4,3,2,1 -- just like we would in English.

Might a translator reverse the order of the items in 狼と香辛料?

Sure, because that's not exactly an ordered list, but this implies nothing about the sequence in which a Japanese speaker would think of the terms. There's no linguistic reason whatsoever to do so; it's merely a stylistic choice.

I'm sorry I misunderstood the fact that 狼と香辛料 Ōkami to Kōshinryō is originally a Japanese light novel series written in Japanese, and later, Yen Press licensed the light novels and is releasing them in English in North America by the title of Spice and Wolf.

Now, I'm no expert in Japanese reading order, but I do remember that it's basically the reverse of English; ...

It is your misunderstanding. Of course, there are always exceptions, but basically the order of words including the title of the light novel is the same in Japanese as in English.
If "Spice and Wolf" is better than "Wolf and Spice" in English, the reason may possibly lie in English language, not in Japanese.
So, the reason why Yen Press translated the title 狼と香辛料 into Spice and Wolf seems to be off-topic for Japanese learners.

If I think about the reason why the author of the original light novel titled it 狼と香辛料 not 香辛料と狼 is that the former one might be superior to the latter one from the standpoint of beauty when the title is written or the tone in the pronunciation.

As for the beauty of the placement of the combination of kanjis and a hiragana or the tone in the pronunciation of the title, it depends greatly on the aesthetic sense of each individual, and I think the author's aesthetic sense chose the order of the words as it shows.

I could guess another reason for the order of the Japanese title 狼と香辛料.
We are familiar with 狼と赤｛あか｝ずきん or 狼と赤ずきんちゃん or simply 赤ずきん, which is "Little Red Riding Hood", or "Little Red Ridinghood", also known as "Little Red Cap" or simply "Red Riding Hood", that is a European fairy tale about a young girl and a Big Bad Wolf. So the sound of 狼と〇〇〇 is a very familiar word order for us Japanese. I think the word order also affected the author when he thought about the title of his new novel. 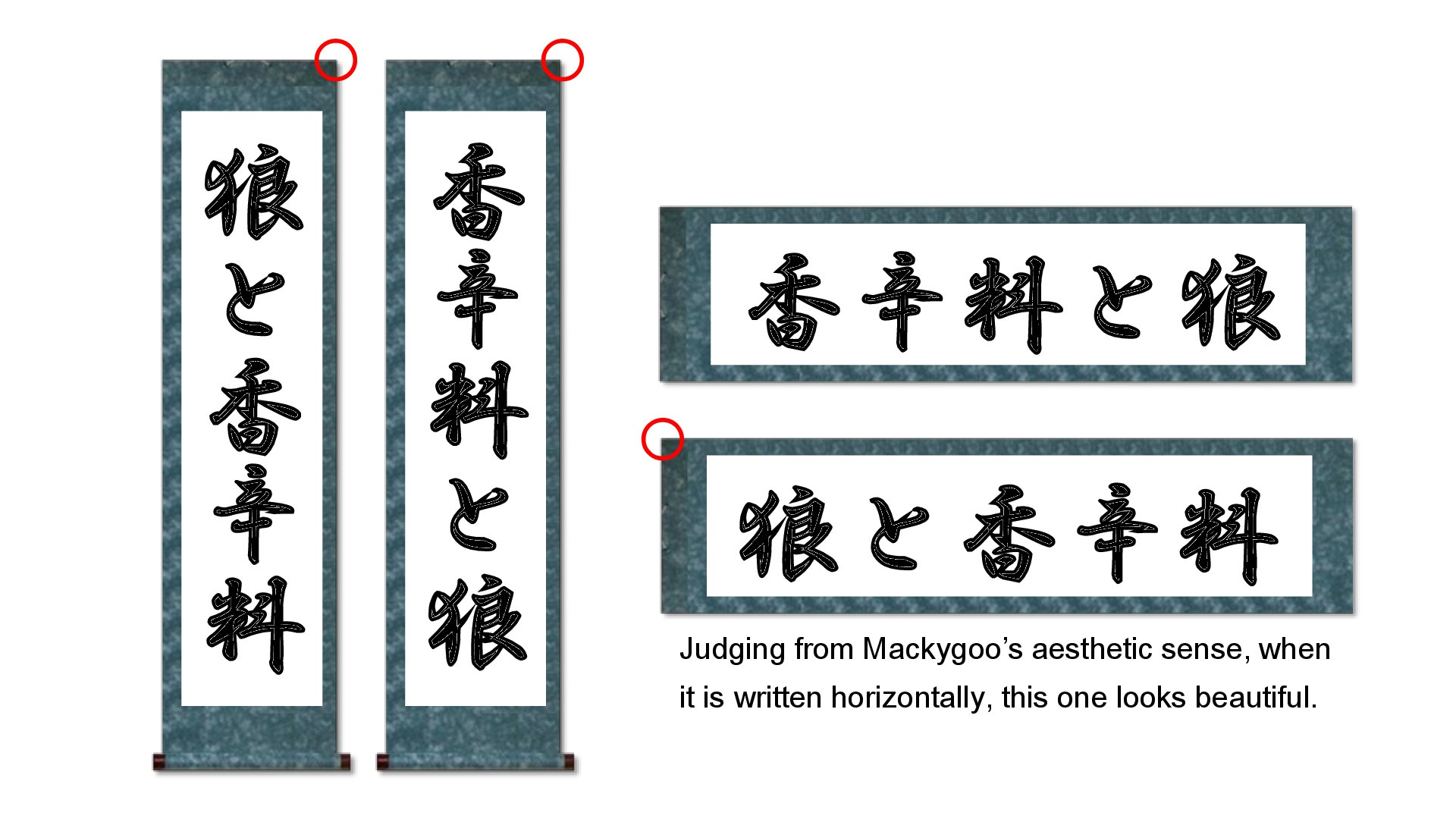 It's not always backwards, though it is quite often. Wolf and Spice is usually what you would encounter in translation because it follows the order in which it was listed. Likewise, you would say the phrase "cats and dogs" as 猫と犬。You could reverse the order in English, and it would be reversed in Japanese as well.

However, this appears to be an exception since when I looked up the series on amazon I found this.

Not the answer you're looking for? Browse other questions tagged grammar reading-comprehension or ask your own question.

19
Passive form - The exact difference between を and が
4
The usage of ので etc to leave sentences “hanging”
9
Different ways to “try”
4
Questions about comparatives
2
Is this phrase correct?
9
I still can't understand how to use でも (and what it's supposed to mean)
1
What is the meaning of いくらもしないうちに from Spice and Wolf?
17
Different meanings of こわい
3
What does なり切ってしまう mean?