What's the 日本語 equivalent of saying "That's none of your business"?

In my feeling and personal experience "it's none of your business" is just one of those sentences you don't hear that often in Japan most likely because it's quite direct and (kind of) offensive. And as you know Japanese people tend to avoid this generally.

That being said (and I might be wrong), it doesn't mean there is no way to say it.

According to weblio and to a native speaker I just asked to the closest translation is:

In the sample sentences you can also find いらぬお世話だ and 大きに御世話だ (*) but the first one I quoted above is translated as "none of your business" also by my dictionary as a whole.

Probably another, more literal, way to say it would be: あなたには関係ないことだ。

Not being a native speaker it's hard to say which one of these would be more natural and more commonly used though. As I said I believe the first one, but maybe someone can leave a comment.

PS. Related to what I said in the beginning, it is interesting to notice how in Japanese the literal translation is totally different. In fact, literally it is like "(it is) an excess of favor/assistance (on your side)". If you think about it this is very much in line with the Japanese way of saying things indirectly. They are not telling you that something is not your business, they are telling you that you are "minding too much" implying between the lines that.. it's not your business. :)

I thought it could be interesting to add this (personal) interpretation as a more "cultural" note.

(*) Note in the comment that at this point it seems unclear if the correct form is 大きに御世話だ (as in the reference weblio) or 大きな御世話だ (as Naruto pointed out).

In my feeling and personal experience "it's none of your business" is just one of those sentences you don't hear that often in Japan most likely because it's quite direct and (kind of) offensive. And as you know Japanese people tend to avoid this generally.   <from Tommy's answer>

We don't say this kind of direct phrase to others usually in Japan, but you can hear the phrase like "None of your business", or "None of your concern" in a family.

Boys and girls at a rebellious age sometimes would say towards their parents 放｛ほ｝っといて！ or 放｛ほ｝っといてよ！when their parents try to be concerned about their children.

Even in Japan, a strong-minded woman may sometimes say flatly or even with a pretended gracious manner to the same sex opponents usually in her work place; 放｛ほ｝っといてくれる, 放｛ほ｝っといてくれますか or 放｛ほ｝っといてください, besides 邪魔｛じゃま｝しないで or 構｛かま｝わないでくれる meaning It's none of your business. 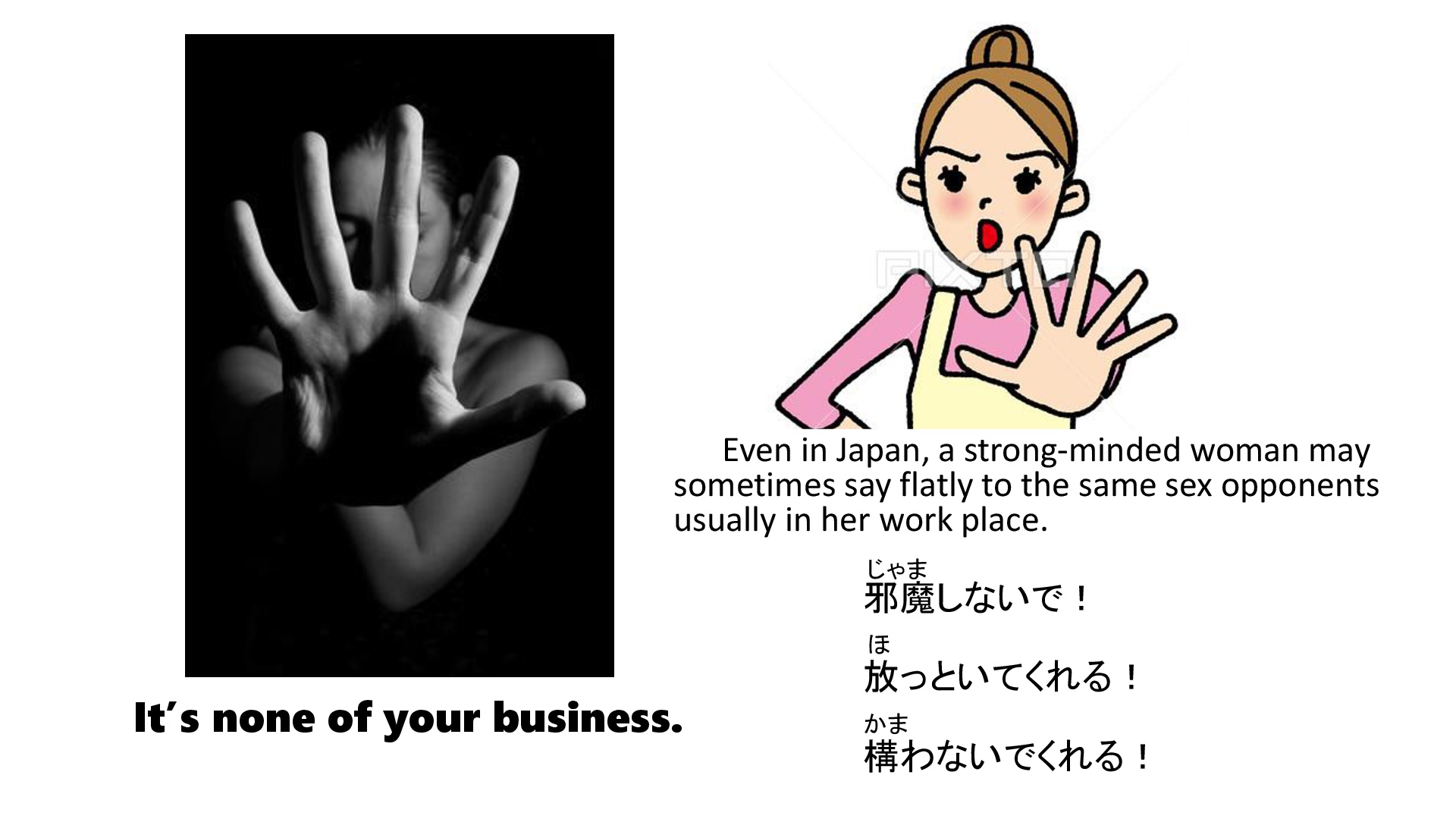 Here are a couple common phrases:

For future reference, for common phrases like this, if you go to jisho.org, select the "Sentences" tab and plug in the word/phrase, you will typically get a variety of sentences showing different ways of saying the word/phrase you're looking for.

You didn't mention the context, but if you're among close friends (or maybe if said jokingly at a drinking party to be funny) you could say:

A word of caution: under no circumstances should you say the above in a formal situation or when addressing people you are not close to.

Generally, I think あなたにはかんけいないです or あなたにはかんけいのないことです are pretty good substitutes. 余計なお世話 is similar, but in my opinion, it doesn't quite have the same nuance; I feel like 余計なお世話 means something more along the lines of "you're sticking your nose in where it doesn't belong," or "nobody asked you to do this, so keep out of it." On the other hand, かんけいない really does have a similar meaning to the English phrase--"It has nothing to do with you" is a pretty literal translation of it, so you can see why it works pretty well. It should go without saying that you should be very careful if you actually plan to say these things to people, and you should consider whether or not to say them at all.

Other very modest expressions for the person:

In Japanese, there is a way to express "none of your concern" at least offensive tone yet send through a strong meaning of not to meddle with someone's else issue.

[The issue] has nothing to do with you;

You have no relation with this [issue].

The word 関わり means relation or connection (the verb counterpart is 関わる). So when the word is negated, 関わり (in relation) becomes 関わりのない (no relation).

The sentence can be expressed with neutral or serious tone, depending on the speaker expression and status quo. There are some variations that may be heard likewise.

Because it holds such a strong meaning, the sentence is usually used between strangers and people with relationship gap. One shall not use these sentences against good friends.

Since nobody else has said it yet, I would point out that the word 迷惑 also has some of the implications of the English. Although it's more often used to mean "making a nuisance of yourself" generically, rather than trying to solve other people's problems specifically.

Not the answer you're looking for? Browse other questions tagged phrase-requests or ask your own question.