What to say after someone sneezes

It's happened several times: I'll be chattering away with a friend in Japanese, and they'll sneeze, and without even thinking about it I'll revert back to English to say "bless you." Is there a set phrase in Japanese I can use after someone sneezes?

Here are the results from a small poll on Facebook. Six native Japanese replied. The results can be interpreted as:

And here are the actual results (I didn't create any of the options, it was a blank poll when I asked the question): 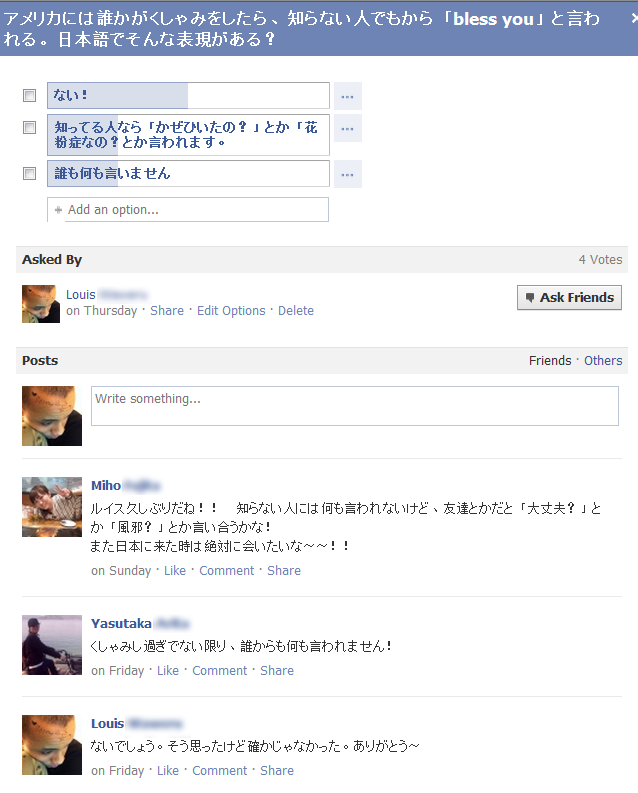 In my understanding, Japanese normally does not interfere with other's personal stuff most of time. So, they don't use those after sneeze. But if influenza is hot during that time, they may ask "Are you ok?".

And some people think that silent and unchanged facial expresssions are elegent on sneeze here, so there is some sneeze contest 「くしゃみ対決」 by intentional putting some tissues on their nose. And they try to decide least silent and without facial expressions change as winners and some are called 「イケメン」- a slang which means some kind of pretty boy.

But looks like in Okinawa, people use "クスケー" after sneeze, according to this, 2, and origin.

I've researched a bit and it seems that such expression doesn't really exist in Japanese. There is a kind of explanation for this:

In the Western societies, there used to be a belief that sneezes could release one's soul, therefore putting it in danger because it could have been "captured" by lurking evil spirits; or it was believed that the mouth opened would allow those spirits to enter the body.

This point of view had strong religious features which, as we all already may know, weren't this strong in Asian countries or, better, they were totally absent.
This "caused" an expression such as "Bless you" to be missing. In fact, sneezing in Japan is considered in a different way than it was originally in the Western countries:

"[...] in Japan, there is a superstition that if talking behind someone's back causes the person being talked about to sneeze; as such, the sneezer can tell if something good is being said (one sneeze), something bad is being said (two sneezes in a row), even if someone is in love with them (three sneezes in a row) or if this is a sign that they are about to catch a cold (multiple sneezes)."

We could say that the most similar/close expression, which someone already mentioned in the comments, is お大事に [おだいじに]; but it is not the exact "corresponding" expression (the meaning is "Take care of yourself") and it's not really used that much.

Finally, considering that in Japan the usual is that you don't say anything, and that it's not common if you do, it might be better to follow the local custom.

In Tokyo, currently, people comfortably ignore other people's sneezes. Of course, when your family (or a close friend) sneezes, it is common to ask 風邪ひいた？ (caught cold?) or something like that. However, this is equivalent to asking such questions to your family member trembling or looking pale.

A common Japanese experience in the US: when they sneeze, someone speaks a short phrase, but it is confusing because they have no idea what is going on.

Seven hundred years ago, when someone sneezed, they or people around them said くさめ. That practice has disappeared although the noun for a sneeze is still くしゃみ.

During my 5 years working in Japan, I normally just heard "are you ok?", which is "Daijyobu?"

大丈夫ですか？ Simply saying that is enough to smooth the conversation or whatever. But I still believe it depends on various situations.

Depends on the number of times you've sneezed.

Bonus points for you if you can figure out the reason for above suggestions! ← rescinded as previous answer by Alenanno pretty much gave away everything! His was another variation. Mine had そしられ first, 笑われ second.

I've been in Japan 3 years myself and haven't heard anyone respond to my sneezes. Although I'm American, I never say "bless you" to anyone in the states or here in Japan. As long as they're not sneezing on me, I feel like nothing needs to be said.

I have to agree with other posters that it gets pretty annoying to hear bless you all the time. I worked at a place where one lady would say pardon me. I swear that woman sneeze at least 20x in an hour. I finally brought earplugs to work to drown her out!

Growing up in Asia as a person of East Asian origin, strangers do not say anything says when someone sneezes; family members and friends would ask if you were sick, that's all. It just isn't part of social norms here to say something when someone sneezes. I believe this applies to China, as well as to Japan.

Not the answer you're looking for? Browse other questions tagged set-phrases culture .

20
What to say after someone dies
31
How would one convey "get over it" in Japanese?
11
How would one convey the concept of "vouching" in Japanese?
2
Is there a Japanese saying like その頑張りは、すべてむだというかそういう気持ちになる , related to the working conditions of doctors in a hospital?
6
Is それが人生{じんせい} , 仕様{しよう}が無{な}い, or something else the most natural equivalent to "that's life", "c'est la vie", etc?
0
Equivalent of "That said, Carthage must be destroyed" in Japanese
5
Is there any phrase similar to "may he rest in peace"?
7
Saying "I have no need for 'that'" ('that = insert any phrase') in three different circumstances and in various degree of politeness
2
How to ask "How about you?" after answering a question yourself
0
Using nicknames or first name with high school peers