How do I decipher each word in a sentence, if all is written in hiragana?

I don't know what this sentence means. "相変わらずつーといえばかーだね". I tried using google translate but it produces way too different meanings, when I try to translate the sentence bit per bit.

ex. 相変わらずつーといえばかーだね= As usual I can not stop talking to you.
つーといえばかーだね= It's awfully cool
つーといえばかー= Wait a minute.

Does this mean that the original sentence means "As usual she's awfully cool."? Is the word for word of the sentence like this; 相変わらず つー と いえ ばかー だ ね? or is it 相変わらず つー と いえば かー だ ね?
But the words: つー and かー do not make sense to me.

「つーといえばかー」 is an idiomatic expression describing what great communication two persons have with each other. You just have to memorize it.

I honestly do not know how you could get "cannot stop talking to you", "awfully cool" or "wait a minute" even if 「つーといえばかー」 were not an idiomatic expression.

"As usual, (the two persons) have great communication with each other, don't they?"

Finally, regarding where 「つー/つう」 and 「かー/かあ」 come from, they are both sentence-ending particles. The latter has remained till today but the former has changed to 「とさ」.

「とさ」: Used as a quotative or expressing hearsay as in 「その後{ご}、おじいさんは幸{しあわ}せに暮{く}らしたとさ。」

It is probably faster if you memorized the idiomatic expression as is without analyzing its components.

This expression is far more common among native speakers than you might think. There used to even exist a large cellphone company named 「ツーカー」. A nice name for a cellphone, isn't it? 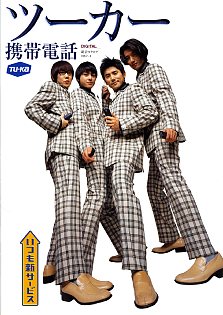 Not the answer you're looking for? Browse other questions tagged set-phrases hiragana or ask your own question.