The usage of 一覧

Let me describe the scenario first. The lever of the following faucet can only be turned 180 degrees until the tip of the lever touches the base. However, because the lever can be detached, I can turn the valve up to 900 degrees (= 5 x 180 degrees). 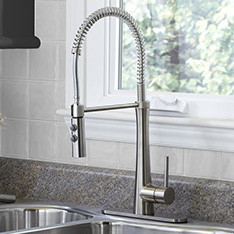 Today my coworker borrowed a hose that I also wanted to use. He had to fill several buckets. Because I did want to wait too long for him to fill all of the buckets, I turned the valve 900 degrees such that the water flowed faster, which in turn reducing the time taken to fill of all the buckets.

Once I turned the valve, I leaved it and resumed my own job. Several minutes later, he called me and said something like this:

Note that my listening comprehension is not good enough.

I looked up the dictionary, 一覧 means "at a glance". So does the sentence above means "I cannot close the valve quickly, don't turn the valve 900 degrees!"?

Generally, how to use the word 一覧?

一覧する exists as a verb, and it means "to take a brief look (from start to end)", "to give a glance," or sometimes "to have a full view." But it's uncommon and literary, and you will hardly hear this in everyday conversations. 一覧して can mean "at a glance," but 一覧 on its own do not work as an adverb.

So... you must have misheard something. I'm pretty certain that your coworker did not say 一覧, although I have no idea what he actually said. One similar-sounding word is 一旦 (="once"). 一旦止められない doesn't make sense, but you can say something like this:

20
What is the origin and usage of the word いい?
3
What is the difference in usage of [実行]{じっこう}する and [実施]{じっし}する?
3
Usage of からな at the end of a sentence
6
usage of から at the end of the first sentence with the second part in the next
4
Usage of で in the following sentence
1
Is usage of を片手に necessary in this paragraph?
5
Difference between the usage of 準備 and 予習
2
What are the meaning and the usage of 体 【てい】?
0
現金 and 金 what are the similarity and difference in usage?