Does Okinawan have syllables Japanese doesn't?

I know Okinawan is usually (nowadays) written in katakana. However, katakana only has a limited number of different syllables, fewer than can be produced in, say, English (e.g. th). Does Okinawan have any syllables that don't fit in standard katakana? If so, how are they written?

(Disclaimer: my knowledge on phonology and Okinawan is very limited)

To distinguish in writing:

There are also some sounds which are no longer used in modern (mainland) Japanese, but the writing system using kana doesn't seem to be very standardized. 船津 uses these new hiragana, and other groups use various combinations of existing kana to represent such sounds. See this chart. This article by 船津 (PDF, in Japanese) compares three proposed orthography systems using kana (including his own system).

Yes, many sounds from Okinawan languages do not fit kana, but everyone sort of makes do with hiragana, katakana and kanji.

On that note, it is only common to write Ryukyu words in katakana when the main sentence is Japanese and mainlanders are going to read it -- in particular if mainland Japanese are the ones doing the writing. Locally we often don't think about the difference, sort of like how people in Texas often mix Spanish in with their English without bothering to italicize it.

Here are some pictures I took from one of my kid's picture books written in ウチナー口. You'll notice that hiragana is used normally, with katakana only being the onomatopoeia type words. Very often we use small character sizes to represent certain characteristics of pronunciation, but this is not an easy thing to do when typing (like here) because I don't know how to input, for example, a small わ (but a small い like ぃ is normal). Also notice that there is a word starting with ん here, which isn't entirely accurate to the way the word really sounds, but again -- people mostly just make do with kana. 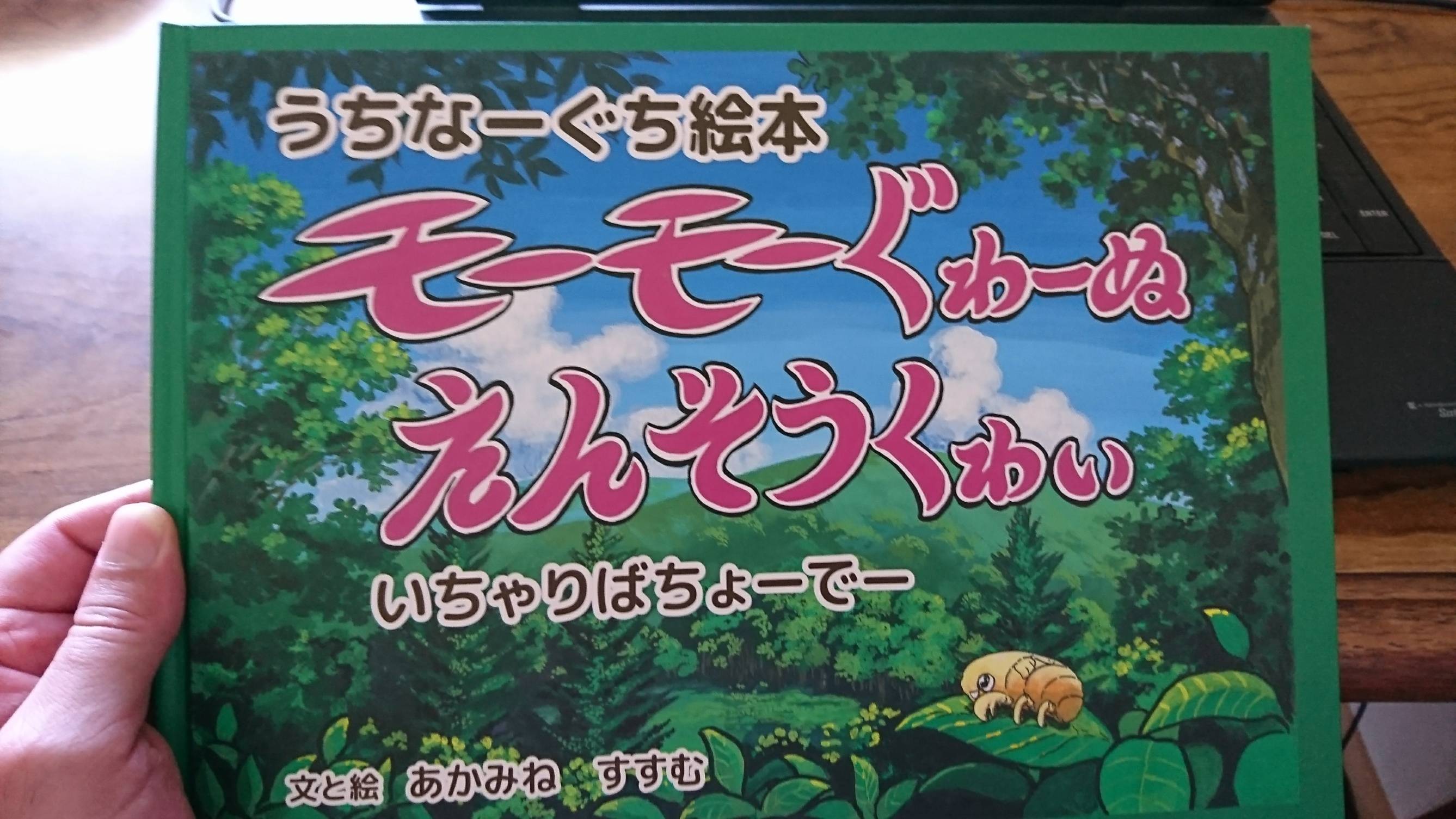 You'll notice that the story pages have an inset in Japanese in addition to the main text in ウチナー口. 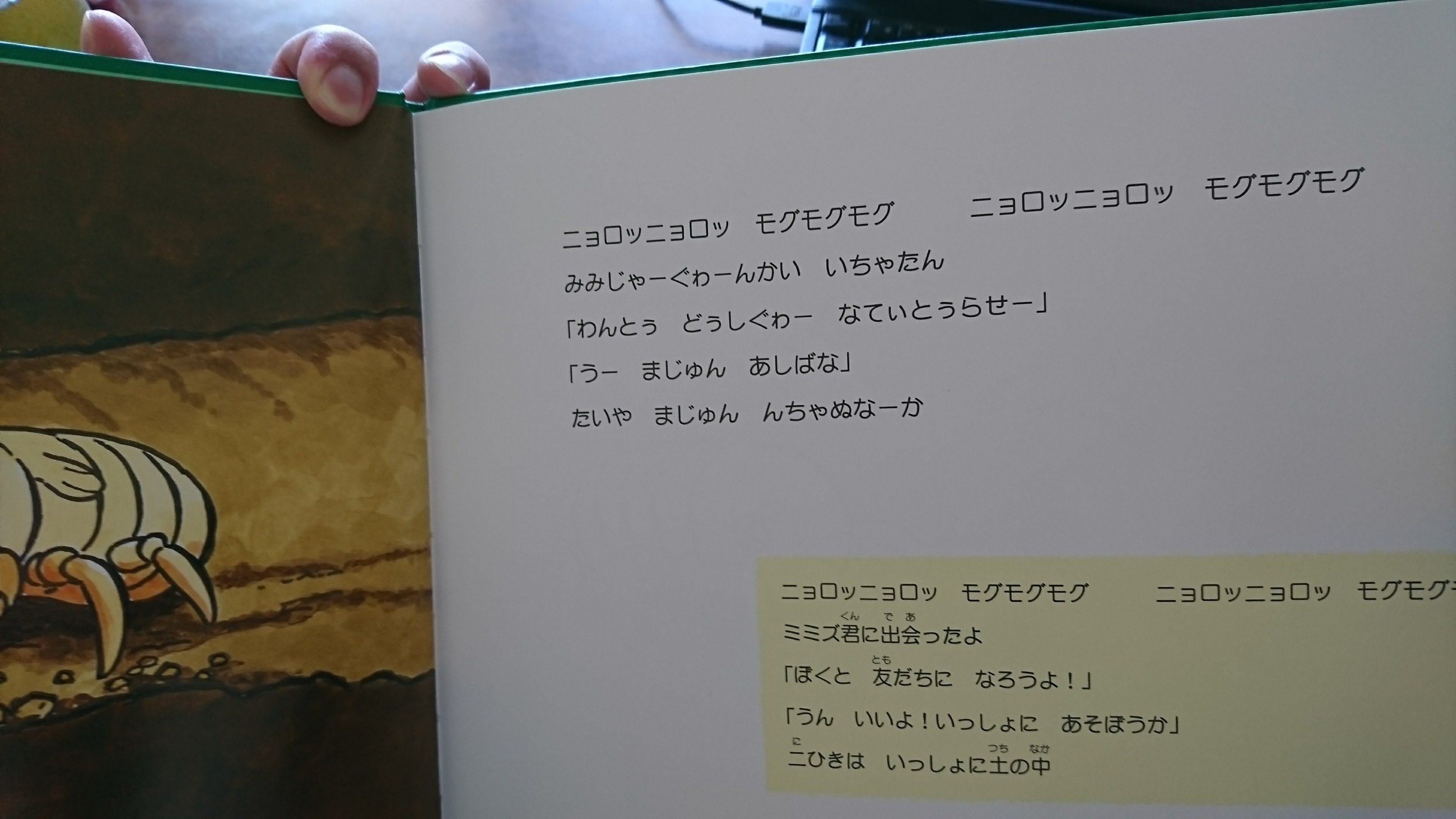 EDIT: After writing this answer the book was on the table and one of my kids read the title. I then realized that 「えんそうくゎぃ」 is a good example of a sound everyone knows to say correctly but we don't actually write with the correct letter. The first character, え should really be a (now very rarely used) ゑ which is one of the now "missing" two letters in the やゆよ line of kana, this one corresponding to a sound like "ye". In daily life we only ever see this character in katakana for the beer brand ヱビス. This letter and sound is not specific to Ryukyu languages, it has mostly fallen out of use in most of Japanese as well (ヱビス is produced by Sapporo -- about as far from Okinawa as possible).

As a weird side note, older Okinawans often pronounce "English"/「えいご」 as 「ゑいご」 out of habit.

This is a decent English-language description:

6
Can hiragana & katakana "spell" the sounds of all Japonic, etc. topolects?
3
Phonetic Mapping of the Hiragana System Used in the Okinawan Omoro Sōshi

22
Who decides what katakana will be used to form English loan words?
8
Why does this store named サァラ have a small ァ in the name?
2
For furigana, can katakana be used instead of hiragana?
15
How has Japanese kanji and kana usage changed since 1945?
2
Can an English video game be translated into Japanese without kanji?
3
How to distinguish between different types of katakana words?
10
Attempts to distinguish English "L" and "R" sounds using (extended) katakana
9
Why are Japanese fonts different to Chinese?
1
Why Can't A Name Be Written Literally In Japanese?
0
How to know whether a word is borrowed from foreign languages?