What is they history of this type of transformation?

This is a general rule, and a historical change. This question is accounted by historical development and dialectal difference.

Let's see some Classical Japanese conjugations and their Modern reflections:

Classical adjectives had three distinct forms: 終止形 ("I am happy"), 連体形 ("happy man") and 連用形 ("play happily"), among which 終止形 was eventually replaced by 連体形, resulting in today's dictionary form that serves for both functions.

Meanwhile, there was a sound change that eliminated consonant //k// and //g// in the middle of word (lenition). In Western dialects (e.g. Kyoto or Osaka) this effect was active when the following consonant is //-i// and //-u//, while in Eastern dialects (e.g. Tokyo) it only happened when //-i//. As the result, たのしき became たのしい nation-wide, but たのしく only became たのしう in Western area, remaining unchanged in Eastern.

Next, there was another change that made diphthongs ended in //-u// to long vowels. Thus in Western dialects, verbs' 連用形 (i.e. adverbial form) have become:

So, in Modern context, ありがたく and ありがとう are Eastern and Western form of the same conjugation. As Modern Standard Japanese is based on a Eastern dialect in Tokyo, we only need ありがたく in theory. Why the form ありがとう appears in Standard Japanese?

That's because some courtly language was imported from Kyoto, where the palace was located until Meiji. Forms end with -う are basically only occur in very limited occasion, namely before ございます, which is the highest variation of keigo. The common greeting words like ありがとう or おはよう are originally followed by ございます too, but come to be used independently for brevity.

The dialect atlas by NINJAL, No. 139. Distribution of adverbial form of an adjective. Generally, blue-green area retains the consonant //k//, orange area without //k//. 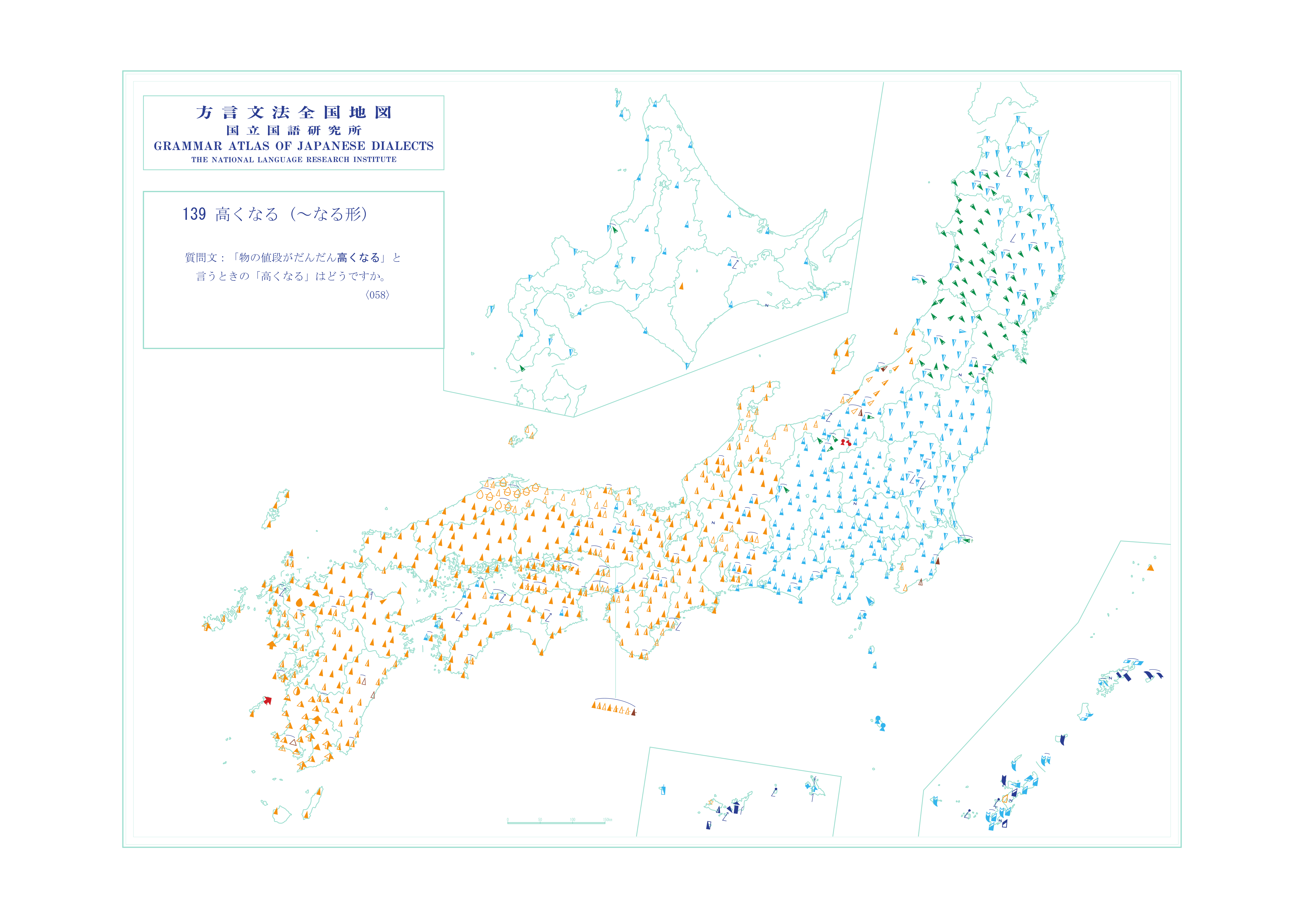 This is a kind of sound shift known in Japanese as 音便{おんびん}. The Japanese Wikipedia article has some good information, if you can read Japanese.

Historically, all the -i adjectives used to end in -ki for the attributive form (the form used when directly modifying a noun), and end in -ku for the adverbial form. "Good dog" would thus be よきいぬ, and "well done" would thus be よくした. In the Heian period, adjectives underwent two kinds of 音便{おんびん}, so-called イ音便{おんびん} and ウ音便{おんびん}, where adjectives lost the //k// sound in the attributive and adverbial forms, resulting in よいいぬ and ようした.

This sound change is historical and regular, both the disappearance of the //k// in adjective forms, and the shift from //au// to //oː//. The vowel shift also occurred in verbs, particularly in the volitional or presumptive form. This was originally -amu for 四段{よだん}活用{かつよう} or "quadrigrade verbs", composed of -a as the 未然形{みぜんけい} or incomplete form of the verb stem + -mu as the auxiliary verb ending expressing the presumptive or volitional. This -amu later lost its //m//, becoming -au, and this then underwent the regular vowel shift to -ō.

Not the answer you're looking for? Browse other questions tagged etymology morphology or ask your own question.