What is the character etymology of 着 ?

着 as in [着る]{きる}. I have tried looking up the kanji at Richard Sear's Chinese Etymology site, Wictionary and other sites. Every one of them points to a variant, 著 but offer no explanation as to why it means wear and write at the same time ?

Primitive pictograph 着著. From bamboo 艹竹 and words 曰 and remnant of bamboo scroll threaded together. Original meaning to write.

This character, 着, is the simplified and variant traditional form of 著

All I know is that the top part of the kanji is grass radical according to wictionary and rest of the part is a phonetic.

Why does the same Kanji mean wear and write ? Where can I find more information about how the kanji evolved to mean seemingly unrelated things ? Why Japanese only took the meaning related to wearing something and dropped the meaning which means to write?

The "wear" and "write" definitions of 著 are in fact different words (and we don't use the kanji for "wear" anymore). Moreover, as you said, the true old form has the Bamboo radical on the head, in other words, is today's 箸. The kanji is made of 竹 and 者, where 者 indicates the pronunciation. Thus this kanji once became a carpool of several similar-sounding words.

Note that the distinction of 著 and 着 is tradition in Japan and PRC. Taiwan only recognizes 著 as the proper form for both.

着 was originally handwriting variant of 著. The top part 䒑 was a common variation of 艹 (くさかんむり; radical Grass on the top) now becomes non-standard. 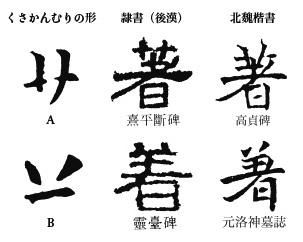 To follow on what JACKB has noted and linked to in the comments, 着 and older form (not a variant, more like original form) 著 both express ideas of "something (possibly flat) coming to rest on something else flat". Writing is "at rest on something flat", from one perspective, and so is clothing.

Not the answer you're looking for? Browse other questions tagged kanji verbs etymology or ask your own question.

18
Etymology of 出来る dekiru
5
Why is the Japanese government considering adding kanji such as "cancer" to the jinmeiyō kanji?
8
What is the origin of the word 無{な}し?
2
Radicals: がしら (gashira) endings?
5
What is the character etymology of 風?
0
Question about kanji 分?
1
What are the nuances between the use of 訊く instead of 聞く in the following sentence?
2
How to determine the meaning of a Kanji?
1
先生 character etymology