I am struggling with the writing in the picture below: 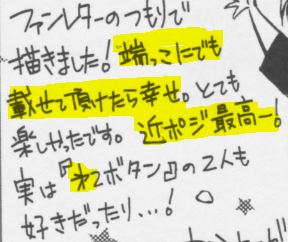 How does 端っこ fit in this sentence? "I would have even been happy with publishing/participating just on the edge"? That sounds weird.

And 近ポジ I understand as "close-range" (or something similar) - but that doesn't really make much sense here, does it?

and finally: what's the character before 2 button? From the context I would have expected this character: 第 - is it a short-form?

Context: The only other thing written on that page is "Congratulations on 10 years of serialisation" - it's from an anthology of manga shorts celebrating a certain manga series. The "2 button" is referencing another work by the same mangaka.

The more Japanese I read, the less I feel I know. sigh

As always, help is very much appreciated. :)

This 端っこ refers to a corner of the book, implying inconspicuous and unimportant position. Basically she's being humble and saying her work does not have to be placed in an important position on the book.

As for 近ポジ, I think it probably means 近いポジション (near position) or 近のポジション (position of 近) where 近 is a certain character in the manga. I'm not sure what it actually means, but possible interpretations are:

And yes, the character before 2ボタン is a common variation of 第 based on the cursive script of this character. It's described here.

「っこ/こ」 is what I call a "cutifying suffix" that makes the preceding word look and sound cute. It does not change the meaning of the word.

Though we do not have a whole lot of context or background story here, I would imagine that the sentence means something like:

"I would be happy if you could use (my/this illustration) on the edge of a page somewhere in your work."

Only you would know if that sounds alright in the larger context.

「近ポジ」＝「近ポジション」 as you said, but again, I could only guess the meaning of the phrase it appears in for a lack of context. Japanese is an even more contextual language than people would like to believe. My best guess would be something like:

"It would be even better if you used (the illustration) closer to the center (of the page) (rather than on the 端っこ)."

I am someone who does not read manga or play games, so I could be totally off here. Again, only the one who has the whole context (= you) would know if that interpretation sounded right.

The former is the nonstandard form of the latter. It is quite often used in informal hand-writing by native speakers as it is a time-saver.

Not the answer you're looking for? Browse other questions tagged meaning readings handwriting reading-comprehension or ask your own question.

1
What's this handwritten character?
0
"Unfindable" character in song
3
What is the meaning of the character in this picture?
4
How to understand the last character 枚 in 福田熊治良枚
6
How can 池仲 be read as 'ikenohata' in the seal 'Ō Ikenohata Jōkin', 大池仲上金? Doesn't 仲 = 'naka'; can it be 'hata'?
2
Help identifying a Kanji character from image
1
Need help reading hand-written character from comic
5
"No, your taste is (not) good"
1
A confusing line for me (picture)
0
What's the second character?