Does a small tsu double all consonants?

In several sources it's mentioned that a SMALL TSU doubles consonants. My problem is, some websites give almost identical examples with:

But what about the others?:

When I use some online converter (Kana>Romaji), they double all of them.

So, does a SMALL TSU double all consonants or not? And if not, in which cases?

A small tsu (sokuon) geminates (doubles) the following consonant. In native vocabulary, only unvoiced consonants can be geminated. This includes the さ, た, か, and ぱ rows. A double n as in おんな is not really pronounced the same way as ＊おっな would be if it were a word.

In loanwords that require gemination of other consonants, N tends to use ン, M uses ン or ム, W uses ウ, and others use the -u form of their row. Some examples are:

Some loanwords do use the sokuon where native words would not, such as:

The important thing is that these are all loanwords. You generally won't see such examples written in hiragana, though the sokuon is used the same way in either writing system.

You may also see the small tsu at the end of a word or sentence. There it represents a glottal stop, an abrupt ending.

Tom Kelly's response is downvoted, but is actually more correct than any other phonologically speaking, but still not the entire story so I'll elaborate on it and will show an audio analysis comparing it with true gemination so that the difference be visible.

The sokuon in Japanese maps to what Japanese speakers perceive as a coherent atomic unit of sound [phoneme] which is probably why it is written with a single symbol — the Japanese do not consider it merely an orthographical quirk but an actual consonant of Japanese. Such a phoneme is called an archiphoneme, a rare type of phoneme that lacks a consistent underlying place and method of articulation. That is to say that Japanese speakers perceive it as it's own consonant, but it has no meaningful way to be pronounced in isolation. /k/ as in the start of “coal” is a phoneme in English, but English speakers can pronounce it in isolation on command. Archiphonemes are indeed quite rare in languages, and English lacks them entirely. This phoneme is conventionally denoted as /Q/ with a capital letter as conventional for denoting Archiphonemes.

Like most archiphonemes, the distribution of this phoneme is very limited; within the Tokyo standard dialect it can only occur after a vowel, and before any of /t, p, k, s/. This phoneme however must still be realized in some way and make a difference in pronunciation; this is where archiphonemes become interesting, because they are typically realized by their effect on surrounding phonemes, which is why their distribution is so limited.

Now, it is often said that /Q/ is realized by geminating the following consonant. This is only arguably true in the case of /s/ where for a fricative “geminating” is a very abstract term since fricatives can be held indefinitely unlike plosives; when /Q/ is followed by /s/ it is indeed realized simply by holding /s/ for the length of an extra mora.

The sequences of /Qt, Qp, Qk/ are not realized in Japanese by geminating the following consonant; this is something that is repeated very often in lay literature and even some specialized literature but is absolutely false and I'll show why. It is realized by a mora of silence in this case; this also maps onto the perception of /Q/ by Japanese speakers who often claim to perceive it as an empty phoneme of silence for a mora. This goes back it being a consonant; it is effectively “a consonant of silence”.

Onto the audio analysis comparison: 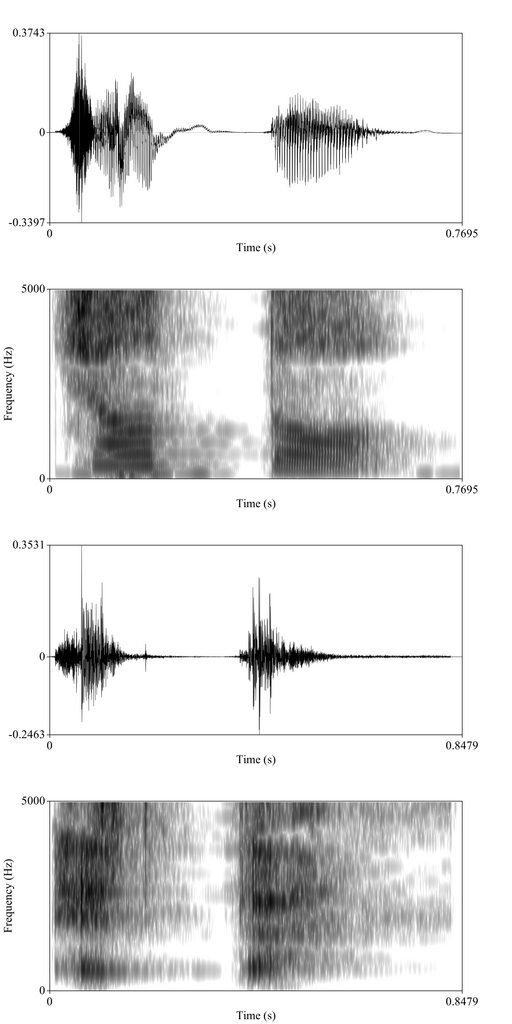 It is obvious that in “että”, there is a small amplitude spike before the “tä” that is lacking in “ちょっと”, but that is not all, in the spectrogram there is also a small thin dark vertical line in the same place that is indicative of a plosive sound. There is no doubt that in Finnish there truly are two plosives, in this case two [t] sounds that occur in succession as you will also find in Arabic, Latin, or any other language with true consonant gemination.

This is missing in Japanese, there is nothing, no fricative, no vowel, no plosive, there is simply a mora of relative silence before the /t/, which does show the characteristic dark, then vertical band. You can verify yourself that this is reproducible with any Japanese word that features /Qt, Qp, Qk/ — the /Q/ archiphoneme, commonly called the “moraic obstruent” if you wish to learn more about it, is not realized in Japanese by doubling plosives, this is a myth that is very common, even in some specialized literature.

Now, onto the /Qs/ combination however for completeness' sake: 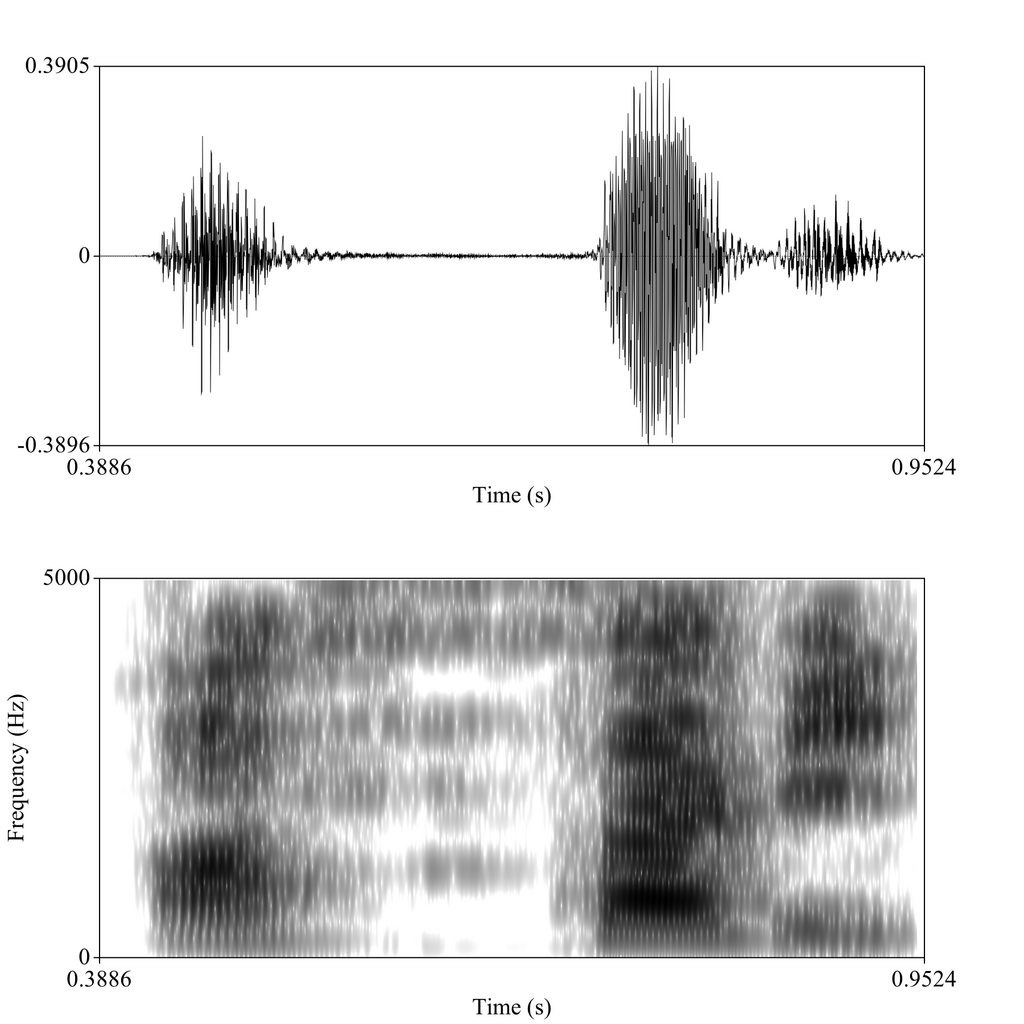 This is SPCyan's pronunciation from here.

As you can see, there is no silence here; the pattern on the spectrogram shows that the fricative in /aQsari/ is simply stretched and forms one long pattern on a spectogram that is consistent with a fricative. Nevertheless, it is also visible that it's a less loud and dense fricative than from where the real /s/ starts and more frequencies become filled in, so that's an interesting thing.

But at the end of the day, despite <っ> being conventionally romanized as a doubled consonant it “doubles” no consonant; it's realized as a moral of silence before /k, p, t/ and it only stretches /s/ — it cannot occur in the standard dialect before any other sound but in some dialects it can occur more freely where the realization becomes even more varied.

P.S.: more I incidentally lately came across a a piece of research which investigates the perception of /Qs/ by Japanese native speakers and concludes that they have a hard time differentiating the normal realization from a true mora of silence, which provides evidence that to Japanese speakers, the underlying form is indeed a mora of silence, not a gemination.

For one thing, [v] is not a legitimate consonant in native Japanese. You may see it used in loanwords, but the pronunciation varies between speakers; some native speakers, especially younger generations, pronounce it as a [v], but some people still pronounce it as a [b], which is what has historically been used in Japanese to approximate a [v] sound. So it falls into the same category as [b].

For M, っ is not used; instead a ん is used preceding it; so "hammer" is written as ハンマー, not *ハッマー. This is also the case for N. As for W, there are no native words (that I'm aware of) that use a geminate [w] sound, and I actually can't think of a word in any language that would end up being transcribed in such a way that you would need to, but I suppose it wouldn't be incorrect to use a っ with it.

The small つ (written as っ) is used to represent a very brief pause before the next consonant. These occur in the readings of Kanji and in hiragana grammatical conjugations. This is Romanised as a double consonant and used to represent them (with ッ) in foreign words. The reason that つ is used is that "tsu" sounds are often replaced with pauses in compound words. This is similar to the voicing of second Kanji in compound words (such as [川]{river} being read as かわ or がわ in different words).

For example, use in grammatical conjugations:

I bought the Apple

Use in Kanji readings:

This pause is also used for sudden stops in conversational speech:

Since the sound following depends on the next Kanji, not they one preceding it, the っ could occur before any sound that occurs native in Japanese (including voiced consonants G, Z, J and yoon syllables). However, notice that Fa, Fi, Fe, C, V, and Wi do not occur natively in Japanese and are only used in foreign names (or very recent loanwords).

Note that while っ is romanised as a double consonant, it is often not pronounced this way, although the following consonant may be stressed. See this answer for more details.

2
In だったっけ, why is the second "っ"(tsu) used when it can't be connected to "け"(ke)?
0
Difference in Katakana Characters

6
Does the ー represent a double vowel or a long vowel sound?
3
Does an international OR standardized phonetic alphabet/notation system exist to depict all the Hiragana/Katakana sounds?
8
Why does this store named サァラ have a small ァ in the name?
2
Are hiragana letters written with their small nuances?
3
Positioning of small kana in compound kana
1
Does Japanese have characters in small size and in capital size?
2
Patterns across Hiragana consonants?