Can one say なそうです instead of だそうです when expressing hearsay?

At first, I thought the answer was simply that you can only use だそうです (because that's all I have ever seen), but today I read the entry for そう in the Handbook of Japanese Grammar (1940s) by Henderson (PDF via arxiv.org) and was surprised to see that the author listed both きれいなそうです and きれいだそうです as ways of saying "They say (she) is beautiful." He went on to say that it would be unusual to hear such a soft sentence as "きれいなそうな" in Tokyo, at least used by men. He didn't elaborate much, however. This same book said that the word is often written as さう (I believe this is obsolete today) and mentioned that it is an abbreviation of さよう. 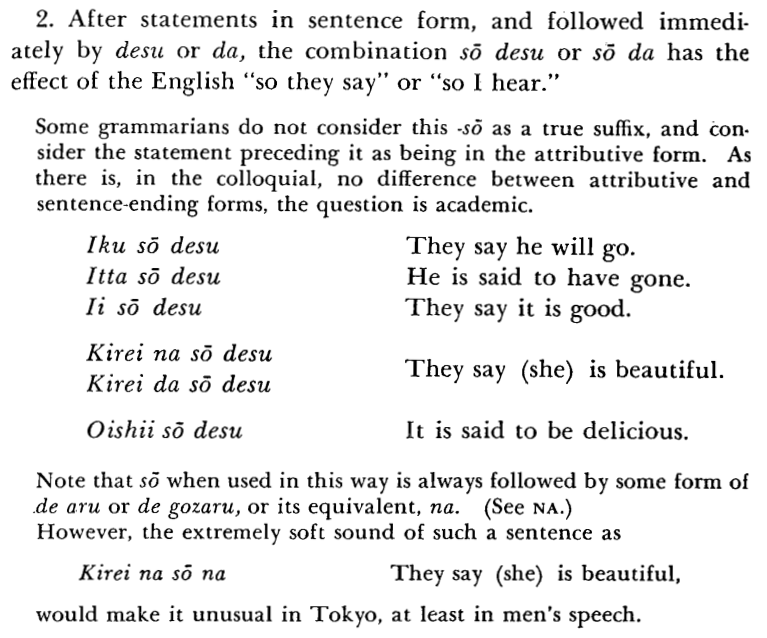 Is "きれいなそうです" correct, or perhaps an outdated usage of the form, or is the author mistaken? Could anyone shed some light on this?

As a native speaker, 綺麗なそうです, 静かなそうです, 下手なそうです etc. doesn't sound wrong and does sound softer. E.g. one could accuse some third party by saying 簡単だそうです, implying the third party is wrong. 簡単なそうです is harder to say in an accusational way IMO.

As to how often it's used, I'd say much less than だそうです. Whether it used to be more common before I don't know but 〜なそうな is used as a cliche when the language is intentionally being made archaic, like when old fairy tales are told (e.g. 日本昔話). I'm also not sure if the gender is a factor.

Not the answer you're looking for? Browse other questions tagged grammar copula or ask your own question.

7
Why use あんなに instead of こんなに when expressing one's memories?
6
Can one say "A decides that B will do X" with ことにする?
3
What does ～ましょう ～おうmean when you say it to no one
3
Expressing the concept of "instead"
1
How to say 'only' when there is only one of something
8
When can AはBです mean 'A has B'
1
When should I say 10年越しの夢 instead of 10年の夢?
2
When describing location can ある take more than one に?
1
Can one say [ゲームを遊ぶ ]?
3
Can I say "徹底対策" instead of "徹底した対策"?