Appending the み suffix refers to generating nouns from い-adjectives such as:

Of note is that process above generates み-nouns from い-adjectives as opposed to being generated from verbs, and is capable of generating み-nouns from words that do not have a related む-ending verb (I.e. there is no おもしろむ→おもしろみ).

However, many of the above seem to have a corresponding verb which, of particular note, contains a -m- sound which could be related to the み suffix generation rule above:

It then seems that these may be possible processes (taking one of the ~める verbs as an example):

In this hypothesis, the verb is the origin. Some unknown mechanism (1)(Verb to Adj) generates a い adjective, and another mechanism (2)(Verb to Noun) generates a み-noun. Following this, a relationship between the adjective and the noun develops (3)(Adj to Noun). Then, this new mechanism (3) is extended to adjectives that do not have a corresponding verb containing a -m- sound, which is mechanism (4).

Comparing mechanism (2) to the 終止形 to 連用形 conjugation rule, we note that it is also of a similar type, that is to say that it is a process that is "Verb to Noun". E.g. 笑う→笑い.

In another hypothesis, I take the adjective to be the starting point. Where after (1') it gets a む to become 深む (Which may be an old verb form. See: Rare/Obsolete verb forms and How do 自他 triplets of related verbs work?) and then goes on to conjugate normally to 連用形 to get the み ending. As above, the association between the adjective and noun (3') is formed and is extended (4') to adjectives that do not go through (1'): 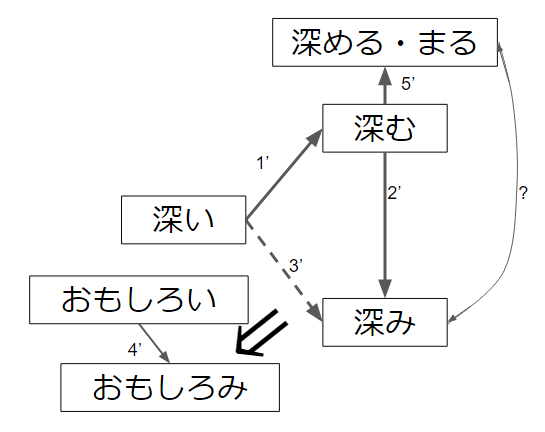 This gives me a suspicion that there might exist a verb-like む morpheme hidden in the history of the words that contemporarily do not have an explicit -m- sound in order for them to conjugate to a 連用形 containing み such that the processes A and B (right at the beginning of this question) are actually underlyingly the same process.

So restating the question, what is the path to take to get to 楽しみ? Is process A of the nature of (4) in the diagram?

I was recently looking into the etymology of the term 畏{かしこ}まる. Shogakukan's 国語大辞典 traces this to 畏{かしこ}む, and notes that only the 連用形{れんようけい} is found in the oldest textual appearances. The entry provides two ancient quotes, one from the 古事記{こじき} and one from the 日本書紀{にほんしょき}, both using the form かしこみて. It seems possible that this みて ending may represent a stage in the lexicalization of み, where み derived originally as a conjugated form of the む auxiliary verb, but み then developed uses that are independent of this origin.

む (from which み and also まる and める derive) expresses senses of appearance and seeming. I suspect there are two more possible (probable?) cognates here: suppositional む (source of the modern volitional -ō ending), and regular verb 見{み}る which some dictionaries list as cognate with 目{ま・め}.

A similar suffix is modern びる, as in terms like 古{ふる}びる and 大人{おとな}びる. This derives from classical ぶ. I suspect that this may be a shift from む, as a /m/ ⇔ /b/ shift does crop up here and there in Japanese (c.f. the Tama River in western Tokyo, the upper reaches of which are also called the Taba River; also Tōhoku-ben where たびに is rendered as たんびに; and classical verb 浴{あ}む that became modern 浴{あ}びる).

In modern Japanese, the む auxiliary verb has largely disappeared, been partially superseded by まる and める as verb-forming suffixes, and み as a noun-forming suffix. These all come from む, but they are now independent, so you might have a word that can be changed to take one of these endings, but it might not necessarily take the others -- such as 面白い, which can take み but not まる or める.

Looking at your diagrams, I must confess some confusion, so please comment if my post does not answer your question.

For many verbs, their 連用形 can become nouns. For example:

Not the answer you're looking for? Browse other questions tagged etymology conjugations suffixes or ask your own question.

7
Is ～がる suffix limited to specific adjectives only?
18
What is ~げに suffix actually?
5
Apparent inconsistency in turning い-adjectives into nouns: 赤い→赤 vs 近い→近く
7
Is たとえば the ば form of a verb?
4
Origin of -tai desiderative suffix
6
Occurrence of っ in verb stems
4
What's the grammar structure for “かな”?
3
Understanding the connection between adverbs and adjective negation