I was watching a cartoon that said something like:

I can only guess that オニ is the same as おに or 鬼 to which jedict says:

I'm still at a loss at how xxx's "ghost" could equate with - picking on or bulling though.

If I remember correctly the person on the cartoon was answered with:

In English, one can say "You liar!", "You bastard!" and so on, instead of saying "You are a liar." In Japanese, "にいにいのオニ!", "お母さんの嘘つき!", and such work exactly like these — to abuse someone — except that the second person pronouns (あなた, お前, 君, etc) are rarely used in such situations.

This オニ is indeed Oni, and expressions like this usually refer to someone who is unkind and merciless.

誰のオニ doesn't make sense to me. Maybe you have misheard something. 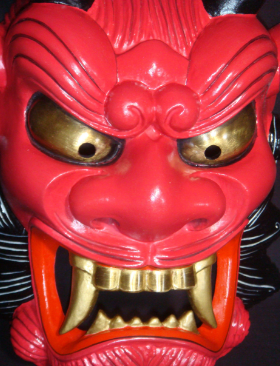 In this sentence,「の」means "is". It's not the possessive in this case. So「にいにいのオニ」can be interpreted as "Brother, You're a demon( orge-like person)!"

Not the answer you're looking for? Browse other questions tagged meaning particle-の or ask your own question.