I am trying to dissect a sentence from a manga page. I am a beginner in all aspects of Japanese, though grammar is my weakest point.

The licensed English translation of this page says "There's no paradise for you to escape to". I am having trouble getting to a meaning like this on my own.

Google translate is giving me "There is no paradise on the way I ran away."

The non bolded part I think I am okay with, it reads to me like "(something) such as paradise doesn't exist".

The bold part I am having trouble with. 逃げ出した looks like past tense to me (ran away) and 先に (previously) being there would make sense with a past tense verb. This doesn't really make a lot of sense to me in the context of the scene though. The girl wants him to take her away from a bad place/situation and he is showing her that coming with him will be even worse for her, as he is fated to be surrounded by death and fight for his life. I don't see why he would be talking in the past tense. I am probably making an obvious mistake here, but Google translate seems to going down the same path I am.

This is the original source, in case I have misrepresented it somehow. 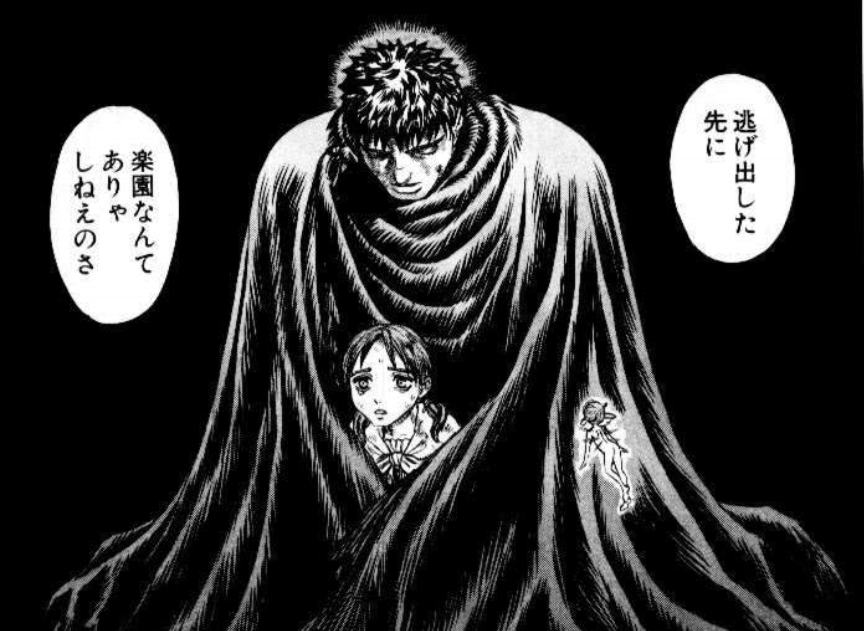 I believe the girl in the picture ran away from home?

literally here means "the place you ran away to", 先に can mean previously in certain situations, but in this situation it means something completely different.

If you look up 先 in a dictionary it corresponds to the following:

Also, I think he is saying this to her because he wants her to take on her challenges face on rather than running away.

Here is another example of the above usage:

I will leave the meaning of the above as a challenge for the reader.

I am not 100% sure but I think the past tense here is to indicate a counterfactual condition.

It is similar to English:
If you ran away, you would find no paradise, no matter where you go.

"If you ran away" is in the past tense because it is a counterfactual condition.
So it is impossible to run away, even if you could, you would have nowhere to go.

If you say it in the present tense 逃げ出す先に, it means that running away is possible.

Not the answer you're looking for? Browse other questions tagged translation meaning manga tense or ask your own question.