Can someone please help me determine why the kanji section of the Tokoboto dictionary entry for dekiru (できる) does not list a で entry by itself (with no trailing dot / nothing after the dot, and lists で.る instead) for 出, and why there is only a き.たる dictionary entry for 来 but no き.る entry.

As it stands, I am unable to build the できる sound from the kanji entries for 出来る in the dictionary.

Can someone please help me?

(Sorry for posting the following screenshot. Not sure how else to ask this question.)

UPDATE: I can roughly see how it is possible that the る suffix of the first kanji is dropped, but cannot figure out how the たる suffix in the second kanji changes to plain る. 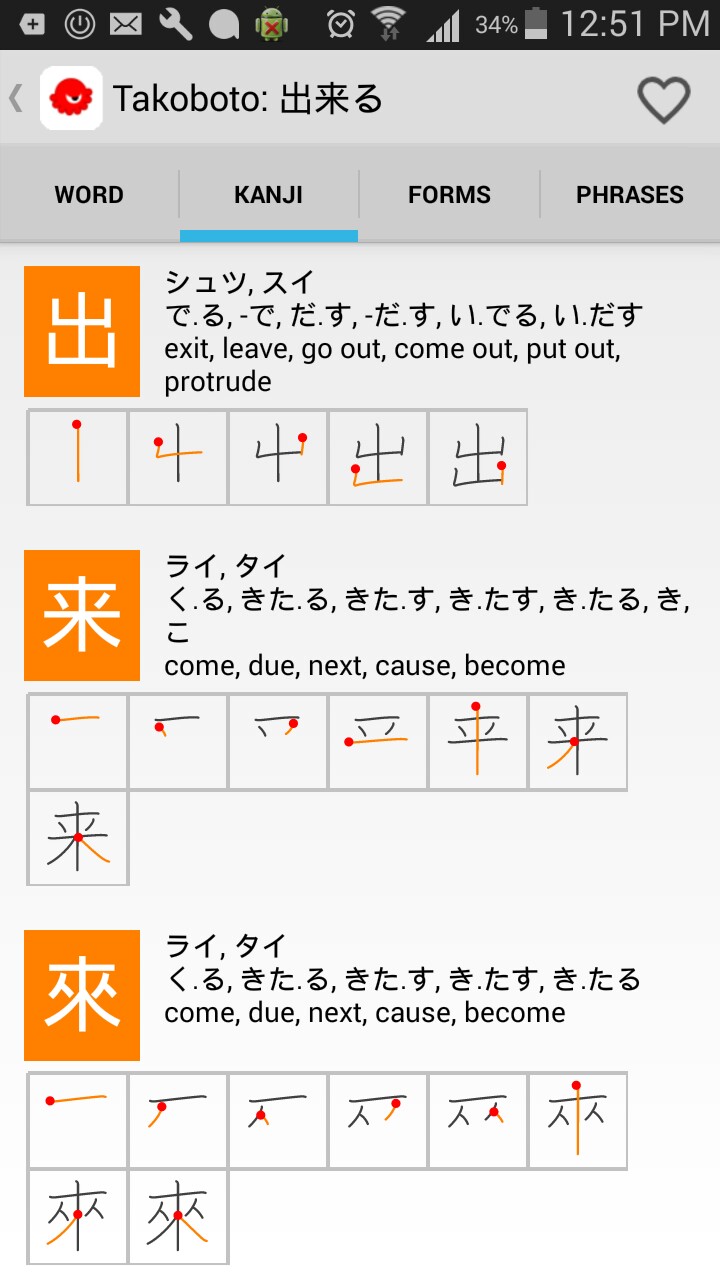 The exact pronunciation of a kanji depends on the word.
Different words that use the same kanji can have different pronunciations for that same kanji.
出 can be pronounced as だ or で or しゅつ or すい or い, or even maybe some other pronunciation that is not included in the list.

While this answer doesn't readily address the issue of で vs で.る until the end, I believe it is important that the OP approach the subject of kanji rather differently than s/he appears to be doing.

Languages are not designed for the ease of non-native speakers to learn. This can be all the more true when it comes to orthography. When coming from a Western language, particularly English, we bring our own set of biases about what a written language should look like (despite the fact that our spelling system is maddeningly inconsistent).

Written Japanese can seem overly complex with its different kanas and kanji. But as you learn to read the language, the conventions make more sense, and the exceptions almost fade into the background. It's a lot of hard work, and it can be agonizingly slow at the beginning. For example, once you've learned basic French or German grammar, you can pick up just about any book published in the last 200 years and read it. Not so with Japanese. Just consider the language as it is written today (as opposed to 50 years ago or even further back). The grammar, choice of vocabulary, and style of a newspaper is worlds different from a manga. Depending on how you're learning the language, neither of those two styles may resemble the language that you're being taught in the classroom.

My spoken Japanese is passable, but not fluent. However, I can read it decently enough, and near fluently in the areas of particular interest to me: history, culture, and Buddhism. I also have a bit of a scientific inclination. So, I taught myself to read a substantial portion of Japanese by picking up books on subjects I already a decent feel for and books on subjects that have a straight-forward internal logic: aerodynamics, paleontology, astronomy,... These are also subjects that largely circumvent the struggle of deciphering odd characters or words that turn out to be names of places and people. I've left learning to read literature to the classroom where there was a teacher to help grasp what was going on. Since on a professional level I have no need for Japanese and little time to devote to it anymore, my reading ability has plateaued.

All that is by way of background.

You can learn a great deal of Spanish, French, German, etc just by picking up a dictionary and memorizing words. You can do this to a degree with Japanese, but there isn't the close one-to-one correspondence between words and their meanings as there is in closely related languages. A kanji dictionary is its own wonderful bag of fun. (And, I don't mean that facetiously.) Yet, you have to understand what the purpose of a kanji dictionary is: to help the native speaker find the information they need to understand (1) how a character is used and read, (2) its development and historical usage, (3) a list of its more obscure meanings and readings, and a few other details. To this end, Japanese dictionaries for native speakers have developed a series of styles for presenting information about characters: for example, the use of a dot to indicate where okurigana generally starts (I say "generally" since some authors like to flaunt the rules), the use of kana to indicate the origins of various pronunciations (on'yomi vs kun'yomi is just the coarsest distinction to be made, much finer distinctions can be made regarding the periods a particular pronunciation was adopted), and then depending on the dictionary, bold fonts for standardized pronunciations such as with Joyokanji vs historical pronunciations that still linger. And much, much more. It can be very instructive to pick up a kanji dictionary written for native speakers and read the prologue where many of these conventions are explained in detail. It can also be helpful to look at kanji dictionaries designed for elementary and middle school kids

The ap you seem to be using is obviously designed for non-native speakers. Nevertheless, it is adapting quite a few of the standard approaches used for native speakers. Why? Because it's a great system and, for the most part, works very well. But, it can be very frustrating to try to learn to read Japanese by starting with a kanji dictionary. These dictionaries should be treated as guides to help you decipher what you see on the page; they are not definitive rulebooks that proscribe the only possibilities to read the characters. It is very easy to pick up a newspaper or a novel and find all sorts of examples of readings of characters that at face-value seem to flaunt what the dictionary has to say.

If you're trying to learn a large number of kanji, I wouldn't try to do it by reading a newspaper or literature. Why? In a newspaper, there's a rather specialized grammar, lots of place names and names of individuals (none of which follow any kind of logic from a beginner's perspective, and sometimes not at all from anyone's perspective),... trying to read a newspaper for a beginning, in my opinion, is a great way to get frustrated with the language and give up. I wouldn't start with literature because there you may encounter a whole range of oddities: unconvential uses of characters, historical spellings, non-standard grammars (such as when characters speak in dialect),....

I speak from personal experience here.

But if you pick up a book on a subject that is described and presented in an objective manner, then you can delve in and learn a lot---an awful lot. The book can be taken from the sciences: botany, physics, mathematics,... The book can be about hobbies: origami, tea ceremony, making paper airplanes, gardening,.... You'll be learning a lot of specialize vocabulary, but the grammar will be very consistent and tend to resemble very closely what you would learn in a Japanese language class. The kanji will tend to be very standardized and conform to what you see in a dictionary: there will be exceptions, but since the exceptions will be occurring within a fairly regular context, they'll be easier to catch, less frustrating, and easier to learn.

When I started learning to read Japanese, I dove into Mishima Yukio, Natsume Soseki, Rohan Koda, and Tanizaki.... OMG. I was way over my head, and it got very frustrating. I wish someone had just said, "Try reading this book about dinosaurs. You'll enjoy it and you won't have to deal with obscure words, expressions, uses of kanji, blah, blah, blah."

Japanese love the sorts of books I'm describing. Many of them are very well written but at a level for the amateur enthusiast and not the specialist. If you read from cover to cover, some of the best of these books will presume you don't want to have to cart along a dictionary: so odd uses of kanji will be accompanied by furigana, at the first occurences of specialized vocabulary there will often be explanations (this can be very true for books aimed at people who want to learn something about Japanese arts of ikebana and tea ceremony where even obscure or unfamiliar historical figures and place names will often offer furigana upon first encounter---sorry, not all such historical names).

So, back to your questions.

If you understand Japanese grammar, how a kanji dictionary is structured, and why it's organized as it is, you should be able to see why there's no need for で to show up as a separate reading. To someone familiar with the language and its grammar, such a reading will be apparent from the entry で.る

First, the following five words are all different words with related but different meanings. Dictionaries should have separate entries for each words.

Next, the reading of a Japanese word is not always predictive from its appearance (which is also true for many English words, by the way). 来る is never read as きる when used as a standalone verb, but the word 出来る is read as できる, not でくる, for whatever reason. You have to memorize the reading on a word-by-word basis. The "KANJI" section of that app seems to list only the typical possible readings, and I think it's a reasonable decision. It would not be fruitful to memorize all the possible reading of a kanji without understanding how it's used in a word.

A few two- or three-kanji words have completely irrelevant readings, which is known as 熟字訓. See: Where does the な in 大人 (otona) come from?

This is useful in two situations: (1) when you don't know which syllables of a word to attach to the kanji as okurigana (for example, 渡す is correct but *渡たす is not), or (2) when you wish to produce kundoku readings for kanbun (so that you, the classicist, can read 士渡海 as 士が海を渡る).

The kun readings are not meant to be an exhaustive list of all the ways the kanji can be used outside of on readings. This would get confusing fast, for example, ateji.

4
kanji composition question -- why these radicals for 出?
4
Dictionary entry legend
1
Dictionary definition of multiple words with identical pronunciation but different kanji
9
What is the meaning of dots and dashes in kunyomi readings?
2
Difference between おかあさん and ははおや
1
How to read kanji entry from Takoboto dictionary
1
Reading per kanji / irregular readings
1
Any help recognising a handwritten kanji?
3
Why 梱入 does not appear in any dictionary?
1
Is び the reading for a productive suffix 〜日?