How to read kanji entry from Takoboto dictionary

When looking up the kanji occurring as the first character in the word すき (好き), I can see the following: 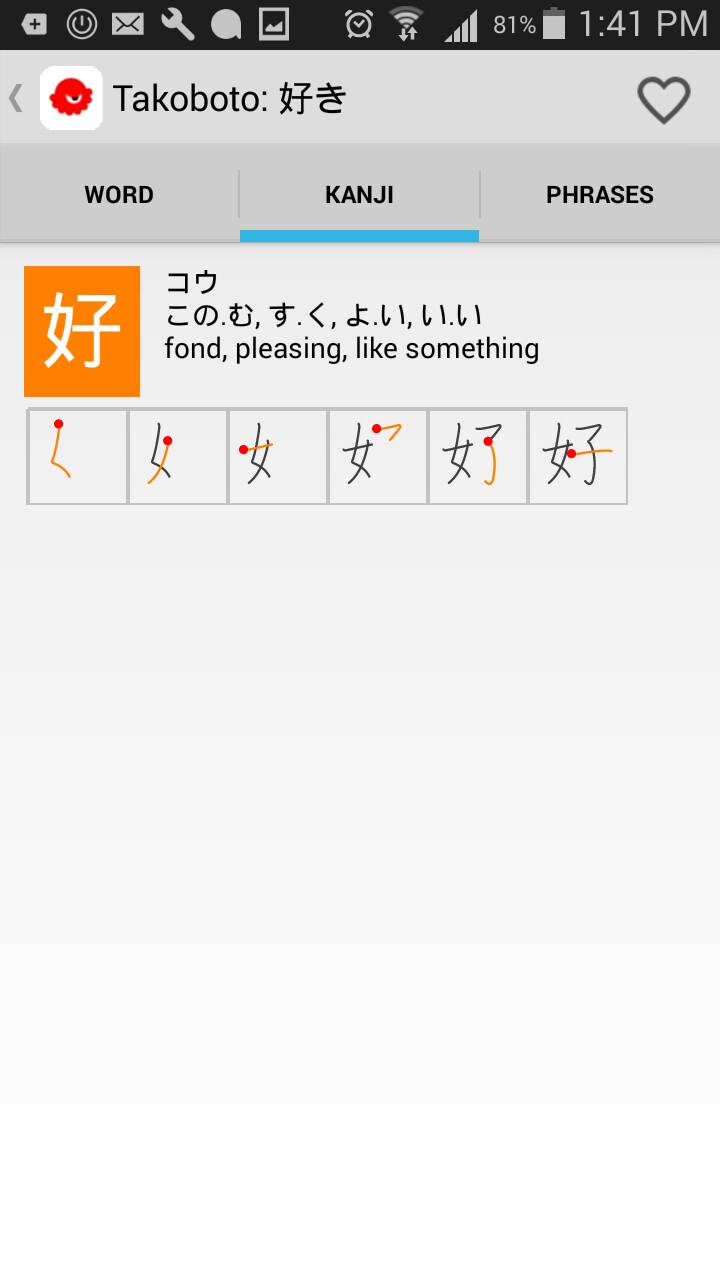 I know quite a bit of Chinese, and am trying to make the best out of this kanji section of my dictionary.

Can someone please explain the difference between the kana line above (first line) and the kana line below (second line) in this entry, as well as what all those commas and dots mean, and whether the order of characters between those dots and commas bears any significance or is random?

Thank you for helping me read kana entries from my kanji dictionary.

The first thing you need to be able to do is distinguish between katakana and hiragana.

In most dictionaries, it is rather standard to use katakana to show the on'yomi (or, Chinese derived pronunciation) of the character. Hiragana is used to show the kun'yomi (native Japanese pronunciation). Characters can have multiple on'yomi and multiple kun'yomi; it all depends on the history of the character and its usage. While one can formulate some general rules of usage, it's mostly through context and familiarity that you'll understand which pronunciation is used or expected---and, then there are odd-ball cases where all rules fly out the window.

The コウ that you see there is the on'yomi for 好, which is the pronunciation used in many, but not all, compounds (it depends on the character). So, in 好機, you'll use the on'yomi to get こうき. Or in 好奇心 to read this as こうきしん. Not all characters have an on'yomi, but most do.

In the hiragana reading, the period marks where the okurigana should begin (I say should because it can depend on who and when something was published different rules may apply). Okurigana are ideally aide the reader in determining not only the inflection (such as for verbs) but distinguishing when which kun'yomi is intended. For example:

There are some words where you have to guess completely by context, e.g. 行く has amongs other readings the kun'yomi い.く and おこな.う which would be ok but the past tenses are いった and おこなった respectively, both written usually as 行った.

So while 大阪で行{おこな}った大会 obviously means tournament that took place in Osaka and not tournament, that walked in Osaka 大阪に行{い}った人 is a person that went to Osaka。

I think the first line is the basic reading of the kanji by itself.

9
Significance of the kanji 茶 in the set phrase 滅茶滅茶{めちゃめちゃ} / 目茶目茶{めちゃめちゃ}
12
How do I look up this kanji?
4
Dictionary entry legend
1
Dictionary definition of multiple words with identical pronunciation but different kanji
3
How to find alternative writings of a kanji in electronic form?
1
Understanding kanji: kanji sound boundaries?
0
出来る{できる}: kun'yomi from Takoboto dictionary do not correspond
1
question about the use of に to mark location in this dictionary entry
7
How to read this sign and what it means?