I know several Chinese characters but am a relative beginner at Japanese.

I am having trouble, in a dictionary, when I input a sequence of characters, determining where the letters for one set of syllables are absorbed by one kanji and which ones are absorbed by the others. For example, take the word "ukemi" (rear): 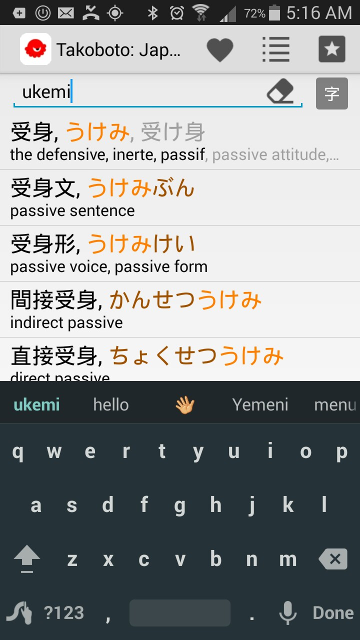 How do I know which of the following hooks true:

How can I tell, from the dictionary, especially from this single dictionary entry, which one of these substitutions holds?

Also, how do I know whether these representations are ON'YOMI or KUN'YOMI? Do some "(kun/on)yomi" have both long and abbreviated forms or something?

Unless you're in a situation involving jukuji-kun readings (where the characters are wholly disconnected from their pronunciation), you can tell by knowing the readings of the individual characters:

受: う・ける (among others), keeping in mind that it's an ichidan verb so the verb stem is うけ-, not う-

So, if you know even that 身 is み, you then know that 受+身 can't be う+けみ. (Also, adding kana in front of kanji is basically unheard of in Japanese outside of the お- honorific, so if you see both 受け身 and 受身, you can be sure the け is part of the left side, not the right.)

You can't know from a single dictionary entry. But you can know from the entry for the word and then the entries for its component kanji (again, excepting jukuji-kun readings, where there's no connection between the two at all). You'll be able to tell on'yomi versus kun'yomi in the individual kanji's entries.

Not the answer you're looking for? Browse other questions tagged kanji dictionary kanji-choice or ask your own question.

16
Why can some words be written with or without okurigana? How do the uses differ?

5
How many possible phonological forms could be represented by a randomly chosen single character?
3
How to find alternative writings of a kanji in electronic form?
10
Variations in the “same” kanji, how do you know which one to use?
4
Rules and phenomena about reading/writing words with kanji
2
What happened to original, pre-Kanji, Japanese words?
1
What is the usage of these 12 kanjis (彁, 墸,壥,挧,暃,椦,槞,蟐,袮,閠,駲,妛)+18 more in modern Japanese? How to read it?
2
Reading per kanji / irregular readings
9
What is the correct reading of 火防女?
1
Different kanji variations for the same word with same readings but different meanings