How do you say "glow-in-the-dark" in Japanese?

Specifically, I am referring to substances that absorb light and then emit the light back in a way that is visible when you remove all other light sources.

I am not referring to substances that rely on a one-time-use chemical reaction such as glow sticks, or substances such as fluorescent highlighters or black light posters that rely on a separate catalyst like a "black light" to create the glow effect. (While I wouldn't mind knowing how to describe these too, they are not the primary subject of the question.)

Examples of what I would like to be able to describe: 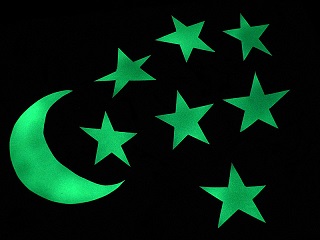 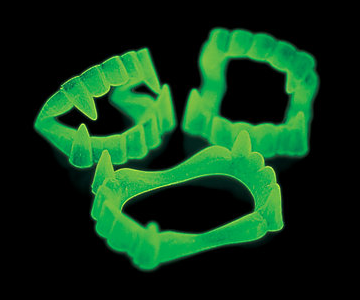 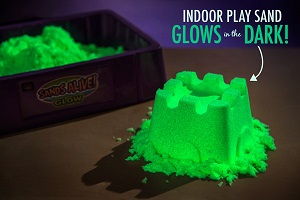 Note that in the third reference image there is text describing the product that reads: "Glows in the Dark". This is a literal explanation of what the product does, but I think the term "glow-in-the-dark" as an adjective is more useful, as it can be placed before any noun to explain that the subject in question has glowing properties. Whether this has any relevance regarding how this could be explained in Japanese, I don't know - but I think it's worth mentioning because a term that can be used to describe any object is most handy.

If it is referring to material in this page, then 夜光(素材) or 蓄光(素材). If you google with 夜光, then you will see what you put in the question. Depending on the material, such as powder, paper, particle, the (素材) part can be changed.

Also this page explains the difference between 夜光 vs 蛍光 (fluorescent) in Japanese. So you could probably dig in more about 夜光/蓄光 to verify if the word is what you're actually looking for.

I know quite a lot about jigsaw puzzles, and one quite popular type is exactly as you describe: it is luminescent, meaning that the dyes absorb light, which they store and re-emit later. These are almost universally labelled as 光る{ひかる}パズル. These I have been rendering as "Glow-in-the-dark", exactly as you say. Here's an example page of these puzzles from Tenyo: http://www.tenyo.co.jp/jigsaw/catalog/t_light_list.html

Not the answer you're looking for? Browse other questions tagged translation adjectives or ask your own question.

9
How to say “To start liking something”
3
With context that it is getting dark, why say “日が暮れる” instead of just “暮れる”?
4
How would you say “x is exhausting/tiring”?
4
How to say “the day after the day after tomorrow”
0
How to say 'I want to be red' in Japanese?
1
光の差さぬ暗い影 vaguely understanding this line