To what extent, if any, was meifumadō an element of Japanese Buddhism or culture?

In the famous manga of Lone Wolf and Cub (子連れ狼), the protagonist walks the path of meifumadō (冥府魔道), the road of hell, symbolized by the twin demons of the bull and the horse, in his quest for revenge.

To what extent, if any, was meifumadō an element of Japanese Buddhism or culture? Was this invented by the authors or is it a real philosophy?

Completely invented. Meifu and madō are both real words (meaning, roughly, "land of the dead" [= hell] and "way of evil", so not in conflict with the movie/manga) but I'd be surprised if it could be shown that anyone had put them together before that story.

The specific combination 冥府魔道 is almost certainly a coinage of the 子連れ狼's scriptwriter, 小池一夫. He said it himself on Twitter. It can be broken down to two words.

In summary, both 冥府 and 魔道 are concepts that has much relation to Japanese Buddhist culture, but the compound is somewhat creative, especially since 冥府 does not equal to so-called "hell" itself even in Buddhism. Although the idea putting them together indeed sounds catchy, it does not come from the technically correct Buddhist tradition.

I did some more research on this and apparently the mythology is pre-existing in Buddhism and is pretty well known. Here is a description from a Buddhism mythology web site:

Rasetsu 羅刹天
... Bishamonten, the god who protects all places where the Buddha preaches, is guardian of the north, and he is accompanied by two classes of demons called Yaksha and Rasetsu. The Beasts of Buddhist Hell are also known in Japan as "Gozu-Mezu" -- short for Gozu Rasetsu 牛頭羅刹 and Mezu Rasetsu 馬頭羅刹. With heads resembling those of ox / cows (Gozu 牛頭) and horses (Mezu 馬頭), they are said to torture and feed upon the flesh of the deceased (those who have committed sins and are thus in hell). The Rasetsu might be particularly monstrous Yaksha, or alternatively, the Yaksha might be Rasetsu who have pledged to serve the Deva as guardians of forests, villages, and towns. The iconography is unclear. 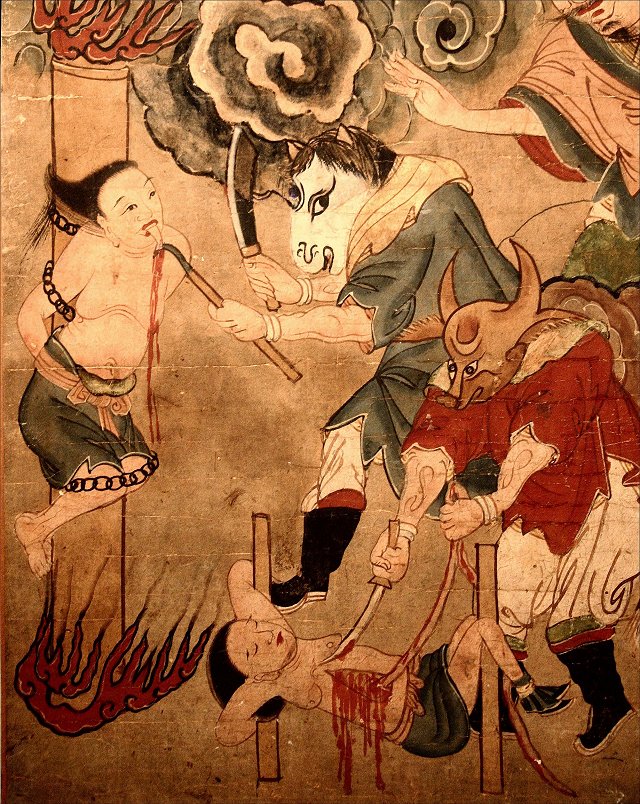 6
What was the origin for the term 水{みず}色{いろ} to be associated with youth, adolescence and puberty?
19
The significance of 前 {まえ} in Japanese language and culture
6
Are there any issues with sexism in the Japanese language?
10
What do Japanese signatures look like?
2
What are the equivalents of millionnaire, multimillionaire and billionaire in Japanese?
6
Does a bear sh*t in the woods? Rhetorical affirmations in Japanese. Is there any?
12
What are the stereotypical qualities of a gaijin trying to speak/write Japanese to a Japanese person?
15
In what unit is the length of Japanese texts measured?