Can an English video game be translated into Japanese without kanji?

I want to get my game translated from English to Japanese. Can it be done without the use of kanji (i.e. using only hiragana and katakana)?

Kanji characters seem that they will be too small to be readable at the size of the text in my mobile game. And it's a nightmare with fonts too. I want to know how it usually is in Japanese video games and if what I want can be done.

Thinking of i18n as an afterthought is always a nightmare :)

Well, the short answer is "yes, you can", but you need a very good reason to do so. Almost all modern games use both hiragana/katakana and kanji, unless the game is clearly targeted at kindergartners.

I recommend that you show your game to native Japanese speakers (hopefully gamers) and seek for their advice. Giving up kanji altogether is usually the last thing to do.

Absolutely. In fact, many (most?) old Japanese games are like that (because storing all the necessary kanji would take too much space I assume, and maybe they were concerned about the readability just like you), e.g. Phantasy Star: 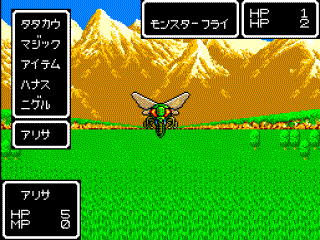 I don't know if it's a common practice in modern games though. Googling スマホゲーム (smartphone game) pictures I see plenty of kanji. Perhaps Japanese are better at reading small kanji then you might think.

Not the answer you're looking for? Browse other questions tagged kanji katakana hiragana video-games .

4
Is this 8px height font understandable for japanese knowing people?

29
Distinguishing certain characters in handwriting and print (Similar-looking Kana and Kanji)
8
Can Hiragana or Katakana stand alone?
16
Are there words which consist of katakana and hiragana letters together?
1
Something that can be written with kanji but not with kana?
2
Furigana: Usage and application
14
Usage of Encircled Kanji
0
“Left hemisphere (wing) overview” — 「 左ウィング・上x 」
3
When is it ok to use ドロー instead of 描く?
9
Why are Japanese fonts different to Chinese?
2
Can Japanese be written without any kana (kanji only)?