Help with identification and translation [closed]

Want to improve this question? Update the question so it focuses on one problem only by editing this post.

-I only started working on Japanese last night.-

I have a rather low resolution image taken from a computer game. I have managed to use handwriting detection tools to transcribe the kanji/kana to text, after using a few websites it was clear that the translations weren't very good, and only served to give a glimpse of the true meaning.

To that end I am asking for a little proofreading from more experienced Japanese speakers; First I shall post the image I used as reference (actually 4 images I glued together), then discuss my transliterations and translations. 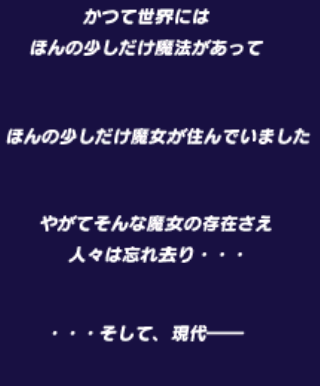 I believe the Japanese text is...

I'm pretty sure this is correct, I know that "魔" definitely is, and the rest 99% sure, but who knows.

Now for the exciting part, the translations.

かつて世界には
In the history of the world(1)
ほんの少しだけ魔法があって
there has been little magic,(2)

ほんの少しだけ魔女が住んでいました
and there lived only a few witches.(3)

やがてそんな魔女の存在さえ人々は忘れ去り...
Such as it was, in the end the existence of witches was completely forgotten about by everybody...(4)

1: The object is "the World" as per "世界には" and the subject is "かつて" (I think that is how it would be described). A literal translation could be "Speaking to (of) the world before." I am taking it contextually to be about the worlds history.

3: In this part the object is "魔女" (witches) but I took "が" (ga) to mean that it was a new sentence, but felt it read better in English as an addition to the previous phrase. The verb is "住んでいました" (sundeimashita), to live, dwell, exist. The remainder "ほんの少しだけ" all seems to be in reference to quantity so it seemed obvious.

4: The object here is "人々は" Which I am reading as everybody, and the subject is the existence of witches as per "魔女の存在さえ" (Even the existence of a witch), which I am pluralising here. The verb "は忘れ" (to forget completely) is supported by "やがて" (In the end, eventually) and "そんな" which I am taking full advantage of with it's dictionary entry of "such (about the actions of the listener, or about ideas expressed or understood by the listener)" as a reference to the premise set up in the first two sentences.

To help me disassemble the sentences, after that I passed pretty much every participle into wiktionary/wikipedia/dictionaries.

So I gave my reasoning.

Do you feel this is a good translation?

Does it captures the contextual meaning and provides a good interface to it via the English language?

Am I working under any false misconceptions obvious from the way I discuss the subject?

Here's my own shot at a translation:

In the past, in (this) world,
Just a little bit of magic existed and,
Just a few witches were living.
In the end, even the very existence of such witches..
was completely forgotten.
.. and thus.. The present:

I mostly agree with your point-by-point reasoning, and given my limited Japanese ability, I think your translation is largely accurate, up to subjective questions of nuance. As per comments, it would probably be good to ask specific follow-up questions.

For かつて, "In the past" might be a more "direct" translation than "in the history of the world", and seems to fit the "deep-voiced dramatic narrator setting up the story" context a little bit better. As per kuchitsu's comment, you could go one step further and use "Once upon a time" in a looser translation.

I'm not sure I like the "Such as it was" though. I read the そんな as referring to the witches, so そんな魔女 "those witches", or "such witches". Since we also have さえ (which is a rather strong "even") and 存在, I would go with a translation that really emphasizes that "no trace/memory" was left in the general populace's minds. That's why I went with "In the end, even the very existence of such witches".

It seems from your translation notes that you are a little bit confused about "subject", "object", "topic" and how these are case-marked in Japanese (which, given that you just started, is quite natural. I'm still often confused myself, after four years of study, two in Japan). Japanese uses a NOUN-PHRASE + CASE-MARKER pattern where case markers are post-positional particles like は が に を で, and act somewhat similarly to English prepositions in terms of linking noun-phrases to verbs. Explaining all of these in depth is both beyond the scope of this post (and beyond my own abilities), but here are some points specific to your post:

Regarding your point 1: かつて isn't really subject nor object, it is a time-specifying adverb. 世界 is both a "topic" (marked by は) and a type of "indirect object" (marked by に). Topic-marked nouns become part of the "recent context", possibly for an extended period of time (for example, "the world" is topical for the entire introduction). Multiple topics can be active at once, they can be layered, contrasted, and sometimes used as implicit subjects, which is one of the reasons learning は is difficult. Most other case-marking particles, including に, are often only 'in effect' for one verb (or verb chain), in this case 住む and the linked ある. In this case, に answers "where" the magic/witches were (the world).

Regarding your point 3: Note that が does NOT necessitate that it is a new sentence, and in fact あって is likely a conjunctive form of ある here, so reading the two phrases as a "single sentence" works in Japanese as well. Also, we usually refer to が as marking the "subject", not "object". を is the typical "direct object" case marker. は marks a "topic" (see above), which is sometimes also a subject (in which case the が is omitted), but sometimes not.

Regarding your point 4: Here, in 人々は, 人々 is the "topic" (は), and it is also the "subject" of 忘れ去り (but が is omitted because it is already marked with は, so we have to deduce that it is the subject in other ways). The "object" would actually be 存在. You are correct to pluralize "witches" here - Japanese is much less explicit about "singular vs plural" than English, so we have to use context. You might note that earlier I said that "world" is topical throughout the whole thing. Topics can be layered like this, and 人々 as "people of this world" is a reasonable way to parse this (in other words, 人々 as a sub-topic). は is very context sensitive.