Why are some words written backwards on trucks

I was driving the other day and saw a truck with 一般 written as 般一 on the drivers side door. My wife was telling me that this is often the case with trucks, where it is actually written from right to left in 縦 style, as if there was only 1 row. Just was wondering if there was a particular reason for it or if this is limited to just trucks or can this be found elsewhere.

Of note, it was NOT written flipped so as to be seen correctly when looked at through a mirror like ambulances and such in the U.S.

Note: This question is on the border in terms of being off-topic, but since it is referring to language use within Japanese culture, I felt it was appropriate to ask.

Matt's answer is right enough, and Axioplases's description does have historical accuracy, but I felt differently enough to propose another answer.

First, here is the truck in question, with the words カンガルー便 written on the side, "backwards". 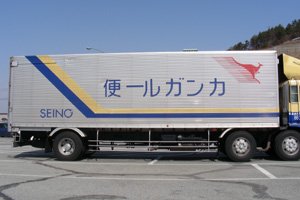 Note, though, that the text for the parent company, Seino, is the "right" way round, presumeably because it's in romaji, which is not as flexible as Japanese kanji and kana in terms of direction. If this were simply a matter of viewing the car in a "front is top" concept, then why not also include the romaji? It's only the Japanese text that is flexible enough about direction.

How flexible is Japanese in terms of direction? A little. The root of the issue lies in the fact that Japanese text is traditionally written vertically. The choice to go left or right when writing horizontally is, or was, therefor somewhat arbitrary. Back in the day, one would have come across writing right to left more than today, as in this old train sign: 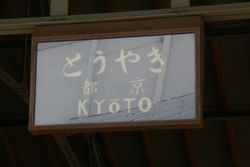 Or how the car brand "Ford" is written ドーォフ (or ドーオフ) on this Taishō era building: 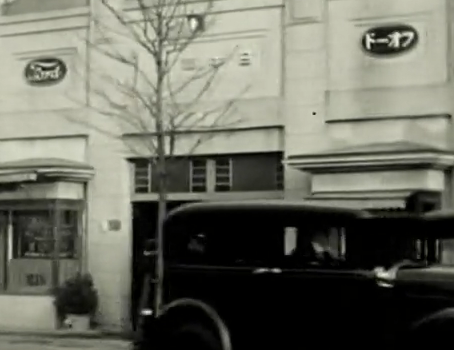 Or in this awesome political map: 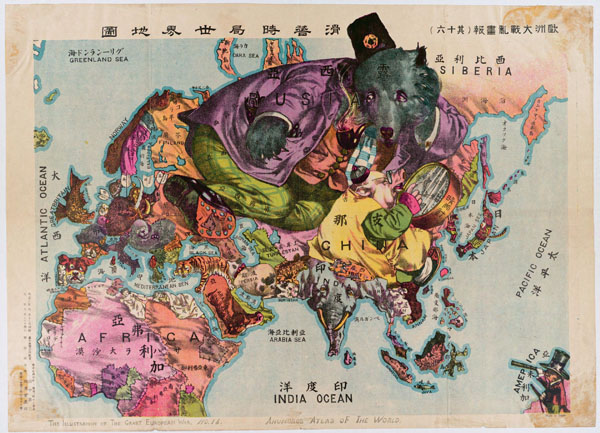 Note in all these pictures that the romaji offered goes left-to-right, but both kanji and kana are right-to-left.

Why do these historical examples matter? Because it's evidence that there is a cultural basis for accepting text right-to-left that makes the truck sign possible in Japanese culture.

What I'm driving at is the contrast with English culture where the direction of text is 100% locked in to be left to right. If a hypothetical delivery company in an English country wrote "Yreviled Ooragnak" on the side of their trucks, because they wanted to follow a "front is top" logic, or any other rational, no one would have any doubt they were doing something wrong. The horizontal direction in English is non-negotiable, with the only exception being deliberabe subversion of the norm in some kind of artistic context.

Of course, the massive exposure to English text has influenced textual presentation in Japan, to the point where you don't see this much anymore. But it's not a rule that writing must go left to right, and some people will still go right to left, like this racist jerk here, who probably did it precisely because he doesn't want to play by the west's rules (Just so its clear, although the text direction supports my point, the content of this jerk's sign is unredeemable, and I strongly oppose the sentiment):

So the "backward" phenomena is not just about vehicles or flags, or a front-as-top logic. Japanese text, insofar as it has escaped English cultural hegemony, can be flexible about which horizontal direction it goes in. Why exactly Seino opted to go right-to-left on the right side of their trucks, I'm not sure, I just know that the option to do so existed for them because the language permits it in a general sense.

Maybe right-to-left writing will die out, as it does seem to be the exception these days. Or maybe not. Consider this nostalgic retro-branding of a biscuit box, made available in 2014, preserving the right-to-left writing, for the Japanese text only, to give an old-timey feel. Maybe one day a retro trend will spark a revival... 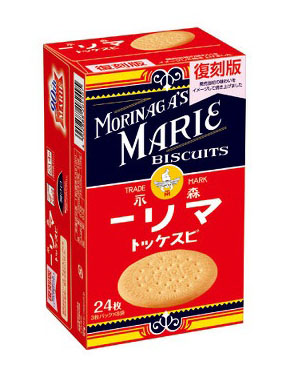 What I'm pretty sure you won't see, though, is bottom-to-top. The text direction is not that flexible.

There are two different issues to consider here.

The first is right-to-left horizontal writing as explained by Axioplase. (Note: Sometimes this is considered a special case of vertical writing, with columns of height one as your wife suggested. This is not necessarily the case. For example, the ー (choonpu) is always written horizontally rather than vertically in these situations, which would indicate that the writing is indeed "horizontal". But that's a side issue.)

But I don't think that this is what you saw. [edit: I overstated this point. Right-to-left writing is obviously what you saw, but my point is that there is a reason for the right-to-left writing in this point, and it isn't just "sometimes Japanese is written that way."] I think you saw a similar but different phenomenon. I don't know the right phrase to google up a detailed explanation, but think of the way that most flags have an obverse side (that we all recognize) and a reverse side which is the mirror image of the obverse side (so that the design nearest the flagpole stays nearest the flagpole even when the flag is viewed from behind). The same principle is often applied to writing on Japanese vehicles.

So, viewed from the left (passenger's side), it says 一般. The 一 is nearest the front bumper, the 般 is further towards the back bumper. If you want to maintain this state on the driver's side, you have to put the 一 on the right. So you get 般一. I bet that if you had gotten a look at the passenger's side of that truck, it would have said 一般 in regular order.

It think it is to make it easier to read off a running car. When a person staying still at a side of a road watches a car passing by, it is easier to read if the letters run from the front of the car to the rear because the letters will flow through the eyes of the person in the correct order. That is why you see this more often with trucks that have longer body and longer message rather than with shorter cars. If the characters were to be written left right on the right side of a truck, a reader has to skim thourgh the characters (moving their head) faster than the speed of the truck.

For ambulances in police cars, I thinks it's often written in mirror on the front of the vehicle.

For the side of the trucks, yes, this is quite common. It can also be found on the billboard of restaurants, and on reprints of old beer posters.

This has a name: 右横書き. It was used before WWII, when horizontal writing was applied to Japan during Meiji, but never really made it outside the corner cases I just cited: left-to-right had more success.

On trucks and other vehicles I've mostly seen it written "backwards" on one side and in the more common direction on the other side.

But to me the much more usual place to see such "backwards" writing is on the traditional signs on traditional gates such as are or were part of castles, city walls, etc.

(I quote backwards because one way of looking at Japanese writing is that it doesn't have a correct direction, just a more common one, with the other also being used.)

4
What is the meaning of 巻ノ + number next to a book?
3
Under what circumstances does Japanese read from right to left?
-1
How would I write this for a graphic design?

16
What do you mean, "In Japanese there are no words for "I’m suffering""?
24
Why are police boxes labeled Koban (in roman letters) in Japan?
9
Why are Japanese fonts different to Chinese?
1
Cultural question: Why「本当？」and「んだ？」are so popular?