Do all kanji parts have a meaning?

I'm beginner in Japanese, and I was analysing some kanji. I was noticing the parts of 燃. I see a dog there, a fire, another fire, and then there is this 夕 with two strokes in the middle instead of one, that apparently, as far as I could look it up, doesn't actually have a meaning, or does it? If not, is there many kanji with meaningless parts like this? How does it come to be?

'夕 with two strokes' is indeed a radical you can look up -- in particular it's the 肉 (meat) radical. Radicals can have different appearances (variants), just like the two appearances of the fire radical 火 in 燃.

The reason why the fire radical appears here twice is this: the meaning of 然 in Old Chinese really was the same as 燃 (to burn)! Later in the development of the Chinese writing system, the sound of 然 was borrowed for its present meaning, and then the original character had the fire radical added to represent its original meaning.

A similar process, where for a certain character a new meaning comes to replace the old meaning, and a radical is added to represent the old meaning, happened to many other characters. One example is 雲, the original form of which was 云 (which is now used in its borrowed meaning of 'to say').

The original meaning of 然 was "to roast dog meat over a fire", which was broadened semantically to "to burn". Hopefully it's now clear why there's a 犬 in there.

To answer your general question though: "do all kanji parts have a meaning", the answer is no. A character can't necessarily be broken down entirely into semantic "atoms". See the Wikipedia article on phono-semantic compounds for an example of non-semantic character components.

Yes, not all, but many parts constituting a 漢字 have meaning(s).

If you wish to learn what an individual element constituting 漢字 signifies, I recommend you read 「常用字解」 written by Dr. Shirakawa Shizuka, published by Heibonsha, as a handy and instructive manual.

The base of 燃 is 然, which signifies the action of burning (roasting) the meat of dog being offered as a sacrifice to the Heavenly God. The 月, a part of the character is a simplified form of 肉 (meat).

However, 然 grew to mean 然れども (but, however) side by side to the original meaning of 「然」 later, and it became necessary for Chinese to differentiate the usage of 然 from 'however' to "burn' by developing a new character. So, they added 火 (fire) to the existing 然 as a quick method. The creation of 「燃」 was made in Hang Dynasty after the 2nd century B.C.

An additional note in response to some of the comments and questions below:

Good question. Actually I thought about that myself several times and could not come up with a clear answer. Here I will just try to answer to your specific case.

If you look up 燃 on some dictionary, such as here, you will find that it just reports the radicals (部首) that in this case are 火 and 灬 (both fire).

Anyway, if you look 燃 up on a different dictionary such as Midori you will see that it actually you get a link to 然 and interestingly it decomposes this the character in 月、犬、and 灬. And if you look closely it makes sense. The top left part could indeed be a moon (EDIT: apparently it is actually "meat" and not moon, they just look the same).

Edit: So at least for this kanji yes, each part has a meaning apparently. As pointed out in another answer it seems that Midori's interpretation is not even correct though.

I could not find an online version of Midori so I will put a screenshot here: 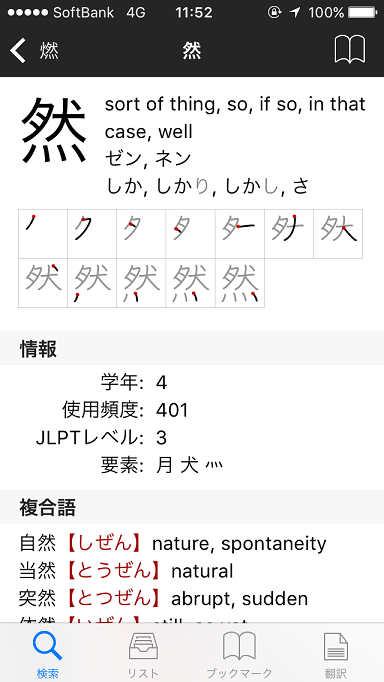 13
How do I look up this kanji?
7
Why don't radicals have the same definition for all kanji?
10
Is the kanji/kokuji "taito" (たいと) with 84 strokes legitimate and ever used?
3
Usage of Heisig radical "big"
22
Is exact Kanji stroke length important?
6
Unknown Kanji on Mountain Rock
1
How to determine the meaning of a Kanji?
5
Reversing stroke direction in kanji for left-handed writing
2
Alternative kanji forms, i.e., 「滲みる」 vs. 「染みる」。